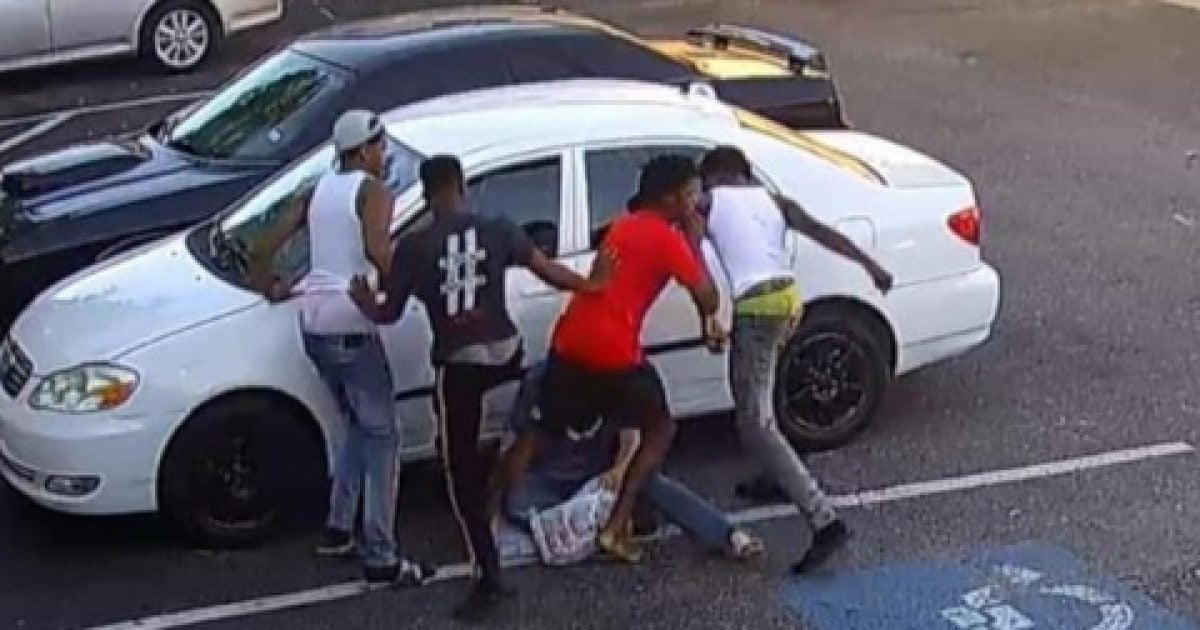 A Texas man was the victim of what police are calling a “brutal attack” by a group of thugs who punched and kicked him outside of a gas station convenience store.

The unidentified victim was seen in the disturbing surveillance video as he was set upon by a group of men who knocked him down and proceeded to attack him outside the Food Mart store in Harris County.

Authorities are looking for the suspects who fled the scene after the attack on the 24-year old which occurred in Klein on Sunday.

The victim informed deputies with the Harris County Sheriff’s Office that a group of young men tried to cut in front of him as he waited in line to pay for his items in the convenience store, according to Houston’s KTRK-TV.

“I looked over and said, ‘There’s a line for a reason,'” the victim said, adding that words were exchanged and the group mocked his hair and clothes.

Once he exited the store carrying his shopping bags, he was attacked by the group as they repeatedly kicked him, leaving the victim helpless against the group onslaught.

“I don’t know what else I could do,” he said. “The fifth one at the end came out of the store after purchasing goods, and came up to me and kicked me in the face and said, ‘Black lives matter, (expletive).'”

Still photos were released from the scene in an effort to help the Harris County Sheriff’s Office in identifying the suspects.

HERE ARE SOME STILL PICTURES OF THE SUSPECTS IN THE BELOW CRIME !!!

This is a video of a male being attacked by other…

The victim refused to seek treatment, according to deputies, though he did sustain bruises, a swollen lip and a cut near his eye.

“I really hope they’re caught before someone else gets hurt,” his girlfriend said. “I hope that the people take this and don’t say, ‘It’s white against black.’ I don’t want this to be the statement. I want it to be, here’s a man who was checking out and stood up for himself and he was targeted for that.'”

“His face was all bloody and he was holding his bags,” Kelli told the outlet.

“I was just sitting there on the ground kind of in shock, I didn’t know what to think,” Mason explained to KPRC, adding that he believed the suspects ranged in age from 15-24.

“That’s not what the (Black Lives Matter) movement is about,” Mason said. “Not to be used as an excuse (for violence).”

“That’s not what this movement is about,” his girlfriend agreed. “It’s really heartbreaking to see that being abused.”