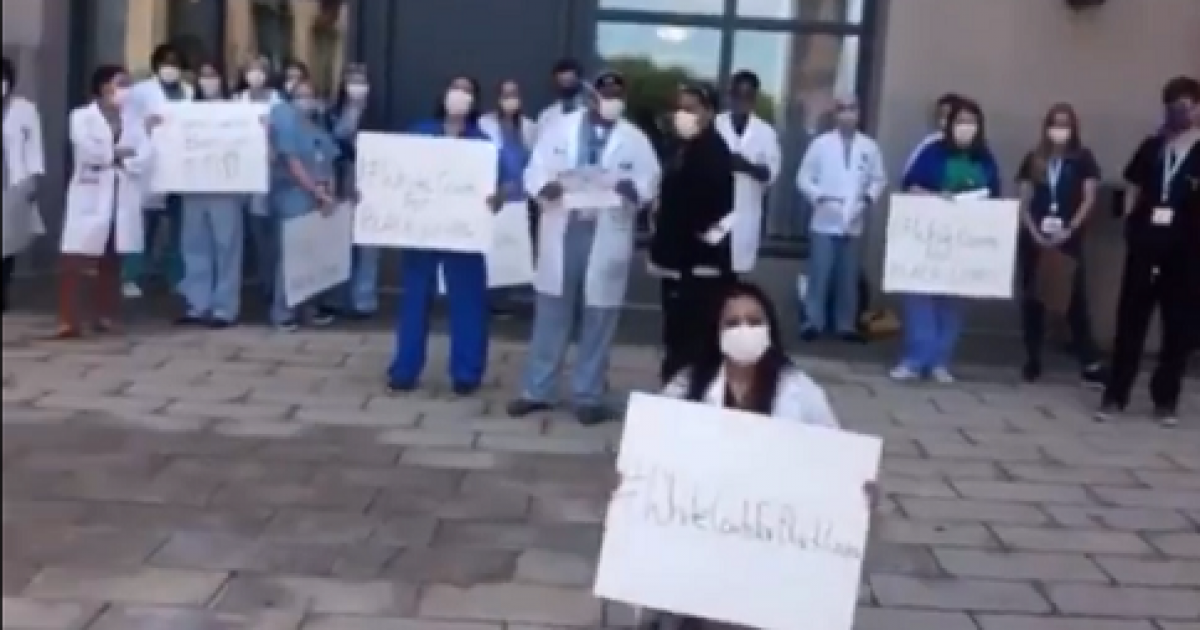 A video making the rounds online exposes the rank hypocrisy behind the Black Lives Matter movement, which has become a runaway train following the death of George Floyd, despite all the violence associated with the movement.

In the short clip, a black man confronts a group of health care providers protesting in front of a hospital in support of Black Lives Matter to ask about aborting black babies.

“Do all black lives matter, or just some black lives?” the man asked.

Proud of themselves for being woke to the latest cause du jour being propagated by the liberal media, the medical workers dutifully reply in unison, “All black lives matter.”

The man then throws them for a bit of a loop, asking, “The black lives killed by black men matter, right?”

Not quite as sure of themselves now, with the dynamics getting more complicated, the group hesitantly replied, “Yes.”

And that’s when he dropped the bomb, “The black babies killed in the abortion clinics matter, right?”

It was so quiet you could hear crickets chirping, as the man then said, “Thought so.”

He establishes that, in their eyes, Floyd’s life mattered, before adding, “But the black babies killed in the abortion clinics don’t matter, do they medical people?”

“Do their lives matter? Does the future of our black babies matter?” he added.

Other than a few individual catcalls, the group remained quiet.

“It’s okay if we kill them in the womb, right?” he asked.

“If we don’t respect the lives of our unborn children enough to save them and fight for them, our lives mean nothing when we are born,” the man concluded.

As noted by Life News, 247 black babies are aborted every day at Planned Parenthood, the nation’s largest provider of abortions.

As for the hypocrisy of the left, the accompanying article, by Ryan Bomberger, who is biracial, nailed it in a single paragraph:

Abortion is the leading killer of black lives in America outnumbering the top 15 causes of death—combined. But we’re supposed to celebrate this as some perverse form of justice? In fact, they have a name for it—reproductive justice. So, when more black babies are aborted in NYC (the home of Planned Parenthood) than born alive, it’s not racism; it’s feminism. We’re supposed to pretend that the reportedly ubiquitous “white supremacy” that allegedly stains every facet of American life doesn’t apply to an industry, birthed in eugenic racism, which disproportionately kills black and brown lives?

“As many as 79 percent of Planned Parenthood surgical facilities were built within walking distance of African-American and Hispanic neighborhoods,” the pro-family organization noted. “So if black lives matter to them, it’s to their bank account.”

Turns out, an unintended “star” of the video is the woman who stepped forward to take a knee. Here’s a quick sampling of responses to the story from Twitter:

One of the biggest problems with Black Lives Matter is they don’t believe black lives matter unless they’re lives they can manipulate to fit their narrative. Do black lives in Chicago who die from gang violence matter? Do aborted black babies matter? Did David Dorn’s life matter?

This is awesome! This is how you expose hypocrisy.

The lady coming to the camera and kneeling. Cringe is an understatement🤦🏽‍♂️

Wow!! He spun that around on them real quick. I can’t believe how silent and confused they acted.

#BLM will we see you protesting at planned parenthood?

“All of our problems are the result of overbreeding among the working class… Knowledge of birth control is essentially moral. Its general, though prudent, practice must lead to a higher individuality and ultimately to a cleaner race.”
— Margaret Sanger