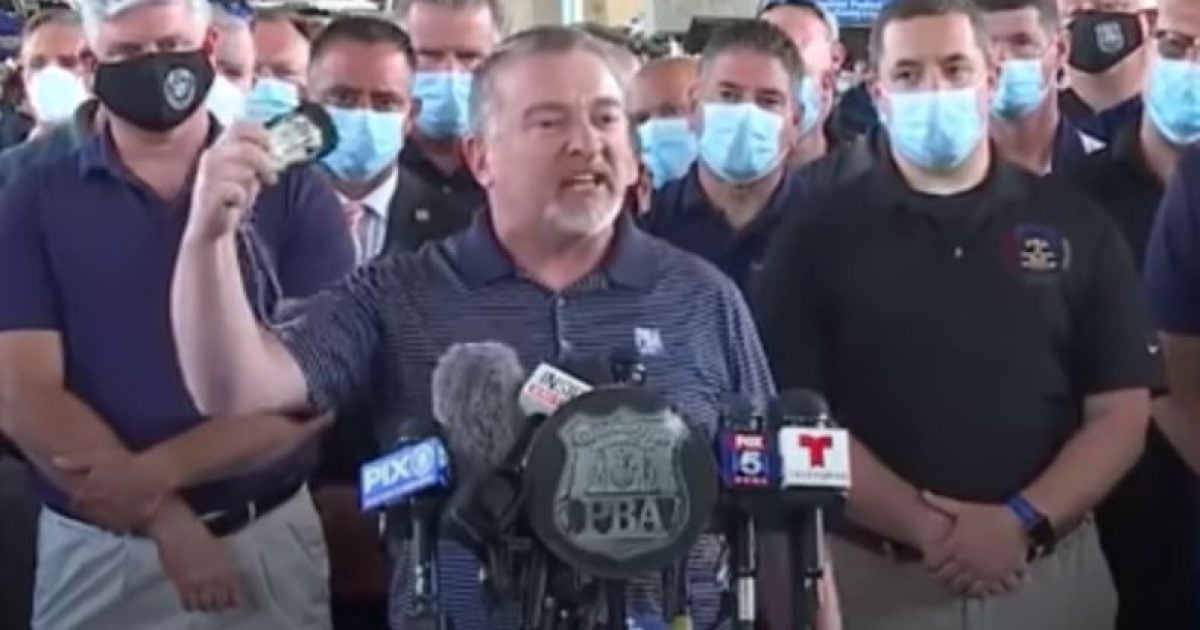 Mike O’Meara is the president of the New York State Police Benevolent Association. He said the wholesale demonization of police because of one bad cop (Derek Chauvin) is destroying cities and endangering the lives of millions of law-abiding Americans.

“Police have 375 million interactions with the public every year — overwhelmingly positive responses,” O’Meara said. “But we all read in the paper that in the black community, mothers are worried about their children getting home from school without being killed by a cop. That does not happen!”

O’Meara made his emotional statements to underscore that the false media narrative being pushed around-the-clock is based on the lie that all cops are racists who are hunting down black men.

Keep in mind that in major cities across the United States, many of the cities’ police chiefs are black, as are many members of the police force.

“Everybody’s trying to shame us into being embarrassed of our profession,” he said. “This [our police badge] isn’t stained by someone in Minneapolis.”

Blaming all cops and all whites for a killing committed by one bad white cop is like blaming all black people for all crimes. That is the embodiment of racism — something the left claims it’s protesting.

“We roundly reject what he did as disgusting,” O’Meara said. “It’s not what police officers do. [Chauvin] killed someone. We are restrained.”

O’Meara added: “Stop treating us like animals and thugs, and start treating us with some respect! We’ve been left out of the conversation. We’ve been vilified. It’s disgusting!”

Author Horace Cooper says Democrats and their media lapdogs are scapegoating the police to deflect attention away from the Democrat Party’s abject failure to help black Americans.

“There is a class of Americans whose entire livelihood is based on the existence of victims,” said Cooper, the author of “How Trump is Making Black America Great Again.”

Cooper continued: “We’ve spent $22 trillion and all we’ve done is enriched the ‘problem-solving’ class and we have not done the basic things that would be good for Americans black, white or brown.”

Cooper said race-baiting, grievance-mongering grifters (like Al Sharpton and Maxine Waters) can only maintain their grip on power by stoking racial resentment.

“There is a strong sentiment among the so-called problem-solving class to keep things as they are,” he explained. “If [black] people got a good education, if people had great jobs, if people controlled their own lives, a large number of [race-baiting grifters] couldn’t get that new auto, they couldn’t go off to Aspen for their ski trips.”

Horace Cooper said the so-called “problem-solvers” don’t encourage black Americans to excel but instead promotes welfare dependence and a victim mentality that blames white people for all their problems.

“How about tutoring? How about encouraging math?” Cooper asked. “It is ironic to me that Washington, D.C. — with one of the poorest populations that happens to be black — was rushing to legalize marijuana. Marijuana isn’t the answer to the problems that poor people face! Why aren’t we encouraging black people to strive, achieve, make improvements?”

Cooper continued: “There was a time — from the 1920s up to the 1950s — when black Americans were actually more literate, more likely to graduate from high school, and more likely to have stable families than the population as a whole.”

Once Democrats started running America’s big cities, many cratered into poverty and lawlessness, thanks to the left’s destructive policies.

For example, did you know that in the 1950s, Detroit was the richest city in the world? Now, it has devolved into a crime-ridden ghetto.

“We pretend that what we see today is the way that it’s always been,” Cooper said. “That’s just the way that it has been since the ‘problem solvers’ have been in charge.”

Cooper also blasted former President Barack Obama for encouraging the victim mentality among blacks instead of instilling a message of hope.

Obama, who’s half-black and half-white, was lovingly raised by his white mother and his white grandparents. Still, he blames whites for all the problems facing black America.

“We had a president — a black man who came from circumstances of struggle — who rose up and got to be president,” Cooper said. “He is an example of what’s possible in America. And instead of telling people that, he said, ‘America is a place where you don’t have a chance.’ He said, ‘You can try all you want, but it’s not going to work out for you.’ And that has taken hope away.”