New Mexico’s Democratic governor Michelle Lujan Grisham is being called a hypocrite for making a frivolous jewelry purchase during a statewide lockdown that she ordered.

Lujan-Grisham is the first Hispanic Democrat to be elected governor in U.S. history.

In April, Lujan-Grisham called a jewelry store to purchase a bauble (a non-essential item) shortly after ordering the mass shutdowns of all businesses in New Mexico.

Several days after issuing her lockdown order, Lujan Grisham called the Lilly Barrack jewelry shop in Albuquerque and ordered an item over the phone.

“There were no state guidelines broken,” Grisham’s rep said. “It was an entirely contact-free purchase.”

Actually, Grisham did violate her order because curbside pickup wasn’t allowed in New Mexico until May 1.

The New Mexico GOP blasted Grisham’s hypocrisy and lies on Twitter: “Our Governor is the latest Democrat to decide that the rules they impose on their citizens to address the COVID-19 pandemic don’t apply to her.”

Our Governor is the latest Democrat to decide that the rules they impose on their citizens to address the COVID-19 pandemic don’t apply to her. A bombshell report reveals that the governor violated her own stay-at-home order to stock up on some high-end jewelry.

GOP Chairman Steve Pearce said: “It’s shocking that the governor would go behind people’s back and break her own order just to benefit herself. She’ll go to any lengths to get her way and refuses to take care of New Mexicans in a fair and just way. This was really disgraceful, especially since so many people have been hurting for so long.”

After being caught in her lie, Governor Lujan-Grisham then disingenuously claimed that she made the jewelry purchase during the shutdown to “support a local business.”

At the time Grisham bought her trinket, local New Mexico businesses had accused her of “killing us” with the shutdowns.

Martin Hicks, the Democratic mayor of Grants, New Mexico, said Grisham’s shutdowns were “killing” the city and slammed her “Gestapo” tactics. “The governor is killing us! She’s totally killing us,” Hicks said.

Mayor Hicks said the city was collapsing financially and that 80 local businesses were forced to close their doors due to Governor Grisham’s executive order.

New Mexico mayor to defy lockdown and reopen city: ‘The governor is killing us!’ https://t.co/LX5zNVH7NL pic.twitter.com/uuxcUgVyMP

New Mexico (population: 2.1 million) has so far attributed 308 deaths to the coronavirus. Given these statistics, why is the entire state in a lockdown as restrictive as coronavirus epicenter New York?

Americans wouldn’t be so enraged over the draconian, one-size-fits-all lockdowns if Democrats weren’t caught repeatedly violating the orders while browbeating everyone else to remain under house arrest.

In April, Chicago Mayor Lori Lightfoot — a Trump-hating Democrat — went to her hairstylist to get her hair done at a time when she was fining other Chicagoans $500 for violating a state-mandated lockdown.

Chicago mayor defends getting haircut after her $500 stay-at-home violation fines: ‘I am the face of the city’ https://t.co/mteh62adeO pic.twitter.com/y9Ntp5Bp2x

This week, several Democrat congressmen claimed they couldn’t be in Washington to work because of the coronavirus crisis. However, they were spotted in Florida gleefully attending the SpaceX/NASA rocket launch.

Wishing @AstroBehnken and @Astro_Doug the best of luck as they lead us into a new era of space flight. Honored to be at @NASAKennedy today to experience this milestone! pic.twitter.com/CVxJ7KK6on 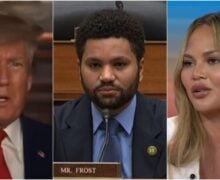