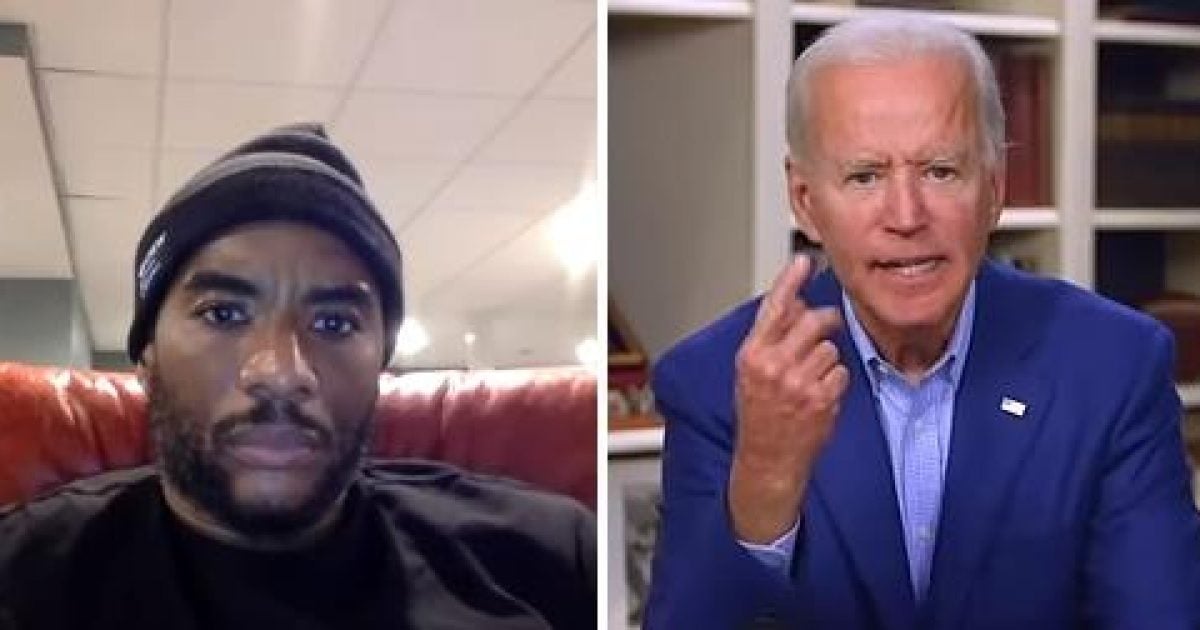 During a radio show interview Thursday, presumptive Democrat presidential nominee Joe Biden told a black radio host that he “ain’t black” if he’s still mulling over who to vote for in the upcoming 2020 general election.

The stunning remarks triggered outrage from a spate of black Americans already disgusted by the Democrat Party taking their votes for granted.

The remarks were made during the tail end of Biden’s interview with Charlamagne tha God, the co-host of the “The Breakfast Club” radio show.

The clip above began with the former VP’s aide telling Charlamagne, “That’s really our time. I apologize.”

In response, the radio show host jokingly replied, “You can’t do that to black media!”

Biden promptly pointed out, “I gotta do that to white media and black media because my wife has to go on at 6:00.”

Charlamagne replied, “Listen, you gotta come see us when you come to New York, VP Biden, because it’s a long way til November. We got more questions.”

That’s when Biden uttered the following stunning remark: “You’ve got more questions? Well I tell you what, if you have a problem figuring out whether you’re for me or Trump, then you ain’t black.”

Charlamagne responded, “It don’t have nothing to do with Trump. It has to do with the fact I want something for my community.”

The clip concluded with Biden touting his allegedly pro-black record.

By Friday morning, the clip had gone viral and provoked massive backlash from black Americans — particularly conservative black Americans — who are fed up with the Democrat Party’s longtime belief that they’re owned the black community’s vote.

Critics were also angered by Charlamagne not calling Biden out.

If @realDonaldTrump said this there would be riots in the street. I held picket signs and protested segregation, while Joe Biden fought for it. I will proudly support Trump, let’s see him tell me to my face I’m not black.

Joe Biden says vote for him or you’re not black. One of the dumbest thing you can say to a black person. Insulting, demeaning, and racist. Do you agree?  

Black people: You DO NOT owe anyone, any party your vote.

You don’t have to pick.

Let them fight for it, each & every time.

That’s the truth they don’t want us to know.

Joe Biden does not get to determine who is black and who isn’t. He is not entitled to the votes of black people and after this racist comment, he should not get any votes from the black community. pic.twitter.com/f5gZ8WwMYq

Hey @JoeBiden, I am black and I’m having no problem figuring out whether to vote for you or for Trump.

It’s Trump 100%. Now enough race baiting and start explaining why your son has a $1.5 billion contract with China.

“If You Have A Problem Figuring Out Whether You’re For Me Or Trump, Then You Ain’t Black” Joe Biden in 2020

This type of bigoted is so low it needs to stay quarantined in a basement like @JoeBiden! #BlackVoicesforTrump #BeBest pic.twitter.com/jHwTkPzbg9

According to my DNA, genetically Nigerian, so neither @JoeBiden or @breakfastclubam can decide if I’m black.

WTF…because I don’t support your failed policies. Things like the 94 crime bill, Obamacare and others “I ain’t black” based on @JoeBiden‘s words. That is basically saying the Dem party owns me because of skin color. I wonder if Rep. Wexton feels the same way. #VA10 https://t.co/CC2jRHrwvh

The latter Twitter user, Jeffery A Dove Jr., a U.S. Army combat veteran running in Virginia as a Republican for a seat in Congress, noted furthermore that Biden’s record is anything but pro-black.

Antoine Tucker, another black conservative running for Congress, expounded further on Biden’s anti-black record in the video below

.@joebiden you’re a racist and a Blatant one at that! https://t.co/etMsHpBDcK pic.twitter.com/clRyd9S8RS

“Joe Biden is a f—ing stonecold racist, period,” he bluntly said in the clip above.

It would appear so, for the notion that someone is obliged to vote for a particular political party solely because of his or her color of skin is indeed racist. For in a fair, equal and meritocratic society, every candidate has to earn a vote by merit alone.

But Biden appears to feel otherwise …

The clip seen up top wasn’t the only example of the former VP’s aide trying to cut off the interview. In another clip seen above, the same aide could be heard trying to end the interview as Charlamagne tried to question Biden about his crime bill:

.@JoeBiden staff tries to cut off his @breakfastclubam interview as he’s being asked tough questions about his 1994 Crime Bill. @cthagod: “That won’t be the only time they try to cut the interview off.” pic.twitter.com/mm1kornpfs

“That won’t be the only time they try to cut the interview off,” Charlamagne predicted at the time.

Meanwhile on social media, reports have emerged from President Donald Trump’s eldest son, Donald Trump Jr., that Twitter is attempting to censor the video of Biden speaking “his truth” about how he really feels about black Americans.

So interesting how @twitter is censoring the racist clip of @JoeBiden telling black Americans that they “ain’t black” if they don’t vote for him.

They’re trying to protect Joe! They don’t want the American people to know about his disgusting & dehumanizing racist mentality. pic.twitter.com/H5Ch9xEKob