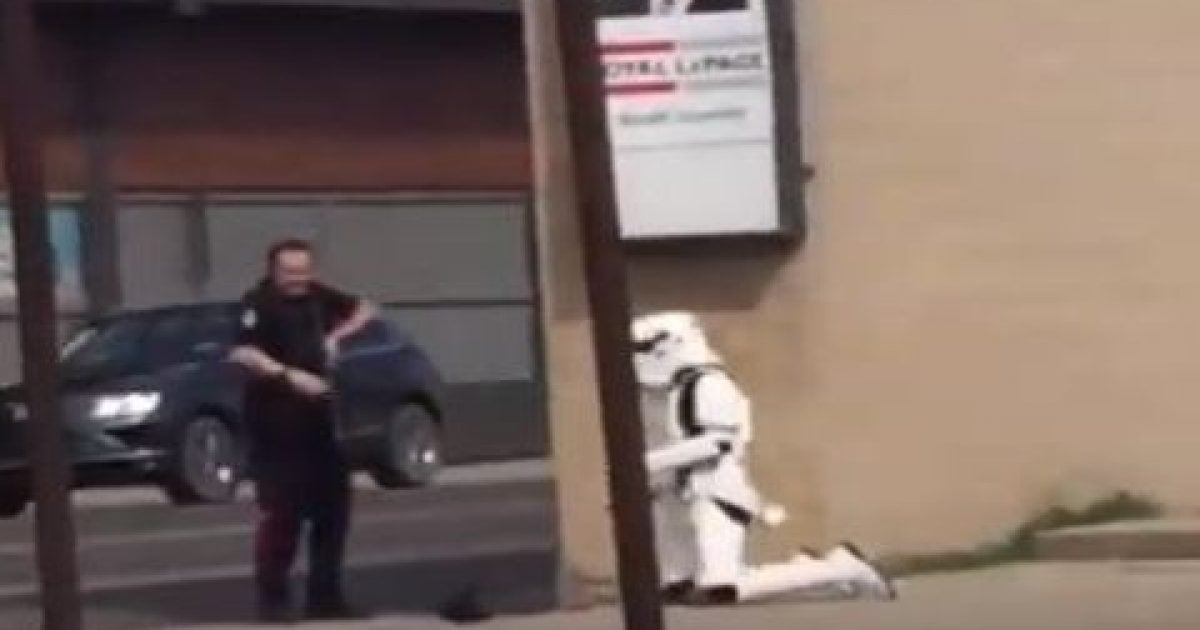 Famed “Star Trek” actor William Shatner ripped Canadian police officers who drew their weapons on a young woman who dressed up as a Stormtrooper to celebrate “Star Wars Day” in Alberta.

On Monday, as people around the world observed and celebrated the iconic science fiction series begun in the late 1970s by filmmaker George Lucas, an Alberta-based business had a female employee dress in a Stormtrooper costume, complete with a toy blaster weapon.

Shatner sent his “contempt” in reaction to a video showing officers pointing rifles at the woman and physically taking her to the ground.

The actor took to Twitter Wednesday to criticize officers with the Lethbridge Police Service over their conduct.

“Captain’s Log Stardate 49: Sending my contempt this morning to the @lethpolice of Alberta, Canada & @LPSChief1. Rifles drawn for a plastic toy Cosplayer? Didn’t comply right away? Are you blind Chief? Watch the video to see how quickly she complied. This cannot be covered up,” Shatner, 89, wrote.

Captain’s Log Stardate 49: Sending my contempt this morning to the @lethpolice of Alberta, Canada & @LPSChief1. Rifles drawn for a plastic toy Cosplayer? Didn’t comply right away? Are you blind Chief? Watch the video to see how quickly she complied. This cannot be covered up. 😤 https://t.co/b5bmllyfMU

As the videographer approaches the arrest scene, police can be heard warning him to stay away.

According to a report in Lethbridge News Now, cops said they received two calls from residents who reported potential firearms in the vicinity after coming across the female employee dressed in the Star Wars costume.

Jason Walper, a Lethbridge Police Service inspector, told the local news outlet that the young woman did not comply with officers’ verbal commands. But the video shows that the woman immediately released the plastic toy to the ground after being ordered to do so by the officers.

When told to kneel, however, the woman attempted to explain that it would be hard to do so in her costume. Nevertheless, police forced her to the ground, causing a minor injury to her nose.

Cops took the women into custody but the report said she was released later without charges being filed. But after the video went viral on social media, Lethbridge Police Service officials said they would be investigating the conduct of the officers.

“Upon reviewing the file and additional information, including video circulating on social media, Chief Scott Woods has directed a service investigation under the Alberta Police Act that will look into whether the officers’ acted appropriately within the scope of their training and LPS policies and procedures,” said a statement from the department to Lethbridge News Now.

Bradley Whalen, the woman’s boss, said he thinks that cops could have done more to deescalate the situation.

“Police officers had guns drawn, pointed at my employee,” he explained. “They were yelling at her to put the gun down so she threw the plastic gun on the ground. At that point in time when I came out, she was on her knees kneeling down on the ground. The police had already checked and seen that the gun was plastic so they already knew that there wasn’t an issue or a risk there.”