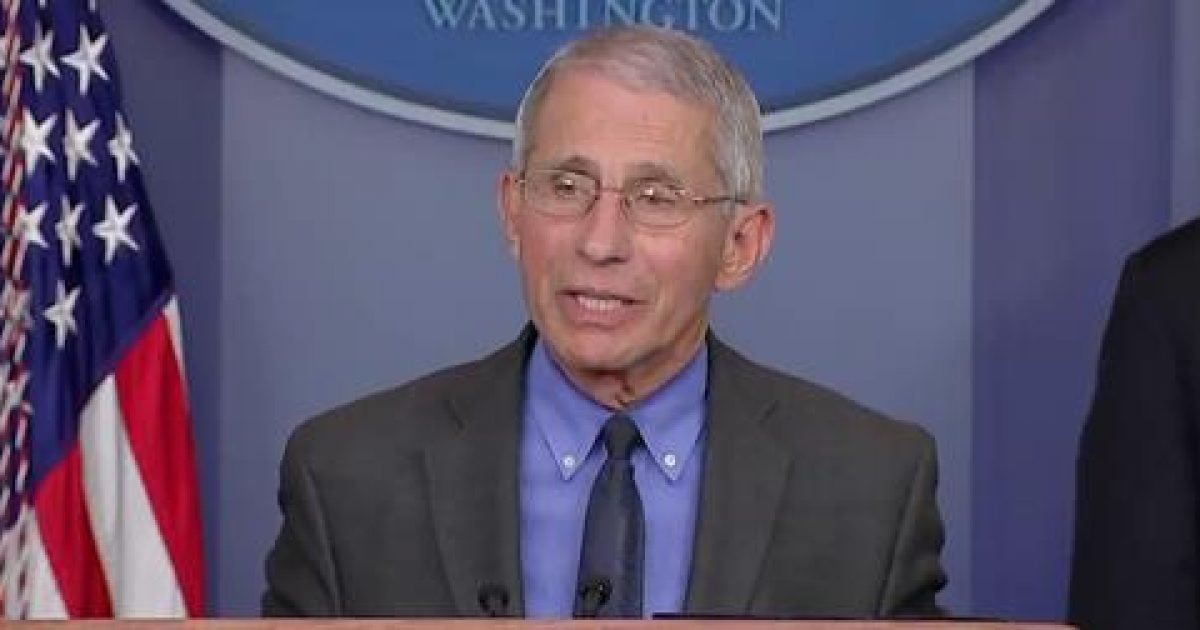 Though the ongoing coronavirus pandemic has devastated the lives of millions of Americans regardless of creed, disability, gender, race, etc., the mainstream left has begun to prop up black Americans as the ultimate victims of this crisis.

To make matters worse, the Trump administration has now effectively adopted this dubious narrative courtesy of the  National Institute of Allergy and Infectious Diseases Director Dr. Anthony Fauci, who used his appearance at the latest White House coronavirus briefing on Tuesday to further propagate it to the world.

“We’ve known literally forever that diseases like diabetes, hypertension, obesity, and asthma are disproportionately afflicting the minority populations, particularly the African Americans,” he said early during the presser.

“Unfortunately, when you look at the predisposing conditions that lead to a bad outcome with coronavirus, the things that get people into ICU that require intubation and often lead to death, they are just those very co-morbidities that are unfortunately disproportionately prevalent in the African American population. So we’re very concerned about that. It’s very sad. It’s nothing we can do about it right now except to try and give them the best possible care to avoid those complications.”

Keep in mind many of these predisposing conditions are likely the result of poor personal decision-making, not race. While this was the common sense response from scientists, pundits and society after it was announced weeks ago that the virus affects men more than women, it’s now being used by the left as a cudgel to further divide the nation. And with the race narrative ramping up, Fauci wasted no time adopting the same talking points.

Listen to Fauci below (disable your adblocker if the video doesn’t appear):

Later during the briefing, and after President Donald Trump had left the room, Fauci went so far as to compare the coronavirus’s effect on the black community to the AIDS epidemic’s effect on the gay community decades earlier.

“And as some of you know, the greater proportion of my professional career has been defined by HIV AIDS,” he said. “And if you go back then during that period of time when there was extraordinary stigma, particularly against the gay community and it was only when the world realized how the gay community responded to this outbreak with incredible courage and dignity and strength and activism that I think that changed some of the stigma against the gay community. Very much so.”

“I see a similarity here because health disparities have always existed for the African American community. But here again with the crisis, how it’s shining a bright light on how unacceptable that is, because yet again, when you have a situation like the coronavirus, they are suffering disproportionately.”

But as noted earlier, poor personal decision-making likely accounts for some of this  “disproportionate” suffering.

Over the past few weeks, countless video footage has emerged of young blacks willfully and purposefully ignoring “shelter-in-place” and curfew rules.

We don’t care about no curfew 😂😂😂😂 @iamleemoeflvme #baltimore #rva pic.twitter.com/SePvRLvjQx

They ain’t goin for no curfew in Newark, NJ pic.twitter.com/ZVfHm0A6cn

When mostly white spring breakers behaved similarly and later contracted the virus last month, the public rightly blamed them for their own woes. Yet with the black community, the blame always winds up falling on others, be it all people white or the so-called “system.”

“[I]t’s not that they’re getting infected more often, it’s that when they do get infected, their underlying medical conditions, the diabetes, the hypertension, the obesity, the asthma, those are the kind of things that wind them up in the ICU and ultimately give them a higher death rate,” Fauci continued Tuesday.

“So when all this is over and as we’ve said it will end, we will get over coronavirus but there will still be health disparities which we really do need to address in the African American community.”

But assuming these disparities are fixable via government — which of course is a dubious proposition, given as they likely exist because of personal decision-making — then why hasn’t Fauci already dealt with them?

New curious slant. Fauci in NIH for 40 years and he blames America for the underlying health disparity that cause AA to be disproportionately affected.Seems he would have done something about that w/ his work in all the other illnesses and viruses to address this in those 40 yrs.

The doctor’s remarks come amid a concerted push by the left to transform the coronavirus pandemic into a racial issue — perhaps in an attempt to drum up black votes?

To be clear, it’s true that the virus is affecting the black community “at higher rates,” as confirmed by an investigation by the left-wing outfit ProPublica.

What’s not necessarily true is the notion that this phenomenon exists because of so-called “inequality.”

Nevertheless, the “inequality” mantra is being pushed nonstop by the mainstream left.

In recent days, endless “reports” and columns have emerged specifically highlighting the struggles faced by black Americans amid this crisis, never mind the millions of other Americans who’ve also had to contend with hell this past month.

Michigan has just started reporting on coronavirus cases by race.

African Americans are 14% of that state’s population but 40% of deaths.

NYC should publish this data as well, so we get the picture here. pic.twitter.com/u0UeWZfJvA

You often hear that #coronavirus doesn’t discriminate. I understand the sentiment but the emerging picture shows that due to existing inequalities it actually does.https://t.co/Wrr0FOqmGo

Before the coronavirus crisis ever hit, 61% of African-Americans in the U.S. were experiencing the crisis of poverty & low wealth. The #COVID19 pandemic only exacerbates this inequality & continues the disproportionate impact on the black community.https://t.co/ONYtmTCK2K

Most new patients of the coronavirus in Philly are now predominantly black, raising fears that existing inequalities in the city will be exacerbated by the public health crisis. https://t.co/bKKYBrIUD1

CNN even ran a stunning piece Tuesday warning that the wearing of homemade facial masks — which President Donald Trump has recommend all Americans wear while in public to protect their health — could exacerbate alleged racism against blacks.

On social media and in interviews with CNN, a number of people of color — activists, academics and ordinary Americans — expressed fears that homemade masks could exacerbate racial profiling and place blacks and Latinos in danger. https://t.co/hgJ435erKz

The narrative is clear: Black Americans are the ultimate victims of the coronavirus pandemic.

Except according to Diamond and Silk, two black women loathed by the left for their refusal to adopt an attitude of victimhood, this narrative is some straight-up bull-schiff.

Something is off, and Something ain’t Right!