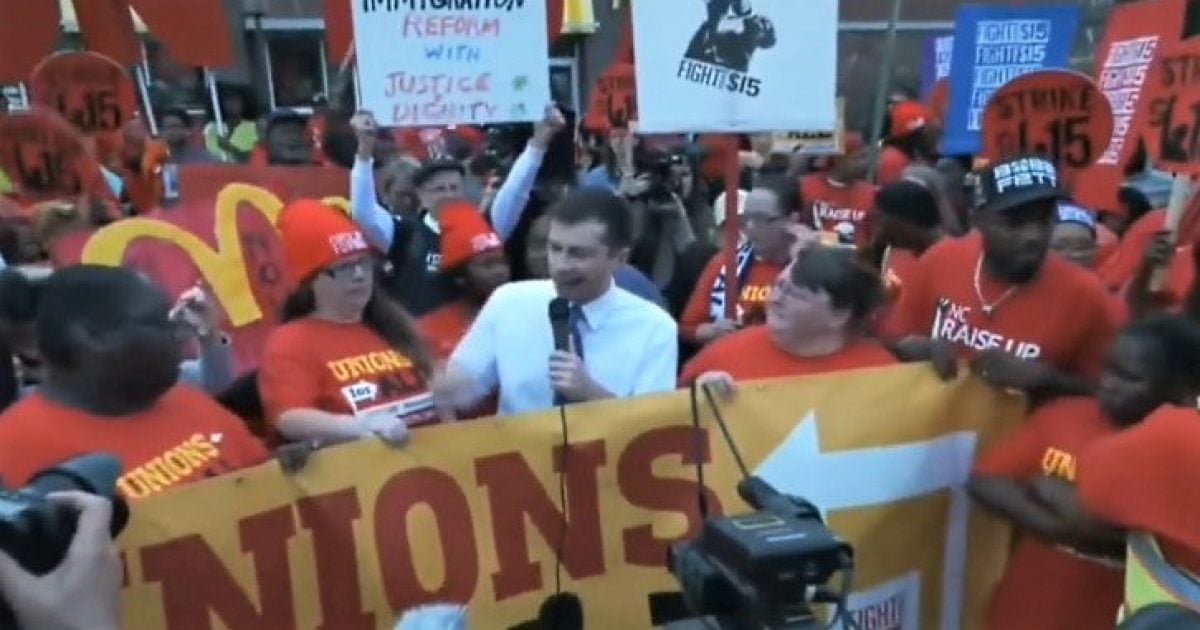 Democratic presidential candidate Pete Buttigieg was booed and shouted down by protesters during a march with McDonald’s workers who were striking for a $15 minimum wage in Charleston, South Carolina.

The rally was organized by the nationwide Fight for $15 movement, but Buttigieg tried to hijack the event to make it a photo op to promote his flailing campaign.

“No matter who you support, I support you. We support you,” Buttigieg said. “We stand together and we will not rest until one job is enough in the United States of America.”

While the former South Bend mayor was speaking, he was booed and shouted down by Black Voters Matter protesters, who chanted: “Pete can’t be our president! Where was $15 in South Bend?”

A frustrated Buttigieg cut his speech short after five minutes and quickly tried to exit the rally.

The protesters from Black Voters Matter followed Buttigieg as he tried to make his escape to his SUV. They repeatedly chanted: “Pete can’t be our president! Where was $15 in South Bend?”

This latest fiasco underscores the continuing struggle Pete Buttigieg is having in connecting to black voters. Despite nonstop pandering, Mayor Pete is polling at 0% among black primary voters.

No Democrat can win the presidential nomination without the support of black voters, especially in South Carolina, where blacks comprise up to two-thirds of the Democratic primary electorate.

The South Carolina primary election is on Saturday (Feb. 29), so time is running out for Buttigieg.

Two weeks ago, Buttigieg was confronted about the dismal race relations in South Bend under his tenure as mayor from 2012 to Jan. 1, 2020.

Specifically, Henry pointed to the criminal-justice reform that Trump initiated and the record-low unemployment among black Americans.

Henry also noted that Buttigieg has repeatedly been accused of racism toward African-Americans himself.

Henry asked: “Are you the right messenger to question the President on race when as mayor of South Bend, black leaders were quite critical of what you did, particularly in terms of police-involved shootings and other matters? Why are you questioning the President [and disregarding your own failures]?”

Klobuchar was annoyed that Buttigieg is promoting the laughable narrative that he’s the cool, new upstart who’s going to revolutionize Washington when in reality, he’s the obscure former mayor of a small town with a population of just 100,000.

Joe Biden echoed Klobuchar’s sentiments when he quipped: “He’s a mayor of a small city who has done some good things but has not demonstrated his ability.”

Meanwhile, here’s how President Trump is doing among black voters.