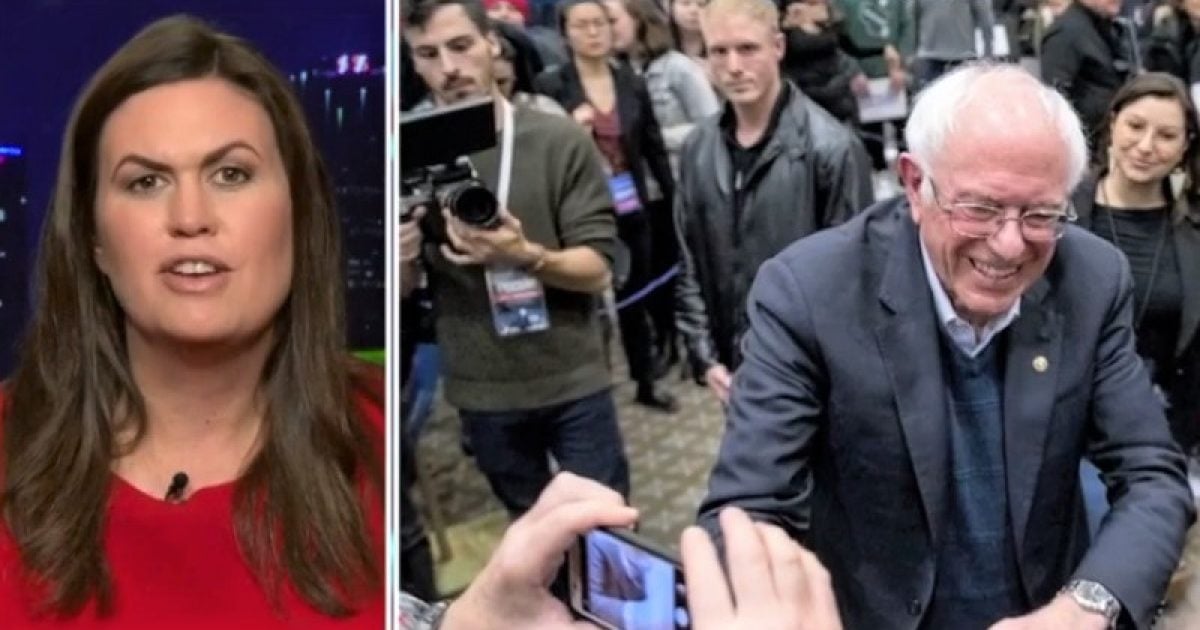 Sanders (no relation to Senator Sanders) said Bernie appears on track to win the Democratic presidential nomination — despite resistance from his own party — so Trump fans should not get complacent. Why? Because like President Trump, Bernie has a passionate base that is energized and determined to win.

“I think [Bernie Sanders] is looking like the presumptive Democrat nominee at this point. He’s certainly moving in that direction,” Sanders said on “Justice with Judge Jeanine.” “Republicans have to be extremely careful. We can take nothing for granted at this point. The stakes have literally never been higher.”

Sarah Sanders said having a socialist win the presidency would destroy the United States and undermine the American way of life.

“If crazy socialist Bernie Sanders is the Democrat nominee — as he is well on track to be — literally our way of life and our very freedom is at stake at the election in November,” Sarah said. “Republicans have to come out in full force and make sure that they get Donald Trump reelected.”

Sarah said she believes that Bernie has a very vocal and radical base, but it’s fairly small. However, because Senator Sanders has a strong grassroots campaign, he will be a tough opponent in November, despite his extremist views.

“Bernie has a small kind of coalition that I think has a low ceiling,” Sarah said. “I think it’s going to be hard for him to overcome that in a general election.

Whereas the President has expanded very far beyond his 2016 base, in large part because of his success. The economy is booming. Every demographic is doing better under this president and you’re going to see that change the makeup of the voters that come out and support him in November.”

Sarah Sanders joins a growing chorus of concerned voices from both sides of the political aisle who are alarmed by the radical left’s embrace of socialism. Over the weekend, Bernie raised eyebrows by praising murderous Cuban dictator Fidel Castro in a shocking “60 Minutes” interview.

Even Democrats like Judge Judy Sheindlin are warning against the destructive socialist “revolution” that Bernie Sanders and his supporters are promoting.

Judge Judy, who endorsed Mike Bloomberg for president, said there is no way that socialism will supplant capitalism in the United States as long as she’s alive.

Why? Because Judge Judy said she will fight socialist revolutionaries from the far-left “to the death.”

“America doesn’t need a revolution,” Judge Judy said. “It’s the most perfect country in the world. And those people that are trying to change it and ‘revolutionize’ it don’t have a chance. Because I’ll fight them to the death!”