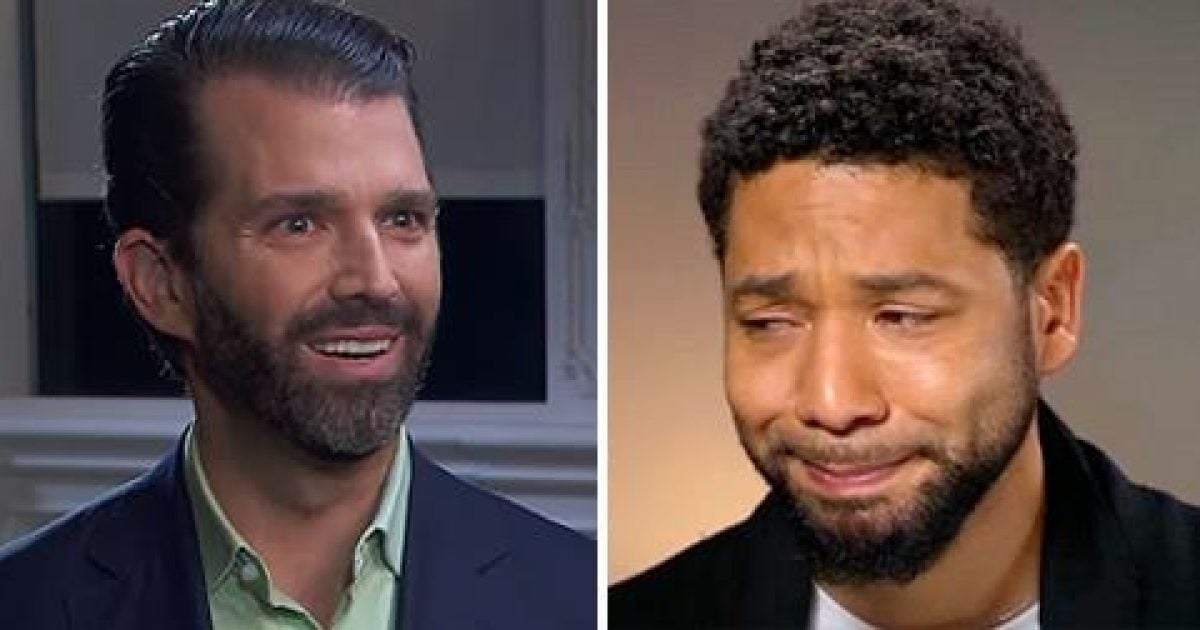 President Donald Trump’s son Donald Trump Jr. was among some of the first social media users to announce Tuesday that a suspect has finally been indicted for the horrific hate crime on Hollywood actor Jussie Smollett that occurred in January of 2019.

“It looks like they finally indicted the guy who attacked Jussie. #justiceforjussie,” he tweeted at 5:57 pm, about an hour after Chicago station WFLD broke the exciting news:

It looks like they finally indicted the guy who attacked Jussie. #justiceforjussie pic.twitter.com/ByadITxyGa

“[T]he grand jury’s investigation revealed that Jussie Smollett planned and participated in a staged hate crime attack, and thereafter made numerous false statements to Chicago Police Department officers on multiple occasions, reporting a heinous hate crime that he, in fact, knew had not occurred,” Webb revealed in a statement.

The special prosecutor cited “several factors,” including the exorbitant amount of money and resources wasted investigating Smollett’s original claim. Money and resources that he refused to reimburse, even after he was outed as a fraudster last year.

Dan Webb statement on Jussi… by V Saxena on Scribd

Webb’s announcement capped what has been a long and arduous search for justice that began in January of 2019, when Smollett, who’s gay and black, filed a sketchy police report claiming he’d been attacked outside his apartment building in Chicago by two MAGA-hat-wearing white men sometime around 2:00 am in the morning.

The men allegedly hurled racial and homophobic slurs at him, beat him, poured bleach all over him and hung a rope around his neck like a noose.

The alleged attack spawned a media firestorm, with Hollywood celebrities and establishment media reporters decrying the racism and homophobia.

But as evidence in the case began to surface, including the stunning fact that Smollett still had the rope around his neck when the authorities arrived at his home, and the even more telling fact that the two men who’d allegedly attacked him were Nigerian brothers who knew Smollett personally and had worked alongside him on the HBO series “Empire” (he’s no longer on the show), the actor’s story began to collapse.

Three months later, Cook County Judge Michael Toomin approved a request for a special prosecutor to reexamine the case “to restore the public’s confidence in the integrity of our criminal justice system.”

Two months later in August, Webb was assigned the job. And now, nearly a year after Smollett perpetrated a fake hate crime against himself, he’s finally being held accountable, though according to a statement from his attorney, he’s not pleased.

“This indictment raises serious questions about the integrity of the investigation that led to the renewed charges against Mr. Smollett, not the least of which is the use of the same CPD detectives who were part of the original investigation into the attack on Mr. Smollett to conduct the current investigation, despite Mr. Smollett’s pending civil claims against the City of Chicago and CPD officers for malicious prosecution,” the disgraced actor’s attorney said in a statement to station WFLD.

“One of the two witnesses who testified before the grand jury is the very same detective Mr. Smollett is currently suing for his role in the initial prosecution of him. After more than five months of investigation, the Office of the Special Prosecutor has not found any evidence of wrongdoing whatsoever related to the dismissal of the charges against Mr. Smollett. Rather, the charges were appropriately dismissed the first time because they were not supported by the evidence. The attempt to re-prosecute Mr. Smollett one year later on the eve of the Cook County State’s Attorney election is clearly all about politics not justice.”

In reality, prosecutors never “found any evidence” to substantiate Smollett’s claims that he’d been attacked. But they did discover a copious amount of evidence strongly suggesting that he’d undertaken a plot to perpetrate a fake hate crime so as to earn public attention and sympathy because he was upset over his “Empire” pay.

As of Wednesday morning, the public’s reaction to Smollett’s indictment appeared to be mostly positive, with many responding with joyful mockery:

Jussie Smollett might be going to jail soon! He has been indicted by a special Prosecutor in Chicago!

Hey @JussieSmollett don’t worry I will send you some Trump hats & Socks when you go to jail!

Faux Jussie indicted on 6 new counts. It’s okay Jussie, don’t beat yourself up over it.

He is set to appear in court February 24th

Feel good story of the day.

But for reasons that remain unclear, there were a few pockets of people who were upset by the indictment. Their reasons for concern were varied.

Interesting! He is indicted while Stone is going to be acquitted as well as his master POTUS. Is it the justice??

Yikes. 1) I wonder if this is the best use of Chicago’s resources. 2) I also wonder if Smollett should have apologized and repaid the costs of the investigation. Maybe this could have been avoided? Idk.

Leave the guy alone. This is overkill.

Let’s STOP #DanWebb from posturing and exploiting this case.