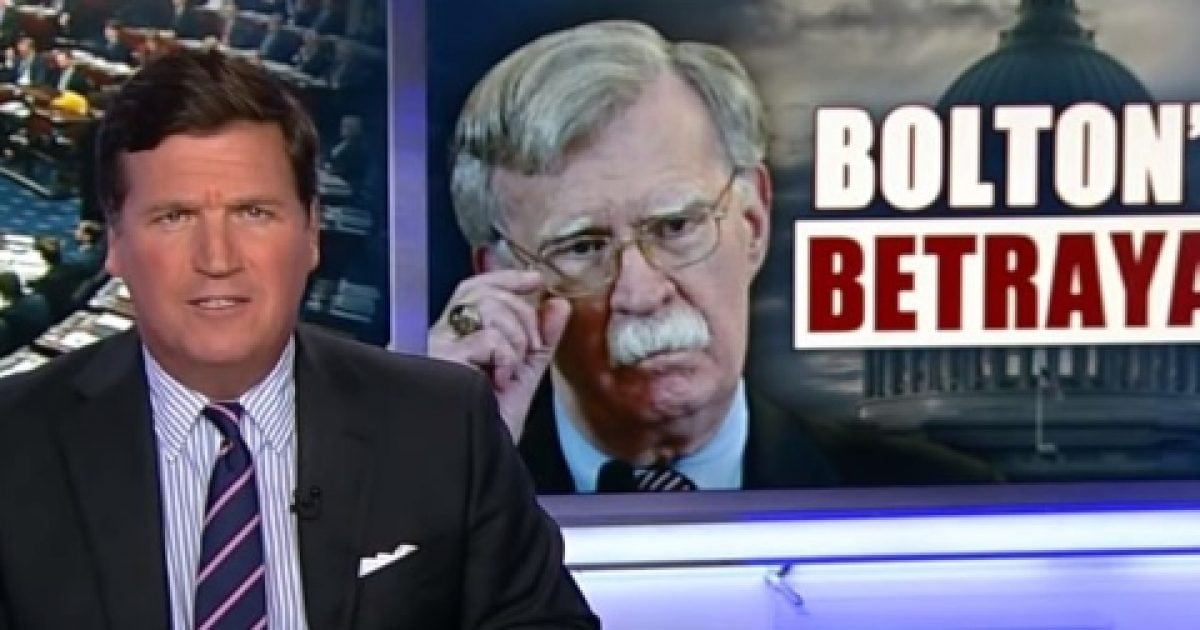 Fox News host Tucker Carlson thinks no one should be “shocked” by John Bolton’s behavior as the former national security adviser “has always been” like a snake.

“Republicans in Washington seem shocked to discover that Bolton has turned and betrayed his former boss, Donald Trump. But they shouldn’t be shocked,” Carlson, a longtime critic of Bolton’s, said on “Tucker Carlson Tonight” Monday.

Carlson blasted the former diplomat for being “obsessed” with war, noting that was his reason for joining the Trump administration even though he apparently disliked the president.

“Bolton genuinely, passionately loved war. In the end, of course, he didn’t get it,” Carlson went on. “Trump blocked him at the brink of more than one conflict. Bolton finally left amid well-deserved humiliation. Bolton’s resignation was one of the highlights of the president’s first term.”

He also called out the hypocrisy of the media and the sudden worship of Bolton when he left the Trump administration.

“The media were sad to see John Bolton go. They love wars. Wars mean they get to move tanks around on a screen and talk about weapons systems,” Carlson said. “And so suddenly, for the first time, they love John Bolton. What a hero he was.”

He brushed aside Bolton’s upcoming tell-all book and Trump’s impeachment trial as a “stupid sideshow.”

“Will John Bolton testify? Who knows? Either way, it won’t change the outcome. Trump will be acquitted. It’s a totally stupid sideshow. We’ll be embarrassed about it later,” Carlson concluded.  “How did a guy who disagrees so completely with everything Donald Trump ran on and won on — how did that guy wind up in a position of power in the White House? Good question. Because he’s not the only one.”

Over on Fox Business Network, Lou Dobbs also unloaded on the former national security adviser who was a Fox News contributor for 11 years, saying he has become a “tool” for Democrats.

“John Bolton himself has been reduced to a tool for the radical Dems and the Deep State with his allegation that the president once told him that the aid to the Ukraine was entirely dependent on whether or not Mr. Zelensky carried out investigations of his political opponents,” the host of “Lou Dobbs Tonight” said Monday.

“Bolton’s book agency, Javelin, has published books by disgruntled current and former government officials such as fired FBI director James Comey, an anonymous Trump administration official who wrote the book ‘A Warning’ and Cliff Sims, a former White House staffer who the president said broke a non-disclosure agreement to write a book bashing the White House,” he explained.

“Do you see the pattern here with Mr. Bolton?” Dobbs asked.

He targeted Bolton as a  “RINO” and showed his ties with Sen. Mitt Romney in a chart, pointing out how the Utah Republican is showing a willingness to have Bolton testify in the impeachment trial and how Bolton “served as Romney’s foreign policy adviser during Romney’s failed 2012 presidential run.”

“Mitt Romney’s call for John Bolton’s testimony comes as no surprise,” Dobbs said. “Romney has been, let’s say, wobbly throughout. He’s long had connections with foreign policy RINOs and they with him. Bolton one of them.”