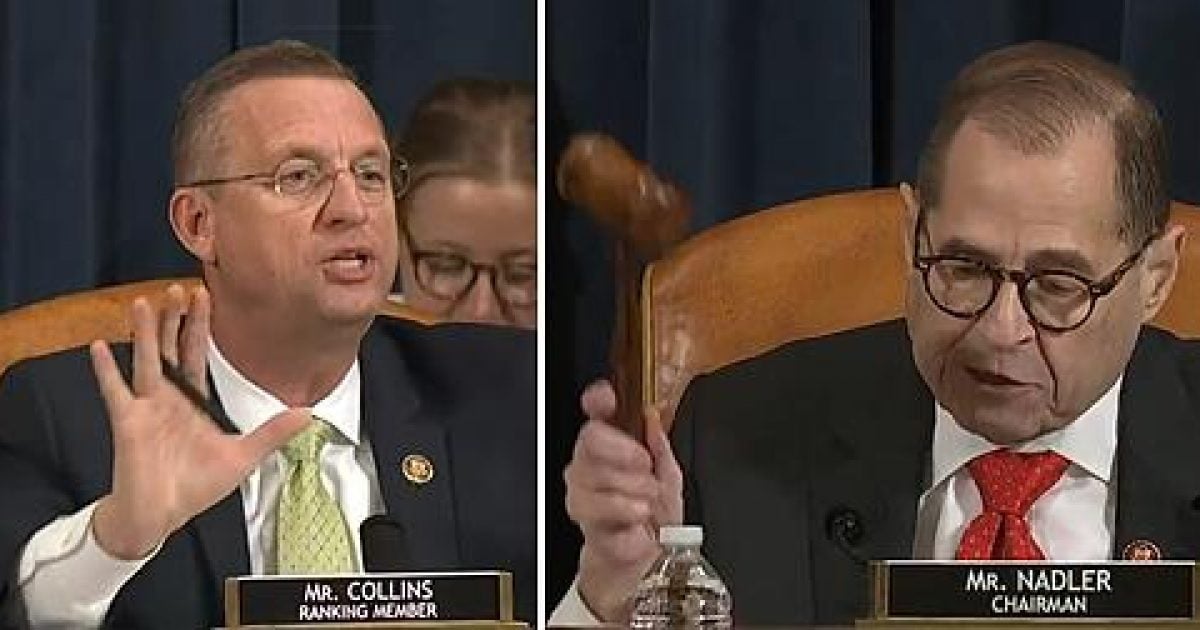 After forcing the House Judiciary Committee to endure hours of nearly nonstop debate regarding the impending impeachment of President Donald Trump, committee chair Jerry Nadler pulled a “bush league” fast one Thursday evening by gaveling the debate to an abrupt close and rescheduling the final vote for Friday morning.

“It is now very late at night. I want members on both sides of the aisle to think about what has happened over these last days and to search their consciences before we cast our final votes,” Nadler’s unexpected closing statement for the evening began.

“Therefore, the committee will now stand in recess until tomorrow morning at 10 am,” he continued, spurring shock and outrage from his Republican colleagues, “at which point I will move to divide the question so that each of us may have the opportunity to cast up-or-down votes on each of the articles of impeachment, and let history be our judge.”

Listen, and take note of the reaction from Republicans:

Within seconds of Nadler banging his gavel, ranking member Doug Collins spoke up in fury, blasting the committee chair for screwing up everybody’s schedule without even taking the time to consult his second in command.

“[Y]ou’ve just blown up schedules for everyone,” he said. “You chose not to consult the ranking member on a scheduling issue of this magnitude?! This is the kangaroo court that we’re talking about!”

“So typical. Unbelievable!” another Republican blurted out in frustration.

“It’s Stalinesque! Let’s have a dictator!” yet another Republican, this one easily identifiable by his voice as Rep. Louie Gohmert, added.

Speaking with reporters at an impromptu press conference shortly after the debate’s conclusion, Collins questioned Nadler’s integrity and accused him of purposefully rescheduling the final vote for Friday morning so that it receives more attention from the media and the public.

“So tonight, without consulting the ranking member, without consulting anyone, schedules of anybody — we’re scheduling this at 10 am in the morning,” Collins said. “The integrity level of this committee, the chairman’s integrity is gone, his staff is gone. This was the most bush-league I have seen forever!”

Bush-league is a slang term for, *cough*, bullschiff.

“And if the American people wondered about this impeachment anymore, they don’t have to wonder anymore,” the Republican lawmaker continued. “They saw what happened right here tonight. Because this committee is more concerned about getting on TV in the morning than it was finishing its job tonight and letting the members go home.”

He added that Nadler’s last-minute stunt merely provided more proof of what he’s been alleging all year long, which is that Democrats have been “rimshotting” the whole process in their quest to take down America’s duly elected president.

“They do not care about rules,” Collins maintained. “They have one thing — their hatred of Donald Trump — and this showed it tonight, because they want to shine in these cameras, get prettied up and then vote and make it all happen. I am just beyond words. It just shows their lack of integrity in this process and the lack of case that they have.”

One: Why Congress perpetually polls so poorly.

“They know it’s all about games. It’s all about the TV screens. They want the primetime hit. This is Speaker [Nancy] Pelosi and Adam Schiff and the others directing this committee. I don’t have a chairman anymore. I guess I need to just go straight to Ms. Pelosi and say, what TV hit does this committee need to do? This committee has lost all relevance.”

“But to not even consult the ranking member, to not even give us a heads up, this is all we heard, and we had been consulting back and forth in the last few minutes and how we were going to end the speaking tonight … that was the most lack of integrity thing I have ever seen by a member of Congress, especially a chairman.”

Judiciary Committee member and Freedom Caucus chair Andy Biggs responded to Nadler’s stunt with his own statement blasting the chair and his Democrat colleagues for their “long line of bad-faith, dishonest dealings.”

Chairman Jerry Nadler just pulled a fast one on House Judiciary Republicans. We were expecting to vote on Articles of Impeachment in Committee tonight before he recessed until tomorrow.

This is yet another of a long line of bad-faith, dishonest dealings by the Democrats. pic.twitter.com/wvPs4XE1rF

In a statement issued after the debate’s conclusion, committee member Rep. Madeleine Dean, a Democrat, reportedly confirmed that Nadler’s decision was indeed based on “getting on TV in the morning,” as Collins had put it.

“And what the chairman’s spirit was: we want to make sure we do this in the light of day. We don’t want to vote on such an important article, or articles, that matter to the American people [and] to this president, in the late of night,” she said.

Thanks for the exceedingly rare honesty …