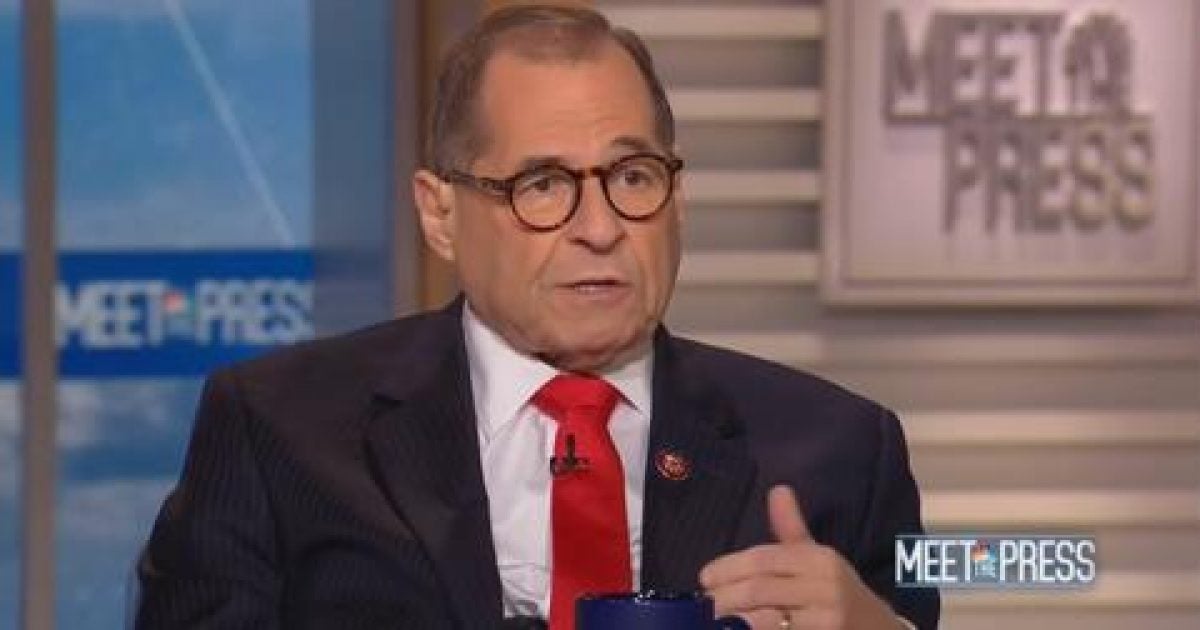 After three years of using trumped-up allegations of Russian collusion to try and stymie President Donald Trump’s agenda, it appears congressional Democrats are scheming to pull the same stunt again in case the president wins reelection next year.

It’s hard to draw any other conclusion given the recent rhetoric of the party’s top figures, including House Judiciary Committee chair Jerry Nadler.

Speaking Sunday morning on NBC’s “Meet the Press,” he accused the president of posing “a threat to our election” and suggested that, if ultimately acquitted by the Senate, Trump “will do everything he can to make it not make it a fair election.”

The underlying suggestion was that if Trump wins reelection, it’ll be via unfair/illicit means, meaning in effect that Nadler believes it’s impossible for the president to win the 2020 race fairly. Never mind that he won the 2016 race fairly.

“[Trump] poses a threat to the integrity of the next election if he’s allowed to continue to do what he’s doing,” he said. “This is a matter of urgency to deal with because we have to make sure the next election is conducted with integrity and without foreign interference.”

When asked by partisan MSNBC “journalist” Chuck Todd whether America will “have a fair election in 2020” if the president is acquitted, Nadler replied, “I don’t know. The president, based on his past performance, will do everything he can to make it not make it a fair election. That’s part of what gives us the urgency to proceed with impeachment.”

At the root of Nadler’s tenuous argument is the theory that the president misused the power of the presidency to try and persuade Ukrainian President Volodymyr Zelensky into investigating his top 2020 rival, former Vice President Joe Biden.

This theory forms the root of House Democrats’ impeachment efforts against the president, though the argument could be made that it’s been debunked.

Several “witnesses” — all of them called to testify by the Democrats — have admitted to being aware of nothing illicit. And the one witness who did suggest that something illicit may have occurred later admitted that this was just a factless presumption.

Ergo, the basis for the Democrats’ impeachment efforts and their rhetoric about election integrity is based arguably on a theory as unsubstantiated and dubious as the collusion delusion theory used to question the integrity of the 2016 election.

This revelation has led some to argue that all of this — from the collusion “witch hunt” to the Ukraine non-scandal — is just smoke and mirrors designed to tarnish the president’s image and, hopefully (according to the Democrats), prevent his reelection.

And what Nadler said Sunday seemed to only further cement this belief in stone. That and what his colleagues have also been saying.

Earlier this year Rep. Al Green said, “I’m concerned that if we don’t impeach this president, he will get re-elected.” And then this Saturday he suggested the president must be impeached as penance for slavery …

Keep in mind Democrats know full-well that despite their impeachment efforts, the president will never be convicted by the GOP-led Senate, meaning their efforts are for naught. Or are they?

To get an idea of what congressional Democrats might be thinking, one need only look at the demonstrably left-wing media.

Last week the Los Angeles Times ran a column arguing that impeachment won’t remove Trump from office but could lead to his defeat in 2020. So did The Guardian.

“The hearings do seem to have affected Democrats and independents, as well as many people who sat out the 2016 election. … Presumably anyone who now favors removing Trump from office will be inclined to vote against him next November. The House’s impeachment could therefore swing the 2020 election against him,” the latter piece reads.

Again, it seems like it’s all about stopping the president from winning reelection. But what’ll happen if he does indeed win? Judging by the rhetoric of Nadler and his colleagues, it seems likely Democrats will again cry foul — and again waste years perpetuating yet another “witch hunt” based on nothing but their conspiratorial musings.

In fact, they haven’t even given up on their original conspiracy theory yet.

“Members of the House Judiciary Committee and other more liberal-minded lawmakers and congressional aides have been privately discussing the possibility of drafting articles [of impeachment] that include obstruction of justice or other ‘high crimes’ they believe are clearly outlined in special counsel Robert S. Mueller III’s report — or allegations that Trump has used his office to benefit his bottom line,” The Washington Post reported last week.

This announcement has inspired the president’s reporters to ask, “Why would they be doing that?”

“Why re-elect Democrats when you know that this is what they are doing with their majority. Their case is not strong because first it was Russian Collusion, then it was obstruction, then it was Ukraine, now their pivoting back to Russia. Why would they be doing that?” Lisa Booth

Frankly, the answer to that question seems obvious …