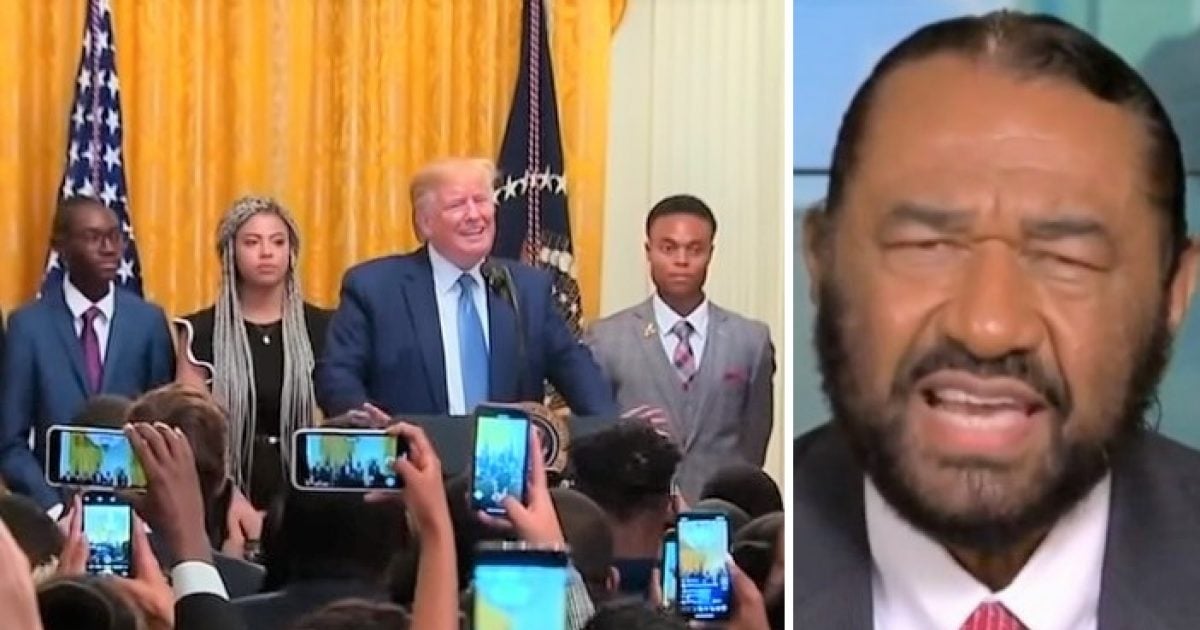 Democratic Congressman Al Green suggested that President Trump must be impeached as punishment for America’s “original sin” of slavery. Keep in mind that Republicans ended slavery in the United States in 1865. Donald Trump wasn’t born until 1946.

“I do believe that we have to deal with the original sin. We have to deal with slavery,” Green said. “Slavery was the thing that put all of what President Trump has done lately into motion. The president has played on racism and he’s used that as a weapon to galvanize a base of support, to mobilize people.”

MSNBC host Alex Witt was stunned into silence by Green’s incoherent rant on her show. Green spouted the bizarre tirade in response to a question about Democratic support for impeachment.

Reminder: Al Green has introduced articles of impeachment against Trump three times in the Democrat-led House of Representatives. They all failed miserably.

Green then lied when he claimed that President Trump had referenced “sh**hole countries” when he announced his candidacy in June 2016.

The MSNBC host did not push back on Green’s lie, even though the “sh**hole countries” controversy didn’t happen until January 2018. Green said:

“We cannot overlook what happened when he came down the escalator and just demeaned people of color when he talked about the sh**hole countries. He has found a way to use ugly words to his benefit and to the detriment of the people who are the object of his words.

Emily Dickinson said a word is dead when it is said. I say it just begins to live that day. His words take on life and meaning, and they hurt. And I know the people who are being hurt, and I came to Congress to represent them, and I cannot let it go.

So I appreciate whatever we will do, but until we deal with the issue of invidious discrimination as a relates to [the] LGBTQ community, the anti-Semitism, the racism, the Islamophobia, the transphobia, and also the misogyny that he has exemplified, I don’t think our work is done.”

Alex Witt started the interview by asking Al Green about the articles of impeachment he had previously introduced.

Witt said:  “I know that you introduced one of those first impeachment resolutions against Trump, and it actually lost 364-58. Are you concerned that Americans are having a waning interest as this process drags on?”

“Well, it was yesterday that we celebrated that we had something that was brought to the floor. Maybe I shouldn’t say ‘celebrated.’

We brought to the floor the articles for vote and we received 50-plus votes [the first time]. Then the second time, some 60 plus, and a third time, 95 votes.

I think that we’re moving forward in a very cautious and prudent way, but I also think that if we don’t include some of the things that are important to people of color, then I think that our business won’t be finished with.”

Basically, Al Green was making an oblique reference to slavery reparations. Democrats are trying to bribe black voters again by dusting off the old leftist talking point of promising reparations. Not surprisingly, the reparations talk has heated up as we draw closer to the November 2020 election.

However, black activists have warned black voters to not fall for the “Blame Whitey” hustle because it’s a scam to con them into voting for Democrats.

Activist Michael Meyers — a former board member of the ACLU — says after the elections are over, the Democrats will go back to ignoring black Americans until they need their votes again for the next election cycle.

“It’s more of that Blame Whitey movement mania,” Meyers said. “It’s sheer racial rhetoric. That’s what you get at the Al Sharpton so-called ‘House of Justice.’ You have buffoonery. You have diversion, you have distraction. You have this notion of farce…It is not to be taken seriously. I can’t understand how serious presidential contenders can give legitimacy to a racial blowhard [like Sharpton]. It is outrageous and silly idiocy.”