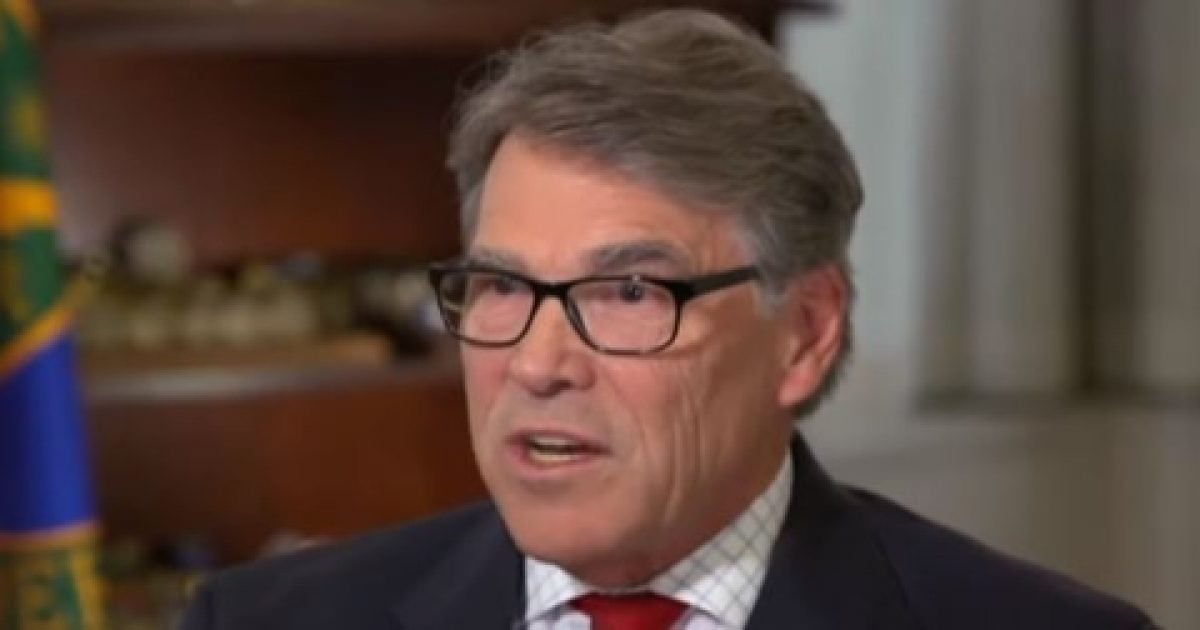 Secretary of Energy Rick Perry believes President Donald Trump is the “chosen one” who was “sent by God to do great things.”

Perry shared his perspective on the president and his mission during an interview with Fox News’ Ed Henry which was previewed in a clip shown on “Fox & Friends” over the weekend.

“And I actually gave the president a little one-pager on those Old Testament kings about a month ago and I shared it with him,” the former Republican Texas governor continued. “I said, ‘Mr. President, I know there are people that say you said you were the chosen one and I said, ‘You were.’ ”

“I said, ‘If you’re a believing Christian, you understand God’s plan for the people who rule and judge over us on this planet in our government,’ ” he said.

After airing the portion of the interview, Henry noted that Trump’s former GOP rival had also “pointed out to me he believes Barack Obama was sent by God as well, for that moment and that time.”

“He thinks at this moment and this time, Donald Trump was sent by God to do great things,” he added.

The president once referred to himself in similar terms, saying he was the “chosen one” when speaking about his trade war with China.

President Trump: “I am the chosen one.”

Trump later dismissed the criticism of his remarks by clarifying that he was being sarcastic.”

“You know exactly what I meant. It was sarcasm. It was joking, we were all smiling. And a question like that is just fake news,” he told reporters.

Pete Hegseth noted during the “Fox & Friends” clip that many of Trump’s supporters “feel precisely the same way” as Perry.

“They hear the attacks from the media about who he is and his background and they dismiss it and say, God has used imperfect people forever,” Hegseth said, adding that what the president “has withstood is unlike what really any other mortal could understand”

Earlier this year, Trump campaign manager Brad Parscale said of the president, “only God could deliver such a savior to our nation.”

Loved watching the crowd fill up for the 547th Rally in Green Bay. There has never been and probably never will be a movement like this again. Only God could deliver such a savior to our nation and only God could allow me to help. God bless America! pic.twitter.com/PBata3mB14

“I think God calls all of us to fill different roles at different times, and I think that he wanted Donald Trump to become president,” Sanders said. “And that’s why he’s there, and I think he has done a tremendous job in supporting a lot of the things that people of faith really care about.”

Secretary of State Mike Pompeo believed “it’s possible” that Trump was sent to protect the Jewish people from Iran’s aggression.

Perry’s remarks about Trump being chosen for this time was understandable to many Christians who see God in control of the universe, but others who misunderstand the concept simply recoiled at the very idea that God would allow, let alone choose, Trump to be president.

If @realDonaldTrump is in fact the “chosen one” and part of a “divine plan” as claimed by Rick Perry, I’m becoming atheist. Now.

I still can’t get over the idea that Rick Perry thinks Trump was Gods pick.

Political commentator Ana Navarro-Cardenas went so far as to slam supporters of the president as a “cult.”