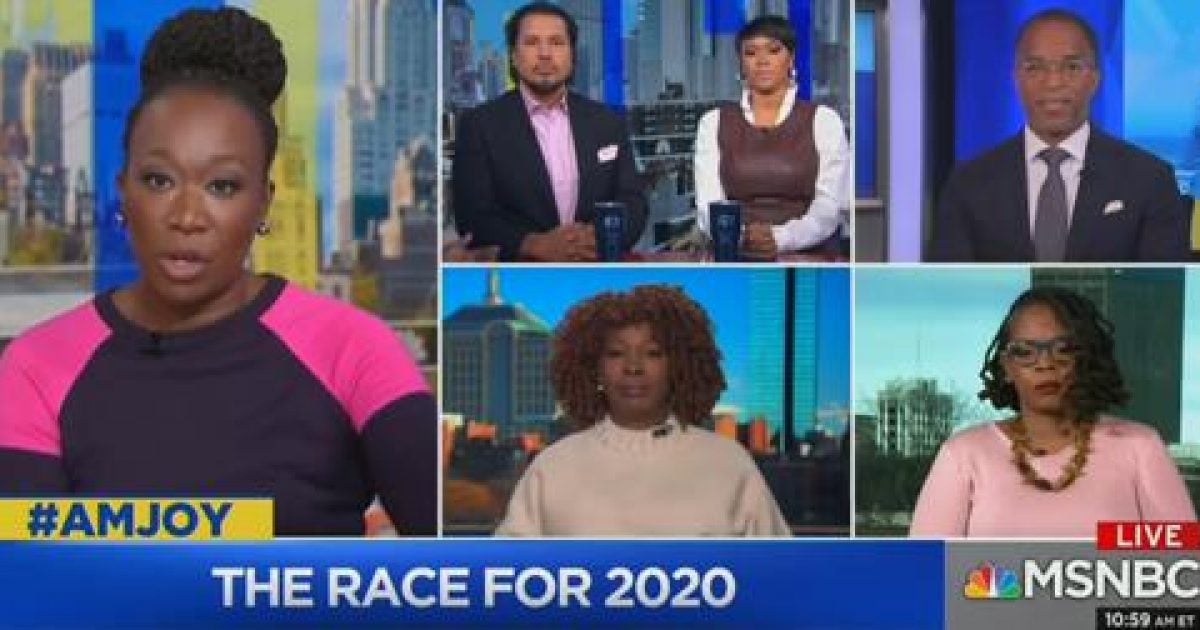 While the establishment media certainly deserve criticism for a variety of legitimate reasons, the one provided by an MSNBC contributor on Saturday seems to fall short.

According to contributor Jonathan Capehart, a columnist with The Washington Post, the establishment media deserve criticism for not fawning over failing Democrat presidential candidate Sen. Kamala Harris, whose campaign has been in a free fall since the summer. And the fact that Harris is black only makes them that much more guilty.

“I think part of the problem is the polls — the media chases whoever is leading in the polls,” he complained Saturday morning to conspiracy theory-peddling MSNBC host Joy Reid.

Not once has Harris ever led in the polls, though she did enjoy a brief rise in polling after the first Democrat presidential debate. But after her widely panned performances in the debates that followed, her polling numbers steadily began to decline.

During the brief ascendant portion of her campaign, however, the senator was admittedly treated like a “bright shiny object” by the media, Capehart lamented.

That’s an opinion, not a fact. A dubious opinion, at that, given polling data:

Capehart then continued by playing the race card — which is a common tactic employed by the hosts, contributors and guests of MSNBC — and arguing that the media has a responsibility to pay more attention to Harris solely because of her race.

Why? Because black people will soon be “the majority in this country.”

“[T]he press also has a responsibility, as the Democratic Party does, to look at the African-American community not just around election time but every time, every day … [W]e are becoming the majority in this country. The country is looking more and are more like us. So when will our stories, our views, the complexity and new nuances of our views be reflected?” he said.

In reality, black views, black history and black culture are already given prominence — sometimes unfairly so — throughout American society and its various institutions, including the media, academia, Hollywood, etc.

Just earlier this year The New York Times launched an entire project, the so-called 1619 Project, whose sole aim is to rewrite American history so that it favors the narratives preferred by racial grievance mongers such as Capehart versus the narratives rooted in truth.

“As part of its ambitious ‘1619’ inquiry into the legacy of slavery, The New York Times revives false 19th century revisionist history about the American founding,” Timothy Sandefur of the Goldwater Institute blunted noted when the project first launched.

Capehart’s disturbing and arguably black supremacist comments aside, there are plenty of legitimate reasons why Harris continues to falter in the Democrat primary.

Some of them are listed below (*Language warning):

@KamalaHarris, fire the candidate, not the campaign manager. Your results are based solely on your platform and your performance. You are to blame. Oh, wait! You’re a Democrat, so it is someone else’s fault.

NEWSFLASH! @KamalaHarris it is not your campaign mgr’s fault! You are double minded, you don’t stand for any 1 thing, so you change your mind a lot, fact is, voters don’t trust back/forth mind changing. In short, you never had the trust of the voters.

Kamala Harris, your egrigious record as DA and AG disqualify you from this race. Time to drop out. You’ve spent the bulk of your career covering up for criminal cops and jailing non-violent vulnerable people who were struggling in poverty.

Wow @KamalaHarris having the hypocrisy of saying she’s for black women when she enforced truancy laws that primarily impacted back and Latino mothers. Fuck her and her identity bait, she’s a piece shit cop and a sellout of the prison industrial complex. #KamalaHarrisIsACop #ACAB

@KamalaHarris has no platform other than virtue signaling and identity politics. Such an idiot to think these type of comments will get her into the WH.

Kamala Harris is polling at 3 Percent

You don’t have a chance against President @realDonaldTrump

DONT BLAME IT ON YOUR CAMPAIGN MANAGER KAMALA

To recap, her debate performances have been atrocious, she’s a two-faced flip-flopper, she has an egregious record as an overbearing prosecutor, she plays the identity card all the time, and she’s completely out of touch with the American people.