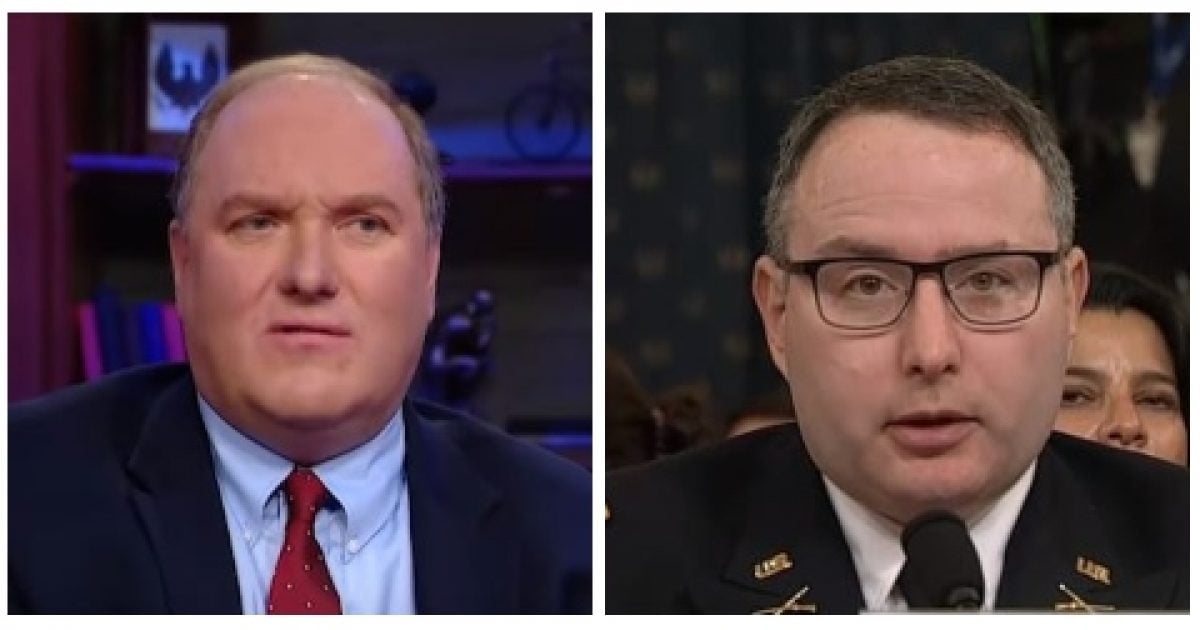 As the left attacked the work of the journalist, Solomon fired back this week, tearing up the White House’s former top Russia analyst, Fiona Hill, who questioned the veracity of his reporting on Ukraine corruption.  On Friday, Solomon targeted Army Lt. Col. Alexander Vindman who testified before Congress this week.

The veteran Washington, D.C., reporter, who worked as an opinion writer at The Hill until recently and is now a Fox News contributor, addressed Vindman’s testimony which included references to Solomon and his writing.

In a post published Friday about Vindman’s claims, Solomon noted that “under oath to Congress, he asserted all the factual elements in my columns at The Hill about Ukraine were false, except maybe my grammar.”

New York GOP Rep. Lee Zeldin pressed Vindman on his point, trying to clarify if “when you say key elements, are you referring to everything John Solomon stated or just some of it?”

“All the elements that I just laid out for you. The criticisms of corruption were false…,” Vindman had replied. “Were there more items in there, frankly, congressman? I don’t recall. I haven’t looked at the article in quite some time, but you know, his grammar might have been right.”

Solomon slammed Vindman’s testimony as “injurious to my reputation” and proceeded to lay out 28 “primary factual elements in my Ukraine column.”

Linking to sources and attributing where his information came from, Solomon went on to give details on his writings which have played a prominent role in the impeachment hearings even as Democrats have attempted to discredit them.

From the conflict of interest by former Vice President Joe Biden as his son Hunter was hired by the Ukrainian natural gas company, Burisma, which was under investigation for corruption, to the subsequent firing of Ukrainian Prosecutor General Viktor Shokin when he pushed to interview Hunter Biden as part of his investigation.

The senior Biden, serving as former President Obama’s vice president at the time, boasted in 2018 that he had gotten Shokin fired after threatening to withhold $1 billion in U.S. aid – and there is video to prove it.

Solomon concluded his post with an offer to Vindman directly, saying “if you have information that contradicts any of these 28 factual elements in my columns I ask that you make it publicly available. Your testimony did not.”

“If you don’t have evidence these 28 facts are wrong, I ask that you correct your testimony because any effort to call factually accurate reporting false only misleads America and chills the free debate our Constitutional framers so cherished to protect,” he wrote.

Solomon’s lengthy and detailed account backing up his work  – a must-read for anyone trying to understand the Ukraine mess – drew applause on social media where many Twitter users noted how his reporting is obviously scaring the left.

I don’t think he’ll respond. I agree with some here that he was coached &discrediting your reports was part of the scheme/coaching. I think most were coached to move in a certain direction. I only have a handful of people I trust with the facts and you’re at the top of the list.

Fight back. Sue for defamation. Don’t let it go, don’t be silent.

THIS is what journalism looks like.
Great job John.

Great work as always. You are a patriot

Wow, this list of facts has really helped me to understand the whole mess a lot better. Thanks for citing the sources and thank you for your incredible work.

This is the most significant article I’ve read during Trump’s time in Washington and probably long before that. John of course deserves the highest praise from both sides but sadly it’ll be one sided.

They hate it when facts get in the way of their narrative.

Wow! Nicely done, Mr. Solomon! How embarrassing for the US Military to keep LtC Vindman in a position he knows nothing about. Hoping his supervisor relieves him of duty! Good grief…and it was a joke, no country would want this guy as a Defense Minister.

Outstanding reporting, John. Have followed your investigative reporting on many topics for sometime. Thank you for your unbiased reporting. It’s what professional journalists are suppose to do.