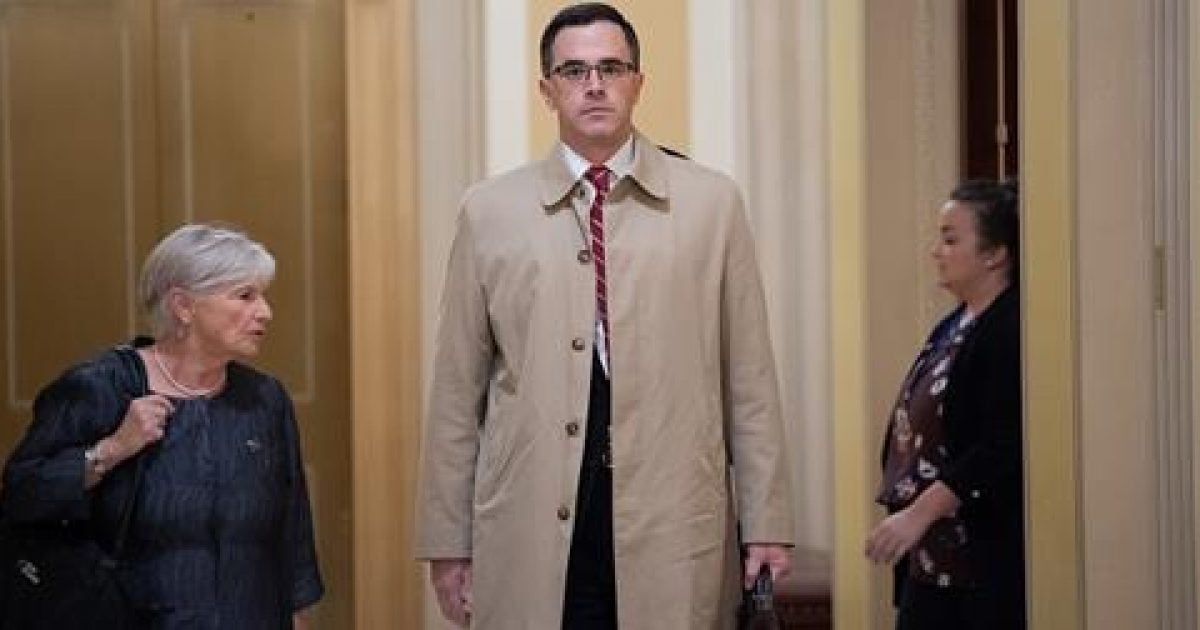 As of Saturday, Nov. 16, yet another name has been added to the growing list of top-level officials in the United States and Ukraine who have confirmed that President Donald Trump’s July 25th call with Ukrainian President Volodymyr Zelensky was on the up and up.

The latest confirmation came from Tim Morrison, the former the top U.S. presidential adviser on Russia and Europe on the White House National Security Council.

In testimony delivered during a closed-door congressional hearing last month, Morrison confirmed his belief that “nothing improper … occurred during the call.” Representative Mark Meadows described the Democrats’ demeanor during that testimony as “looking like they’re sucking lemons.”

-The transcript of the call is accurate
-He was concerned about leaks
-There was absolutely nothing improper or illegal on the call pic.twitter.com/13dpLfZMv4

While he didn’t utter those words himself, they were asked by congressional Republicans: “And in your view, there was nothing improper that occurred during the call?”

He later reiterated this sentiment in his own words when asked to clarify what about the call did concern him.

He then added, “I want to be clear: I was not concerned that anything illegal was discussed.”

It appears his only concerns centered around the possibility that the transcript would be leaked and the president’s political enemies — i .e., Democrats — would exploit it (and place America’s U.S.-Ukraine relationship at risk) for political purposes.

Sadly, it appears his concerns were warranted.

These and other revelations can be found in a transcript of his testimony that was finally released by House Intelligence Committee chair Adam Schiff on Saturday, a total of 16 days after he testified to Congress behind closed doors, and three days after the Democrats’ impeachment hearings officially went public.

View the entire transcript below:

Morrison joins a growing contingent of officials here and abroad, including the Ukrainian president, who’ve said that nothing about the call was improper — only to have their assertions ignored by congressional Democrats hellbent on impeaching Trump.

“There was no blackmail. It wasn’t a subject of our talk,” Zelensky said to reporters as recently as last month when asked about the Democrats’ claims.

Namely, the claims that the president had used a quid pro quo offer to blackmail his U.K. counterpart into launching an investigation into credible allegations of corruption surrounding both the 2016 U.S. presidential election and former Vice President Joe Biden.

What Zelensky said last month was just a reiteration of what he’d said when the whistleblower scandal first erupted in September.

“I have never seen a direct link between investigations and security assistance. Yes, investigations were mentioned, you know, in a presidential conversation. But there was no clear connection between these events,” he reportedly said.

The sound you hear is the entire Democrat impeachment narrative collapsing.

Ukraine foreign minister: “I have never seen a direct link between investigations and security assistance.”

In other words, everything Dems are yelping about … never happened.https://t.co/FZztRi4Aqz

Following the transcript’s release, both congressional Democrats and Republicans released their own separate “key points” documents.

Naturally, the left-wing media reportedly rushed to highlight the Democrats’ “key points” while ignoring or downplaying those brought up by Republicans.

Those points broached by Republicans included the fact that, according to Morrison, the transcript of the July 25 call was “accurate and complete.”

This fact stands in stark contrast to claims by left-wing media “journalists” that the transcript “was not a complete transcript” and that there were “still things that are missing from it,” as falsely claimed last week by CBS’s Norah O’Donnell.

“Mr. Morrison confirmed that President Trump generally does not like foreign aid generally, and specifically held concerns that corruption in Ukraine may cause U.S. aid to be ‘misused,'” the GOP’s “key notes” read.

Furthermore, Morrison admitted in his own words that the president believes “Ukraine has a significant corruption problem” and feels the “Ukrainians are not paying their fair share.”

This testimony fits with the president’s known pattern of complaining about other nations, particularly those in Europe, not paying their fair share:

Great meeting w/ NATO Sec. Gen. We agreed on the importance of getting countries to pay their fair share & focus on the threat of terrorism. pic.twitter.com/e3ACOOOb0y

Europe has to pay their fair share for Military Protection. The European Union, for many years, has taken advantage of us on Trade, and then they don’t live up to their Military commitment through NATO. Things must change fast!

These and other revelations contained within the transcript released on Saturday all seem to suggest that the Democrats’ latest attempt to dethrone the president is as fraudulent as their first attempt turned out to be.

Check out the GOP’s “key points” below:

And out of fairness, feel free to check out the Democrats’ “key points” as well:

Or if you seek a summary of the Democrats’ “key points,” simply check out ABC, CBS, CNN, NBC, MSNBC, The New York Times, The Washington Post, or any other allegedly objective mainstream media news network …