A young fan pulled the ultimate troll move on the NBA at a game this week between the Lakers and the Clippers. 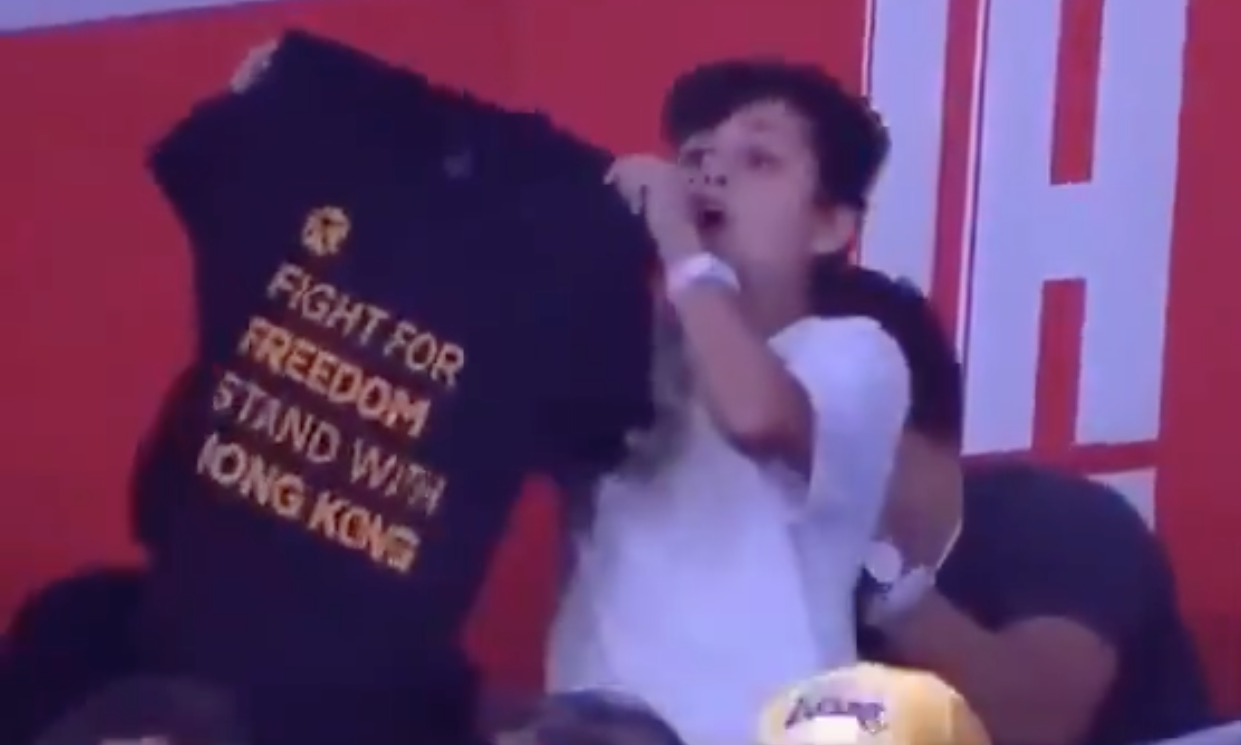 As the dance cam moved through the stadium, a young fan waving a Clippers shirt caught the eye of the cameraman. Once it was clear that the focus was on the boy, he reached legendary status by dropping the cover Clippers shirt and revealing a pro-Hong Kong message, which promptly ended his “15-seconds” of fun.

“Fight for Freedom, Stand with Hong Kong,” the shirt read. The cameraman moved the camera as quickly as possible, keeping with the league’s assertive effort to stay away from allowing anyone to express any views that may paint communist China in a bad light.

Check out the hilarious video below:

the best clip to start the NBA season is this kid baiting the broadcast into flashing a “Fight for freedom stand with Hong Kong” sign on TV and then the cameraman pans away pic.twitter.com/B30ubY63CX

The shirt referenced a tweet from Houston Rockets General Manager Daryl Morey earlier this month, which ultimately kicked off controversy regarding China’s heavy influence within the league. Morey found little-to-no support for his pro-Hong Kong message as some NBA brass and athletes defended China.

NBA star LeBron James received heated backlash after public statements that seemed to be in support of the communist nation and its efforts to shut down pro-freedom protestors.

The shirt used by the young fan was reportedly one of the thousands handed out for free hours before the game:

These T-shirts, approximately 13,000 of them, were printed and hauled out to downtown L.A. in a moving van and are currently being handed out on the streets surrounding Staples Center for free, hours before Lakers-Clippers tips off pic.twitter.com/snbGdd5zSG

The NBA may have a level of control over their own players, but people have flooded social media with messages of support for the young fan who pulled a fast one on the league:

You can feel the fear in the camera person as they try to get away as fast as possible after falling for the decoy shirt! ? pic.twitter.com/OcmwzfM0DQ

CLASSIC! Here’s the kid tricking the Dance Cam at an NBA game to show off his “Free Hong Kong” shirt pic.twitter.com/dZPJhRisaF

Another fan attending a Philadelphia 76ers preseason game reportedly held up a pro-Hong Kong sign and was ejected from the game earlier this month.

Current players in the league like LeBron James may not have spine enough to speak up, but legendary player Shaquille O’Neal recently expressed support for Morey.

“As American people, we do a lot of business in China,” O’Neal said this month on TNT. “They know and understand our values, and we understand their values. One of our best values in America is free speech. We’re allowed to say what we want and we’re allowed to speak up on injustices.”

“Daryl Morey was right. Whenever you see something going on wrong anywhere in the world, you should have the right to say, ‘That’s not right.’ And that’s what he did,” he added.