Texas police officer fatally shoots woman inside her own home

A woman was shot through a bedroom window by a responding police officer after a concerned neighbor called authorities to do a welfare check at the woman’s home very early in the morning on Saturday. The community is outraged.

The suspicious neighbor had noticed Atatiana Koquice Jefferson’s front door was open, with just a closed screen door and lights were on at about 2:25 a.m.

As captured by his bodycam footage, an unidentified responding officer in Ft. Worth, Texas, was quietly investigating outside Jefferson’s home when he spotted Jefferson at a window in a darkened room, and quickly drew his firearm. He yelled, “Put your hands up. Show me your hands!” A split second later, he fired.

Jefferson, who was black, died at the scene in her home. The officer who fired the shots is white.

According to the Fort Worth Star-Telegram, James Smith, the neighbor who called in his concern for the woman, said he knew Jefferson was home with her eight-year-old nephew. He called a non-emergency police department number.

The newspaper reported that, according to her relatives’ attorney S. Lee Merritt, Jefferson was playing video games with her nephew. They heard what they thought was a prowler and she went to the window to see what was going on before she was fatally shot.

“Perceiving a threat, the officer drew his duty weapon and fired one shot striking the person inside the residence,” the department said in a news release. “Officers entered the residence locating the individual and a firearm and began providing emergency medical care.”

Police released images of the gun they said that was found in a bedroom, though they did not indicate whether it was found near the victim’s body.

The Fort Worth PD released the following statement: 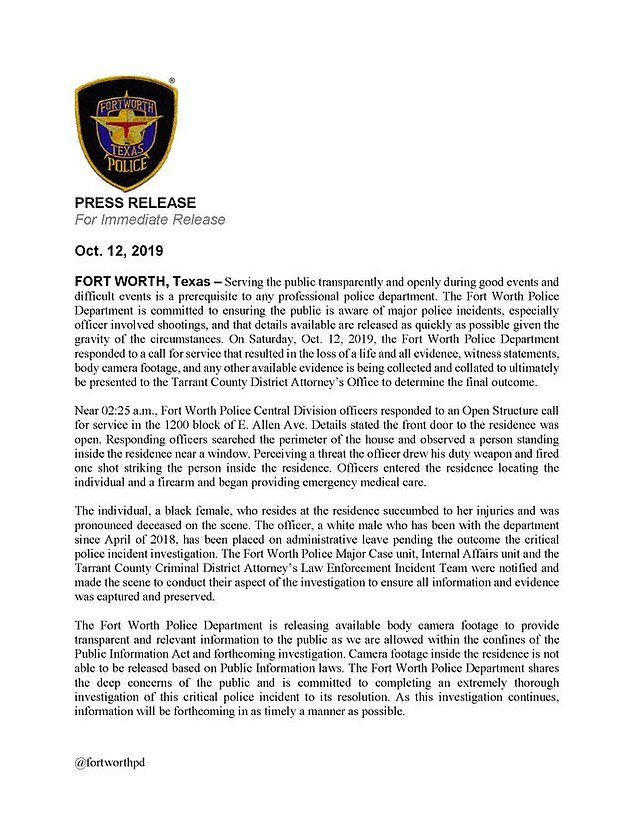 Merritt, an attorney who specializes in civil rights cases, posted an image of Jefferson and her nephew, along with a description of “Tay.”

According to the Star-Telegram, later in the day, black community leaders and clergy gathered in a chapel to call for action and accountability. The paper stated the shooting is the seventh of a civilian by a Fort Worth cop since June 1. Six of the seven died.

The Rev. Michael Bell, of Greater Saint Stephen, said the shooting evokes the killing of Botham Jean, the black 26-year-old man who was killed in his apartment by Amber Guyger, a white Dallas police officer who entered his apartment last year thinking it was her own.

Guyger was found guilty of murder Oct. 2 and sentenced to 10 years in prison.

Bell said he wants people to call the shooting in Fort Worth what it is — murder — and to see the officer who fired the shot held accountable. He also said Mayor Betsy Price and Police Chief Ed Kraus need to address systemic racism within the police department.