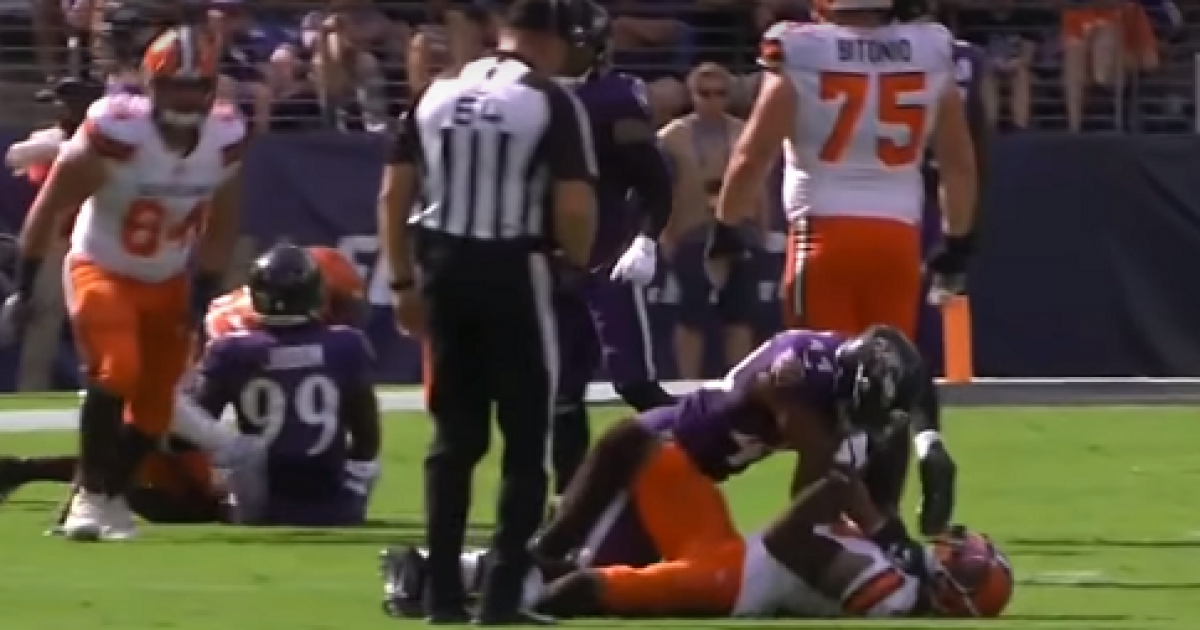 NFL receiver Odell Beckham Jr. is known for his combative nature on the field and the Cleveland Browns player lived up to that reputation Sunday in a high scoring game against the divisional rival Baltimore Ravens.

Late in the third quarter, Beckham threw a punch at Ravens defensive back Marlon Humphrey, who countered by throwing the receiver to the ground and putting both hands around his neck once on the ground.

This style of play is certain not meet the approval of NFL commissioner Roger Goodell, who has struggled with public perception of the league after opting to stand with radical players disrespecting the national anthem, embracing their liberal causes as the league’s causes.

Making matters worse, neither player was ejected from the game. The officiating crew reported called offsetting personal fouls on Beckham and Humphrey — in effect, a call that results in a replay of the down, as if the incident never happened.

A longer clip of the incident can be seen below:

Browns head coach Freddie Kitchens defended his player, telling ESPN that he was going to be on the phone with the league.

“I saw what you saw,” he told ESPN. “He was getting choked on the ground. They get away with that because it’s Odell. I’m going to be on the phone with Al (Riveron, NFL senior vice president of officiating) when I get on the bus.”

Humphrey told reporters he apologized to Beckham for his actions after the game.

“I ran into him after the game and apologized,” he said. “It’s not really the brand of football I want to represent. The whistle blowed. It has to be over with.”

"I ran into him after the game and apologized, it's not really the brand of football I really want to represent."

When asked if Beckham apologized, Hensley said that the receiver should have been ejected for throwing the punch that initiated the scuffle, according to ESPN reporter Jamison Hensley.

“I don’t think he did. But I definitely told the refs he should’ve been ejected. It is what it is. Emotions flare.”

Did Odell Beckham apologize to Humphrey for throwing a punch: “I don’t think he did. But I definitely told the refs he should’ve been ejected. It is what it is. Emotions flare.”

The Ravens have had a stellar reputation as top defensive team in the NFL, but after losing several key veterans on that side of the ball, their image is taking a beating this season.

So it’s understandable that Baltimore was frustrated on Sunday, losing 40-25.

At the same time, the Browns put up 530 yards of offensive on the day and Beckham, who fancies himself a top receiver in the game, accounted for just 20 yards on the day, on two catches.

Dismal numbers for a player of his stature, who lives and dies on the stat line.

Held to a career-low performance, Beckham’s only regret appeared to be that he lost an earring in the scuffle.

“It’s hot out there, we’re just competing,” he reportedly said. “I’m just upset that I lost my earring.”

Beckham: “I’m just upset that I lost my earring.”