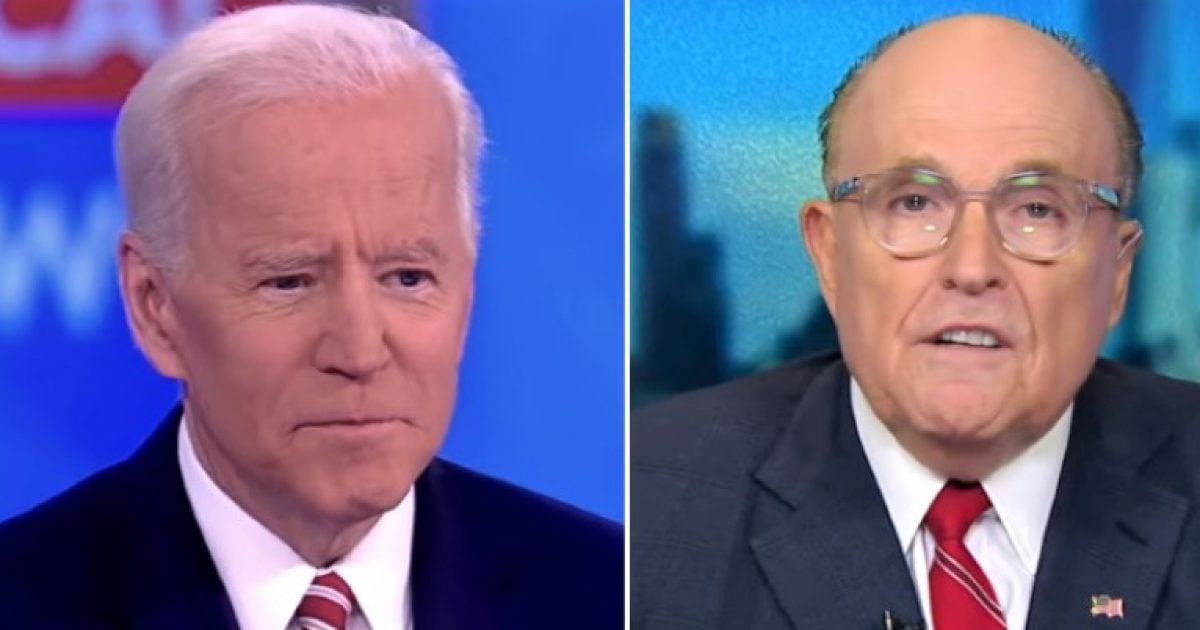 Trump attorney Rudy Giuliani fired back at Democratic presidential candidate Joe Biden for trying to silence him because he’s spotlighting Biden’s alleged abuse of power toward Ukraine when he was vice president.

Giuliani tweeted a letter from the Biden campaign to various mainstream media, urging them to not book Giuliani on any cable news programs.

Giuliani wrote: “The Bidens are clearly rattled by the affidavit showing there is a named accuser and not an anonymous source who is ready to testify! They have their Dem media trying to destroy my reputation and silence me!”

The Bidens are clearly rattled by the affidavit showing there is a named accuser and not an anonymous source, who is ready to testify! Reminds me of the reaction to the corrupt pols of the 70’s and 80’s. They have their Dem media trying to destroy my reputation and silence me! pic.twitter.com/xQ2isIPzos

Giuliani then torched “the Biden arrogance and entitlement to protection,” saying “they believe they own the media.”

Giuliani, a former federal prosecutor, added: “They know I have incriminating facts — not hearsay — because they know what they did in selling Joe’s office to a Ukrainian crook.”

In their bizarre letters to NBC News, CBS News, Fox News and CNN, Biden’s campaign expressed “grave concern that you continue to book Rudy Giuliani on your air to spread false, debunked conspiracy theories on behalf of Donald Trump.”

Joe Biden was upset because Giuliani made the rounds on the Sunday political talk shows, pointing out that Biden had threatened to withhold $1 billion in U.S. loan guarantees if Ukraine didn’t fire its top prosecutor, who was investigating Burisma Holdings.

At the time, Joe’s son Hunter Biden was on Burisma’s board of directors. Under pressure from the US vice president, that prosecutor (Viktor Shokin) was fired.

On ABC News, Giuliani showed an affidavit signed by Shokin that he claims confirms Hunter Biden was being investigated when Shokin was fired.

“I have an affidavit here that’s been online for six months that nobody bothered to read from the gentleman who was fired, Viktor Shokin, the so-called corrupt prosecutor,” Giuliani said. “The Biden people say that he wasn’t investigating Hunter Biden at the time. But [Shokin] says under oath that he was.”

Giuliani added: “I have another affidavit — this time from another Ukrainian prosecutor — who says that the day after Biden strong-armed the president to remove Shokin, lawyers for Hunter Biden showed up in the prosecutor’s office and they give an apology for dissemination of false information.”

As BizPac Review reported, in 2014, Hunter Biden was on the board of directors of Burisma Holdings, an energy company owned by a Ukrainian oligarch.

Hunter was appointed to that board and raked in $50,000 a month for the part-time gig despite having no background in energy. Critics say Hunter was merely given that cushy post to influence to his father, who was the U.S. vice president.

As vice president, Biden bragged about threatening and pressuring Ukraine to fire its top prosecutor. See the incriminating video below:

While the media gloss over Biden’s abuse of power, they’re demanding that Trump be impeached over a complaint filed by an anonymous “whistleblower” who claims Trump had pressured Ukrainian president Volodymyr Zelensky (during a phone call) to investigate Biden’s alleged corruption.

The media are gleefully pushing that narrative even though the anonymous whistleblower based his complaint on hearsay.

“A BIG thank you to Speaker Nancy Pelosi and the Democrats!” Eric gushed. “Keep it going — you and the Dems are handing Donald Trump the win in 2020!”