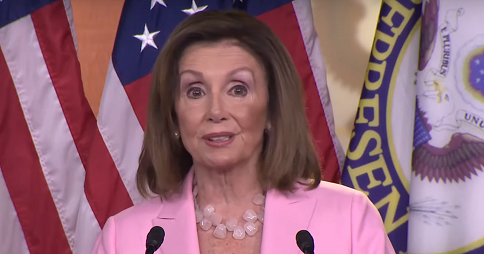 Back from recess, House Speaker Nancy Pelosi was as spry as a spring chicken — at least, she tried to look the part.

Not only that, the California Democrat let slip that she will be running for office again in the 2020 election, which would make her the oldest speaker ever, assuming that her party maintain’s control of the House.

Pelosi turns 80 in six months and has been in Congress over 32 years.

And she told C-SPAN’s Steve Scully that she will file for a 17th term, the Washington Examiner reported.

“Oh, yeah, well I’m not making any political plans right now, but we’ll just take it one day at a time,” she said initially.

The oldest speaker was Rep. Sam Rayburn, D-Texas, who died in office in 1961. less than two months before he turned 80, the newspaper noted.

It seems apparent Pelosi has some work done on her face during the summer break, which did not escape the notice of social media users commenting on her weekly press conference.

Whoever did her face lift, needs to be applauded or sued. ?
pic.twitter.com/R2WwFulAC1

Spry or not, Pelosi got a little crotchety at the press conference when reporters kept asking her about whether the House is conducting a formal impeachment inquiry.

“I’m not answering any more questions about a possible inquiry, investigation, and the rest,” she said, rather tersely.

The speaker eventually cut the press conference short out of frustration and walked away from the podium.

The questions were prompted by the House Judiciary Committee voting this week to establish formal rules for pursuing an impeachment inquiry, with Rep. Jerry Nadler, D-N.Y., chairman of the committee, declaring that a full vote by the House was not needed to authorize one.

As for Pelosi, social media users had a tough time getting past those eyebrows, with one suggesting if they “go any farther north … they’ll be in Canada.”

If those eyebrows go any farther north … they’ll be in Canada. Oh look she even has her own personal emoji ?#PelosiFacelift pic.twitter.com/ZyuqsxJboB

Nancy PELOSI had a face lift over her summer break. OD’ on Botox her eyebrows are at her hair line!

Probably raise some hackles, but did Nancy Pelosi get a facelift, a botox treatment, a haircut or all of the above? Appears strangely like the Speaker of the House is fitting out for Junior Prom Queen.

Pelosi must have had another face lift.
Soon her bellybutton will be on her chin.

Nancy Pelosi looks like she’s in a constant state of surprise. If she keeps having face lifts every election year her eyebrows are going to be a part of her hairline.

Her face gets freakier by the minute… pic.twitter.com/NMKPDslgh1

She can’t even age gracefully