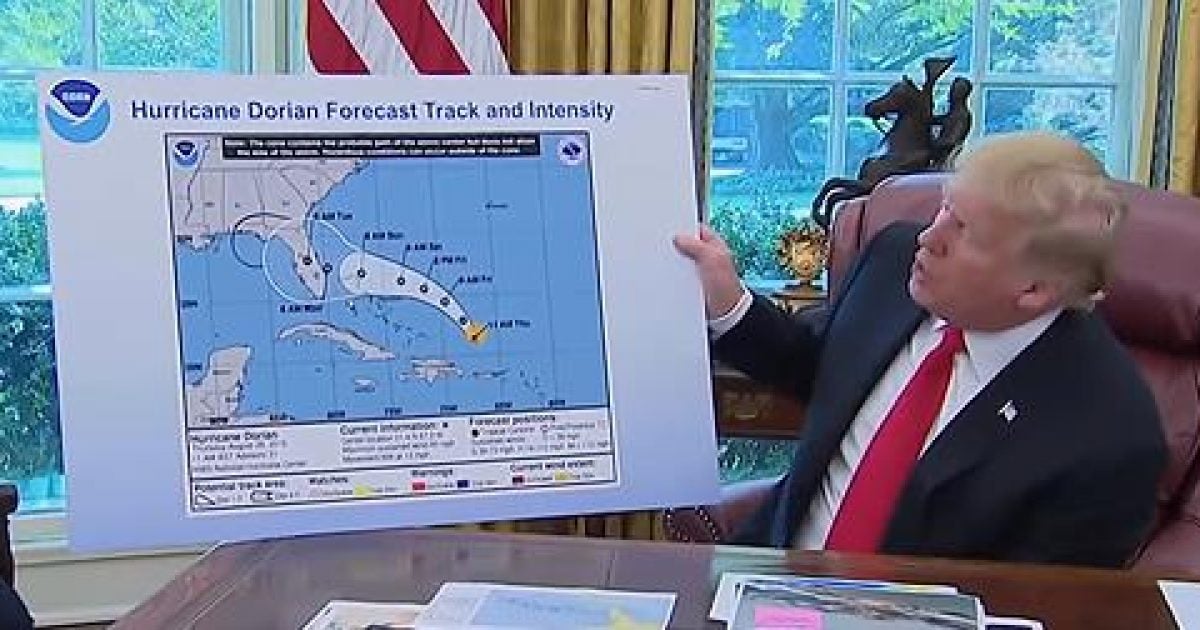 On Wednesday, President Donald Trump held an Oval Office briefing on Hurricane Dorian. During the briefing, he displayed what appeared to be a doctored National Oceanic & Atmospheric Administration map of the hurricane’s original trajectory.

The doctored map contained a thin black semicircle around the bottom of Alabama. The problem is that this semicircle wasn’t included in the NOAA’s original map. So why was the circle there, who drew it and what did they use to draw it?

While these questions likely don’t matter to average, everyday Americans — who are presumably busy worrying over whether Democrats will confiscate their guns and trying to evade elderly cat burglars — the media have made these questions the alpha and omega of their existence.

Watch a clip from the briefing below, and take note of the black semicircle:

As of Thursday morning, there were dozens upon dozens of stories from media outlets across the entire globe speculating that the president had doctored the map himself via a Sharpie. Except that Trump had already denied these allegations during another briefing Wednesday.

“You showed us a map earlier of the initial forecast and it appeared to have been extended or something to include Alabama. Can you explain how that came to be?” one reporter had asked.

“No, I just know that Alabama was in the original forecast,” the president had replied.

“That map that you showed today looked like it almost had like a sharpie …,” the reporter had continued.

REPORTER: That map you showed us today, it looked like it almost had like a Sharpie on it.

Some might be tempted to emulate former Secretary of State Hillary Clinton and ask, “What difference does it make?” Especially since Dorian had already passed America’s southeasternmost coast and was, as of Thursday morning, sidling up the South Carolina and North Carolina coasts.

Nevertheless, the media, who as a reminder spent years speculating over a since-debunked Russian collusion delusion conspiracy theory, just had to know the answer. And so as is typical of any obsessed sleuths, they’ve begun trotting out evidence.

Exhibit A: There was a Sharpie sitting right on the president’s desk Wednesday.

A “sharp”-eyed photographer captured this sitting on his desk today: A personalized Sharpie! #cannomakethisstuffup pic.twitter.com/ejwBiCWVyb

Exhibit B: The president has repeatedly expressed his love of sharpies.

“We know the president has an affinity for the Sharpie marker,” MSNBC’s Ari Melber noted during a bout of hard-hitting journalism early Wednesday evening. “He uses them to sign official government documents. He uses them for notes before he speaks publicly and he uses them even to write thickly-worded, angry notes to reporters and columnists even underlining the words.”

Exhibit C: The president has been claiming Dorian would hit Alabama.

“In addition to Florida – South Carolina, North Carolina, Georgia, and Alabama, will most likely be hit (much) harder than anticipated,” he initially tweeted Sunday morning.

He doubled down Monday after criticism began to rain in on him.

Such a phony hurricane report by lightweight reporter @jonkarl of @ABCWorldNews. I suggested yesterday at FEMA that, along with Florida, Georgia, South Carolina and North Carolina, even Alabama could possibly come into play, which WAS true. They made a big deal about this…

….when in fact, under certain original scenarios, it was in fact correct that Alabama could have received some “hurt.” Always good to be prepared! But the Fake News is only interested in demeaning and belittling. Didn’t play my whole sentence or statement. Bad people!

Exhibit D: He’s doubled down on his claim.

Early Wednesday evening, hours after the briefing in the Oval Office, Trump tweeted another map of Hurricane Dorian’s original trajectory. The map clearly showed that Alabama was a possible target.

“This was the originally projected path of the Hurricane in its early stages,” he wrote as the photo’s capture. “As you can see, almost all models predicted it to go through Florida also hitting Georgia and Alabama. I accept the Fake News apologies!”

Hilariously enough, the photo triggered yet another round of what’s now being called #SharpieGate, with left-wingers using admittedly funny memes to suggest that perhaps some of the lines in this map had been drawn in by the president as well.

Also, while we’re at it…
Apologies for this too, lamestream media?? pic.twitter.com/lIcrlR3GvW

While some of those memes were admittedly funny — luckily for liberal Democrats, conservatives Republicans tend to have a great sense of humor — it still remains unclear what difference any of this ultimately makes.