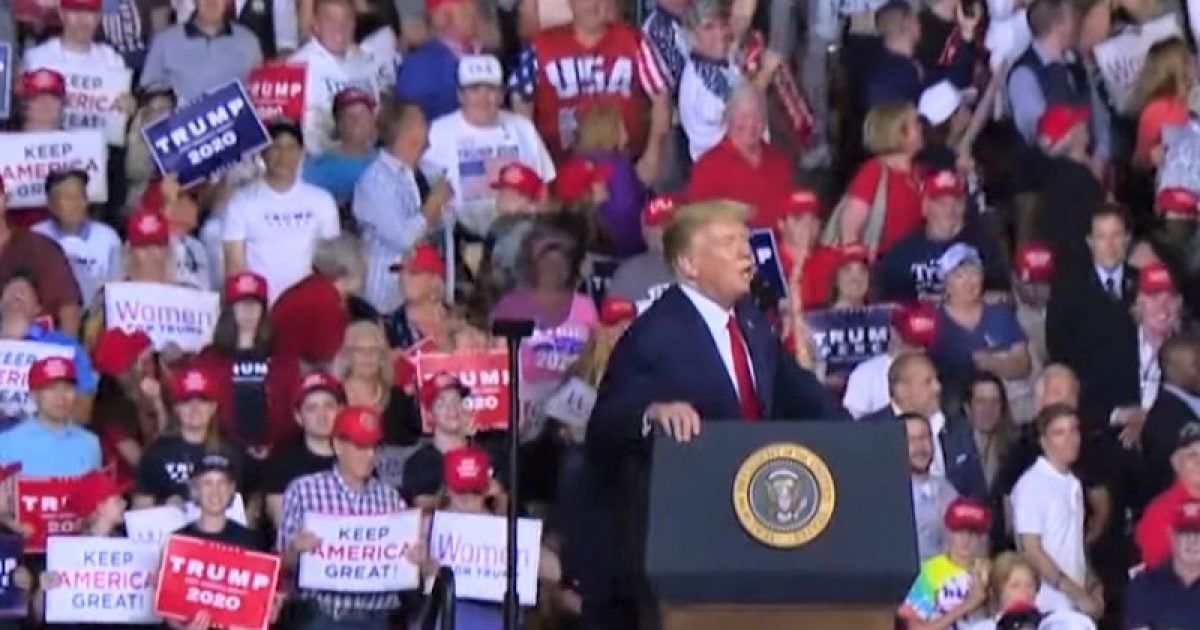 Triggered leftists unironically fat-shamed President Donald Trump after accusing him of fat-shaming a protester at a rally in Manchester, New Hampshire.

About 30 minutes into the rally, a protester (who was not seen on camera) interrupted Trump’s speech and caused a commotion. While security guards removed the protester, President Trump mocked his weight, suggesting the man was out of shape.

Some 11,000 people were in the capacity crowd at the arena. Many booed as the protester was tossed out of the venue off-camera.

Not surprisingly, leftists immediately trashed Trump, saying he’s the one with the weight problem. So let the hypocrisy sink in: Anti-Trumpers fat-shamed the president because they got upset that he fat-shamed a protester.

One Twitter user falsely claimed that Trump is probably “THE most overweight president of all time.”

Considering the medical standards of any given time. He is more than likely THE most overweight president of all time.

Another person snarked: “Apparently, Donald Trump has failed to see himself in the mirror.”

To the extreme narcissist the only thing they see when they look in the mirror is an adonis. Yes, I'm serious.

Source: my brother is a lying narcissist. I saw it first hand.

**UPDATE: The man Trump mocked turned out to be a Trump supporter named Frank Dawson, an ex-military man.

Dawson laughed off the incident, telling Fox News, “It’s all good! Everything’s good! I love the guy! He’s the best thing that ever happened to this country!”

Dawson said Trump made the mistake because he confused him with the protesters.

“He didn’t see me ripping the signs away from those three people that were sitting near us. They were trying to cause a ruckus, and they jumped up and they started yelling stuff.

I don’t even care what they were yelling about. That wasn’t going to happen beside me because I’m trying to listen to my president. I think [Trump] thought I was part of it, but I wasn’t.”

Weight jokes aside, President Trump touched on a number of topics at the raucous rally. At one point, Trump vowed to “always uphold the Second Amendment” amid escalating left-wing calls for stricter gun control following the El Paso and Ohio mass shootings.

At another point, Trump slammed the growing radicalization of the Democratic Party. Trump noted that the once-centrist party now openly champions socialism.

“Now we have a bunch of socialists or communists to beat,” Trump said. “Does anybody want to pay a 95% tax [rate]?”

“They view everybody as fascists and Nazis!” Trump said. “They accuse our heroic border agents of running concentration camps. And they look down upon the hardworking citizens who truly make our country run.”

The president also gushed about the U.S. economy, which is booming amid record-low unemployment.

“Whether you love me or hate me, you have to vote for me,” Trump said. “The United States right now has the hottest economy anywhere in the world!”

While the stock market has been extremely volatile, the US economy remains strong, even though China and Europe are experiencing significant slowdowns.

As we inch closer to 2020, many on the left are hoping a recession roils the country and that millions of people lose their jobs. Why? Because they believe that a sinking economy would hurt Trump’s chances for re-election.

As BizPac Review reported, comedian Bill Maher has been breathlessly rooting for the economy to crash since last year.

“We have survived many recessions,” Maher puffed on his HBO show. “We can’t survive another Donald Trump term.”

Maher was doubling-down on a similar statement he had made earlier that week. “I’ve been hoping for a recession!” he said. “People hate me for it, but it would get rid of Trump.”

That’s easy for Maher to say since he’s rich. It won’t be that easy for many Americans to weather a recession. But this is today’s left: Rooting against our nation’s best interests and hoping our president fails.