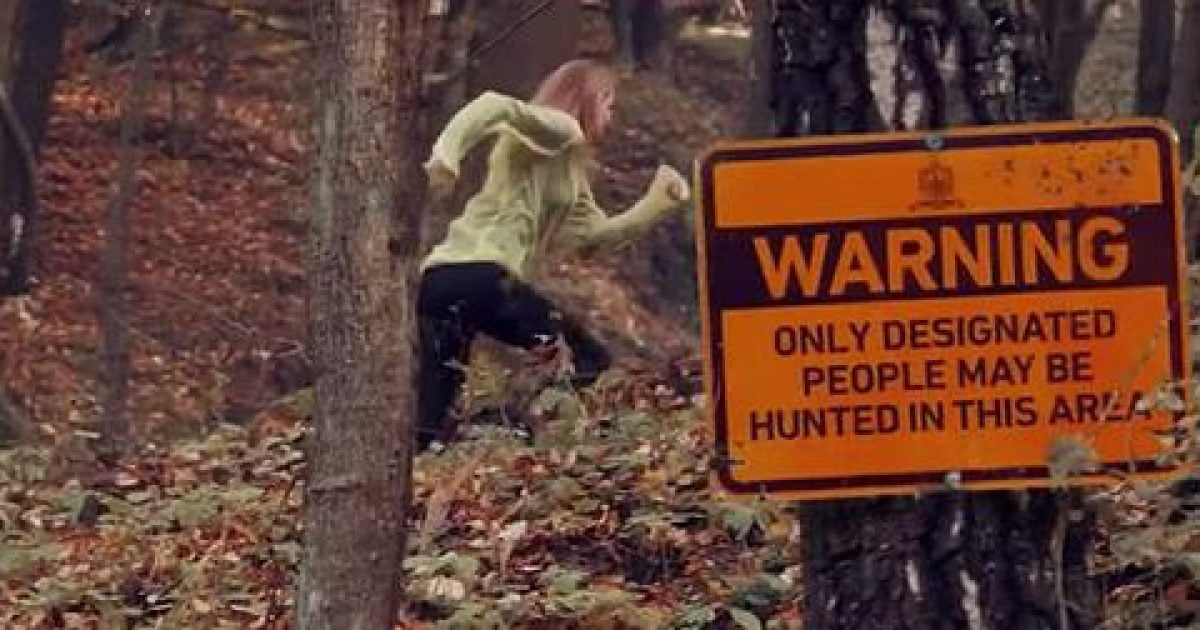 The upcoming release of a satirical film that reportedly depicts liberal elites hunting down and killing “deplorables” isn’t sitting well with real-life “deplorables.”

“Did anyone see what our ratf–ker-in-chief just did?” one character says early in the film, according to a screenplay reviewed by The Hollywood Reporter.

“At least The Hunt’s coming up. Nothing better than going out to the Manor and slaughtering a dozen deplorables,” another character reportedly adds.

Slated to be released in late September, the upcoming satirical film “The Hunt” was produced by Jason Blum, a noted anti-Trump zealot who was booed off stage at the 32nd Israeli Film Festival in Las Vegas last year after he blamed President Donald Trump for a rise in global anti-Semitism.

“A lot is on the line, the last two years have been hard for all of us who cherish the freedom as citizens of this country,” he said. “As you can see from this auditorium, it’s the end of civil discourse. We have a president who calls the press the enemy of the people. Thanks to our president, antisemitism is on the rise.”

That he would accuse a man who’s been described as the most pro-Jewish president in American history of promoting anti-Semitism certainly speaks to his zealotry and cognitive dissonance. What’s unclear is whether this zealotry accounts for his decision to produce a film that centers on leftists such as him literally killing their conservative political opponents.

What’s also unknown is who ultimately winds up the victor in the film — the liberal elites or the “deplorables?” Or do they reach some sort of compromise? What’s clear from the trailer is that the story does showcase the so-called “hunt” from both sides, with actresses Bettey Gilpin and Hillary Swank reportedly representing “opposite sides of the political divide,” according to The Hollywood Reporter.

While it’s possible there may be a deeper meaning behind the film — perhaps there’s a message at the end about the need for unity — the timing of its release is nevertheless problematic.

Within the past week, there have been two mass shootings — one committed by a white supremacist who’s been described as “right-wing,” and the other committed by a radical far-left activist.

Meanwhile, congressional Democrat and their media allies have been ratcheting up their arguably extremist rhetoric by positing an endless stream of hyperbole and misinformation.

The argument could be made that this is the exact sort of dangerous fear-mongering rhetoric that could that spur someone else to snap. The same could also be said of “The Hunt,” given as it appears to normalize violence against anyone to the right of Karl Marx.

“Why would anyone think it’s a great idea to have a movie about hunting down someone who doesn’t agree with them politically? It’s remarkable to me that the left blames Donald Trump’s rhetoric for violence, then literally spends millions to normalize -1. https://t.co/OWJRpwSQmv

The LEFT blames Trump, yet creates a movie that has elite liberals killing trump supporters. The left spent millions to normalize murder. More evidence of a #CivilWar in the making

blockbuster that killing of ‘deplorables’ outrage: ‘Demented and evil’https://t.co/2RKq42OKyo

This is deplorable! And they say President Trump is responsible for the hatred in this country! Ha, well he didn’t produce this movie filled with hate and violence!

“This certainly shows Hollywood for what it really is — demented and evil,” Media Research Center vice president Dan Gainor said in a statement to Fox News. “At a time when journalists try to blame President Trump for every act of violence in the world, wannabe Tinseltown terrorists are making sick murder fantasies about right-wingers.”

It’s especially concerning given that the left’s rhetoric and behavior has grown exceedingly more violent as of late. Within the past week alone, one former member of the left-wing media called for the president’s supporters to be “exterminated,” and a group of left-wing activists chanted death threats outside Senate Majority Leader Mitch McConnell’s home.

Because of concerns about the current political climate, ESPN reportedly pulled an ad for the film. And that’s it. No other network or group has taken action, including Universal Pictures.

“A high-level insider says top executives want to stand by Blum, one of the studio’s most prolific and successful producers, as well as filmmaker Craig Zobel, and see the project as a satire addressing an issue of great social importance,” The Hollywood Reporter confirmed. “But this person says plans could change ‘if people think we’re being exploitative rather than opinionated.'”

It’s unclear how it’s of “great social importance” to promote the murder of conservatives over their support for the Second Amendment and the right to life, among other things.

“The script for The Hunt features the red-state characters wearing trucker hats and cowboy shirts, with one bragging about owning seven guns because it’s his constitutional right,” The Hollywood Reporter noted.

“The blue-state characters — some equally adept with firearms — explain that they picked their targets because they expressed anti-choice positions or used the N-word on Twitter. ‘War is war,’ says one character after shoving a stiletto heel through the eye of a denim-clad hillbilly.”