Fox News favorite Dana Perino, the co-host of FNC’s “The Five,” is so confident that former first lady Michelle Obama won’t enter the 2020 presidential race that she pretty much just “bet” one month’s worth of her salary on it. Except it’s an entirely one-way “bet.”

The “bet” — and this term is being used loosely — was made during a discussion Friday evening on FNC’s “Tucker Carlson Tonight” about the prospects of Obama entering the race.

Watch the “bet” part of the discussion below:

The discussion about Obama actually began while Perino was speaking earlier about the dismay that some liberal Democrats feel over the current crop of Democrat presidential candidates.

“People in the Democrat Party are dismayed,” she said. “You had Michael Moore out there today saying, ‘Michelle Obama is our only hope.’ And that’s just another fantasy. If they don’t deal with the reason that they lose in 2016 and really deal with it, they’re looking at a situation …”

There’s a lot of turbulence on the left right now over who is best equipped to take on President Donald Trump. Though former Vice President Joe Biden commands the lead in polls, many liberal Democrats fear that he’s too “moderate,” too “old” and too “sleepy.”

After Perino finished expounding on her points, host Tucker Carlson cut in to ask, “Really quick, tell me why Michelle Obama getting in is a fantasy?”

Unlike his colleague, Carlson appears to think there’s a legitimate — albeit tiny — chance Obama could enter the race.

“Well, one she’s never going to do it,” Perino replied. “I think that is the case. Let’s say, if Michelle Obama decides to get in the race, I will donate a month’s salary to your favorite charity. How about that?”

“My favorite charity will be the ‘stop Michelle Obama from becoming president foundation,'” Carlson quipped in response.

Continuing the discussion, Perino then explained why she’s skeptical about Obama joining the race.

“I just think, she doesn’t even like politics. They have a great life. She doesn’t want to run. And in fact, she might not even be able to run. If Barack Obama is going to be too moderate for this new crowd, then I don’t know if even Michelle Obama would have a chance. But she’s not going to run.”

“Do you think she’s going to run?” she then pressed.

“I don’t,” Carlson replied, “but I do think that this field is weak, and I’ve never seen a group in a primary paint themselves into boxes faster than this group has.”

“I agree,” Perino replied, adding that the mere fact that so many liberal Democrats are wishing upon a star that Obama will enter the race is extraordinarily telling of how badly the party is functioning right now.

“If you have 25 people and out of those 25 you can’t find anybody, and you’re hoping that the former first lady of the United States is going to come in and save you, you have a much bigger problem on your hands than trying to win in 2020,” she noted.

But an even bigger problem than this is the party’s tilt to the far-left. A poll out this week found that a 48 percent plurality of independent voters believe the party has swung too far to the left.

It doesn’t help that the Democrat candidates up for office have been more than willing to embrace every radical proposal humanely conceivable, including but not limited to healthcare for illegals, open borders, the elimination of the private health insurance market, etc.

Dovetailing back to Obama, she made it fairly clear this week that she has no intention of running.

“Just between us, and the readers of this magazine — there’s zero chance,” she said during an interview with The National published in the latter portion of the week. “There are so many ways to improve this country and build a better world, and I keep doing plenty of them, from working with young people to helping families lead healthier lives. But sitting behind the desk in the Oval Office will never be one of them. It’s just not for me.”

This isn’t apt to please Moore, who’s disturbingly obsessed with her.

“Just go to C-SPAN and follow her book tour across the country. She’s playing 15,000-seat arenas in the Midwest. They have to turn people away. She takes the stage and she’s so powerful and so good. You just look at that and you think, ‘Of course. She could win.'”

It’s unclear why Moore believes that Obama would be immune to the president’s criticism. It’s also unclear what’s led him to believe she’d automatically defeat Trump in the debates.

Listen to Moore’s drooling praise for Obama below:

“Well, has anyone asked her?” he added. “I think if she were asked, ‘Look, we’re sorry about this, we have to come back to you. You have to go back to the White House. Your country needs you.’ If asked to serve, I believe she would serve.”

As usual, it turns out Moore was wrong and, surprise, surprise, the one and only Dana Perino was right. 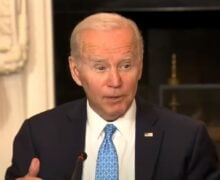