What makes Galicia’s “English” comment so strange is that he is an alleged U.S. citizen captured by ICE due to mishandled paperwork. In their report of Galicia’s detainment, CNN doesn’t dig too hard into why exactly Galicia has spent a good portion of his life in the United States, but can’t speak English — he was reportedly born in the U.S., then moved to Mexico for a time and then returned to the States when he was a teenager.

“They were not treating us humanely,” the boy said of detention center agents. He goes on to say that he almost agreed to be deported.

“…The stress was so high, they [detention center agents] were on me all the time. It was like psychological torture to the point where I almost [agreed to be deported]. I felt safer to be in the cell than to be with the officers,” he said.

Galicia was detained for 23 days because his mother had listed his place of birth as Mexico on a tourist visa and had also used a fake I.D. on his birth certificate.

Galicia’s background has come into serious question since his run-in with ICE.

The 18-year-old’s lawyer said Galicia plans on taking the federal government to court over his detainment.

Immigration attorney Claudia Galan has admitted that Galicia’s English is “not good,” which may have led to confusion when he was stopped by Border Patrol agents.

Galicia was detained at a U.S. Border Patrol checkpoint with his two brothers while they were on their way to Houston. All three brothers were detained, and Galicia’s older brother was deported because he was an undocumented immigrant. After providing a social security card, license and birth certificate, officers believed Galicia’s paperwork was fake.

“…you falsely represented yourself to be a citizen of the United States,” federal removal papers read about the case.

Though many leftists have gone after ICE for their detainment of Galicia, it likely didn’t help matters that on top of thinking his paperwork was fake, the teenager could not speak English.

Galicia claims that while detained he lost 20 pounds and despite a recent media tour showing shockingly good conditions at a California migrant detention center, Galicia claims he did not shower for the length of his detainment and he was forced to sleep on concrete.

“There were up to 70 people in a room,” Galicia said. “They wouldn’t let us brush our teeth or go to the bathroom. There were people who were very sick inside, and it’s really inhumane the way we were treated.”

U.S. Immigration and Customs Enforcement put out a public statement about Galicia’s detainment. They said Galicia provided “conflicting reports” which led to suspicion.

“This individual provided conflicting reports regarding status of citizenship after being apprehended by U.S. Border Patrol and transferred into Immigration and Customs Enforcement Custody. Situations including conflicting reports from the individual and multiple birth certificates can, and should, take more time to verify,” they said.

The statement continued, “While we continue to research the facts of the situation, the individual has been released from ICE custody. Both CBP and ICE are committed to the fair treatment of migrants in our custody and continue to take appropriate steps to verify all facts of this situation.”

Brian Hastings, Chief of Law Enforcement at the U.S. Border Patrol, testified before Congress that Galicia never said he was a citizen, which brings into question everything the 18-year-old is saying now in media interviews.

“Throughout the process, and while he was with Border Patrol, he claimed to be a citizen of Mexico with no immigration documents to be in or remain in the U.S.,” Hastings said.

A DHS notice, however, says Galicia was detained for falsely claiming to be a U.S. citizen.

A Border Patrol chief testified that 18-year-old Francisco Erwin Galicia never claimed to be a U.S. citizen when he was in Border Patrol custody for 23 days.

But that contradicts a DHS notice accusing Galicia of falsely claiming to be a U.S. citizen.https://t.co/XlCF4C2xBJ

Whatever the reason for Galicia’s detainment, clearly his paperwork is questionable and the fact that he doesn’t speak English likely led to serious confusion. If his paperwork raises red flags, he’s in a car with a relative who is an illegal immigrant and he is providing conflicting information either because of a language barrier or deception, what else are Border Patrol agents supposed to do?

Galicia shouldn’t be mad at Border Patrol agents. They were doing their jobs. He should be angry at members of Congress for doing little more than sitting on their hands when it comes to the border crisis. They can solve this situation, but they refuse to. They instead prefer to use the chaos as a platform to score cheap political points.

Oh, and another thing that just might help is if Galicia spoke English. It may not be politically correct to say, but a requirement to learn basic English if you’re a citizen of this country would help a great deal in cases like this. 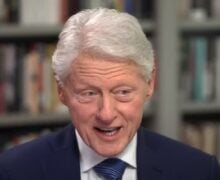