Democratic Michigan Rep. Rashida Tlaib has continued attending events and posing in pictures with one of her campaign fundraisers who repeatedly shared anti-Semitic conspiracy theories.

Maher Abdel-qader, a Palestinian-American businessman, was a key fundraiser for Tlaib in 2018 and organized campaign events for her around the country. The Michigan Democrat faced backlash after The Daily Caller News Foundation revealed Abdel-qader’s history of promoting anti-Semitic conspiracy theories.

In January 2018, for example, Abdel-qader shared an anti-Semitic video that claimed Jews aren’t actually Jewish, invented their historical claim to Israel, and secretly control the media. The video, which described Jews as “satanic,” also questioned whether 6 million Jews actually died in the Holocaust.

Abdel-qader apologized for sharing the video and deleted the post following TheDCNF’s report in January.

After the controversy subsided, Tlaib continued attending events and posing for photographs with Abdel-qader, who has continued posting content that plays on anti-Semitic tropes in a Facebook group that includes the congresswoman.

In a June 4 Facebook post, for example, Abdel-qader said the “Zionist lobby” is buying the “blind loyalty” of American politicians.

Two days prior to that post, on June 2, he posted an image saying America had forfeited its “sovereignty” to Israel.

He shared a video the same day that asserted Israel “controls U.S. foreign policy” through the influence of Jewish-American donors and the Israeli-American Council, a non-profit based in Los Angeles.

“Israel, the world is wise to your bullshit. Your cries of ‘anti-Semitism’ don’t work anymore,” read a meme Abedel-qader posted to Facebook on June 2.

Another meme, which he shared Saturday, reads: “Someone once asked me if I am anti-Semitic. I replied, ‘Not at all, I like Palestinian people!’” 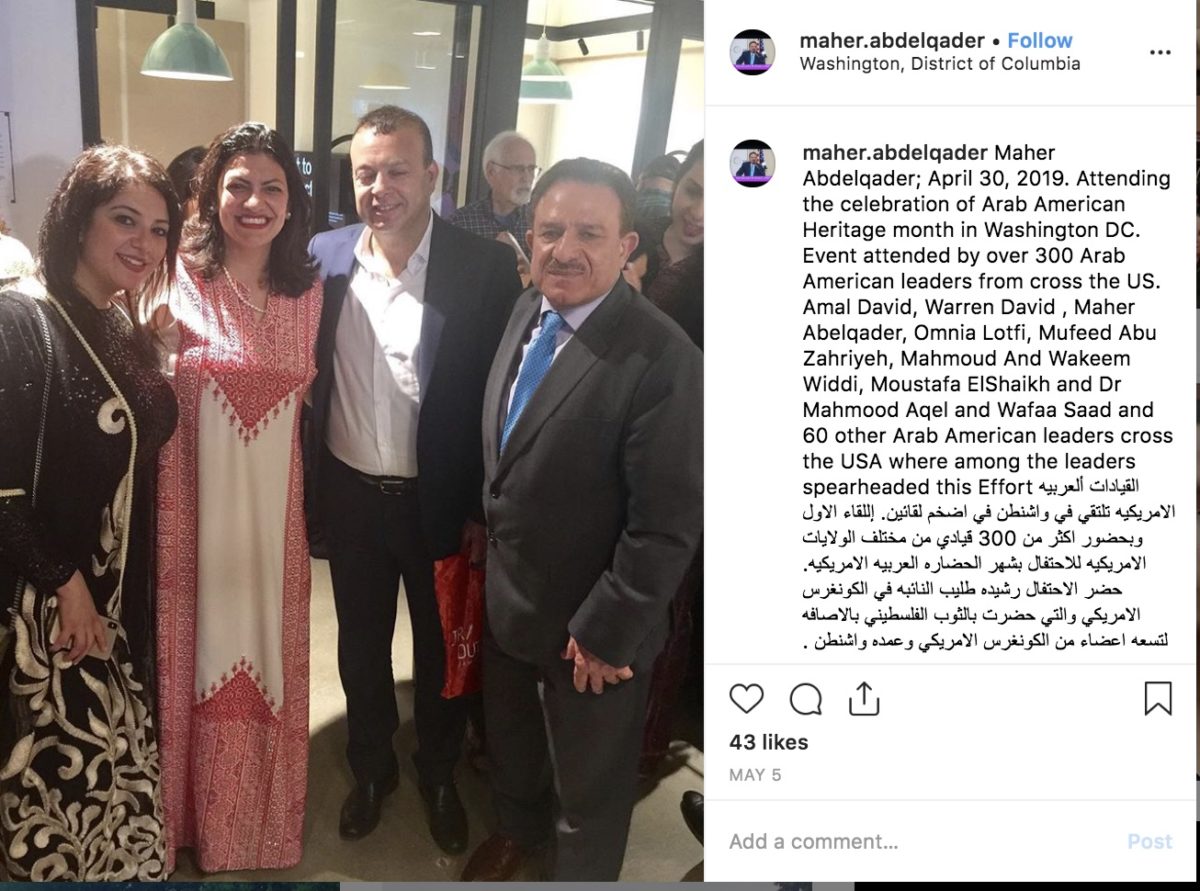 He posed for photos with the congresswoman at two events within the span of a week in April and May, his Instagram account shows.

Abdel-qader, who did not return an email seeking comment, played a key role in Tlaib’s 2018 campaign, according to both himself and Tlaib.

Abdel-qader took credit on Facebook for organizing fundraisers with Arab-Americans for Tlaib, pulling in hundreds of thousands of dollars for her campaign. Photos he posted on social media showed him speaking at Tlaib campaign events.

She also posted multiple pictures of herself with Abdel-qader on Facebook during the campaign and emphasized how important his support was to her.

Tlaib thanked Abdel-qader for his support in March 2018 and presented him with a medal showing her appreciation for his help with the campaign, according to Voices of New York, a project of the City University of New York (CUNY). 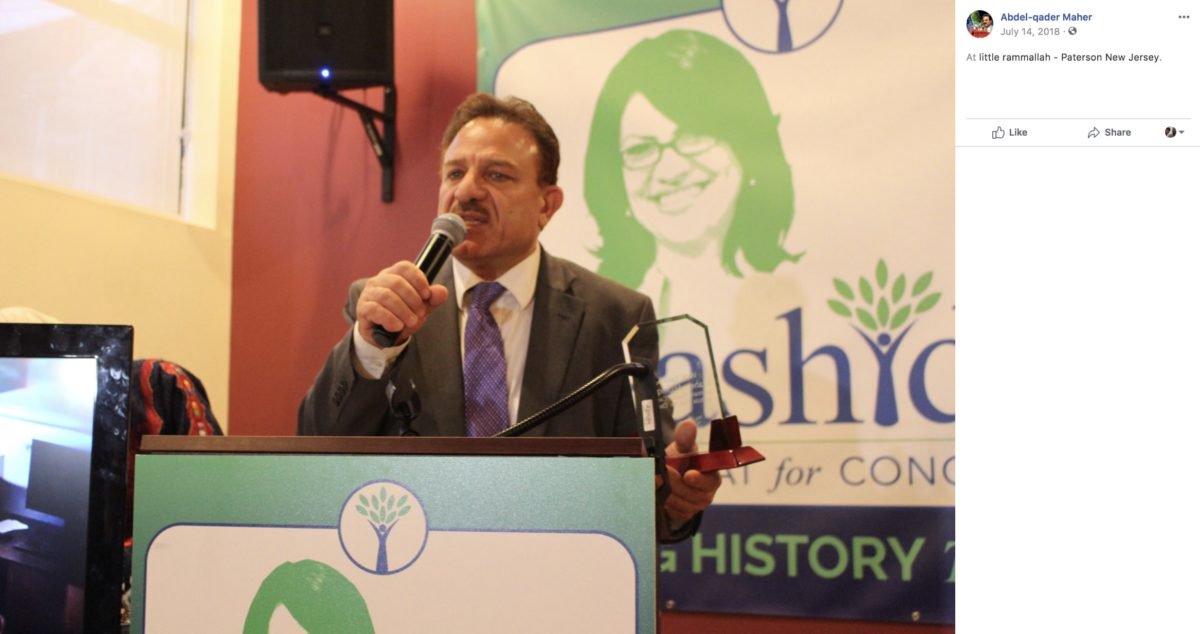 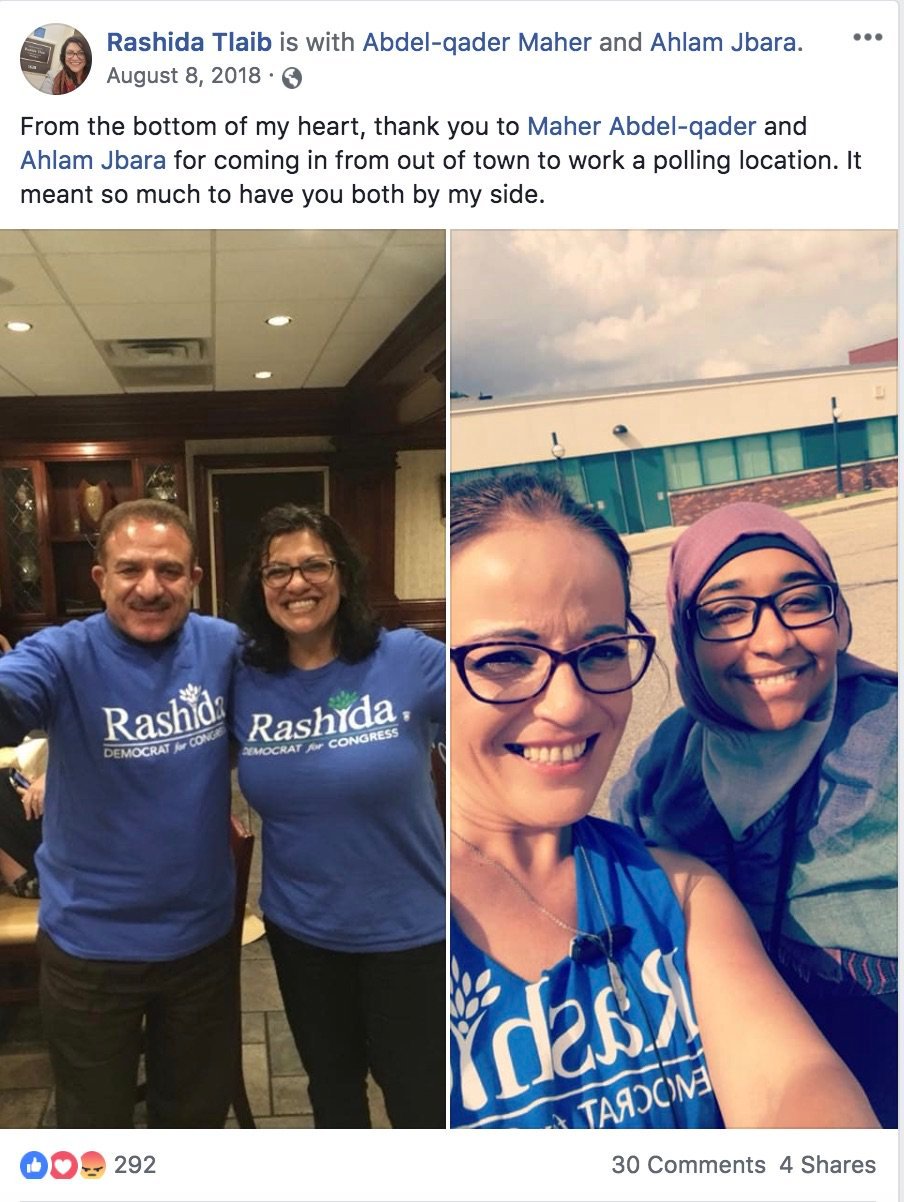 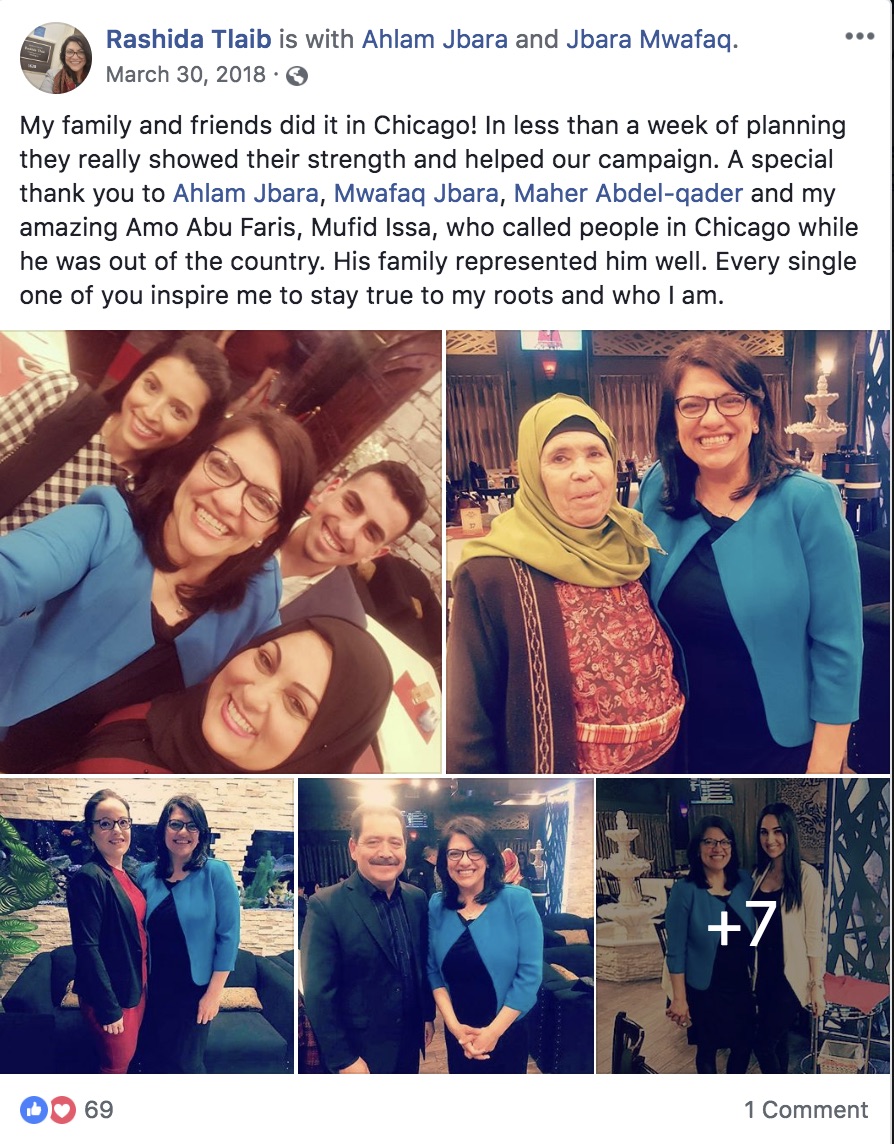 Tlaib, whose campaign did not return a request for comment, isn’t the only national political figure to rub elbows with Abdel-qader in recent months.

In June, Abdel-qader shared an Arabic-language news article that included a picture of him with Vermont Sen. Bernie Sanders’s presidential campaign manager. The campaign did not return a request for comment.

Abdel-qader in February posted four photos of himself with Rep. Ilhan Omar, who has also faced accusations of anti-Semitism. A spokesman for Omar did not return an email seeking comment.

The Minnesota Democrat faced criticism over a 2014 tweet in which she said Israel has “hypnotized the world” into ignoring its “evil doings.” She also said in March that American politicians were expected to have “allegiance to a foreign country,” referring to Israel. (RELATED: Rep. Ted Deutch Says Fellow Democrats Going Soft On Ilhan Omar’s ‘Anti-Semitic Lies’)

Abdel-qader wasn’t the only anti-Israel hardliner with ties to Tlaib during her 2018 campaign. Women’s March co-chair Linda Sarsour was an early Tlaib supporter and attended her swearing-in ceremony in January.

Sarsour and other Women’s March leaders have faced criticism for their support of Nation of Islam leader Louis Farrakhan, a notorious anti-Semite who has praised Hitler and described Jews as “satanic.”

Tlaib previously came under fire after posing for a picture at her swearing-in ceremony with Palestinian activist Abbas Hamideh, a supporter of Hezbollah who believes Israel shouldn’t exist.

The left-leaning Anti-Defamation League demanded an explanation from Tlaib, who said she didn’t know who Hamideh was.

Nine months before the controversy, in April 2018, Tlaib posted a photo of herself and Hamideh on Facebook.