A black Republican Marine veteran from Georgia who’s running for Congress is being dragged on social media by superfans of race-baiting Democratic socialist Alexandria Ocasio Cortez.

Why? Because Harrison Floyd promises to fight the festering rise of socialism in the United States the way he decimated anti-American terrorists during his multiple combat deployments.

“I’m a fourth-generation military veteran, and a former United States Marine,” Floyd says in a video announcing his candidacy. “I’m running for Congress because my family and I didn’t fight for our freedoms to allow our country to fall to socialism.”

Floyd vowed: “I’ll fight socialists in Congress the same way I fought terrorists in the desert. So help me God.”

In the stirring video, Floyd also shows off the numerous medals he was awarded for bravery during his three combat deployments as a machine gunner in the United States Marines (oorah).

He also spotlights his patriotic family, which has proudly served in the U.S. military for four generations. 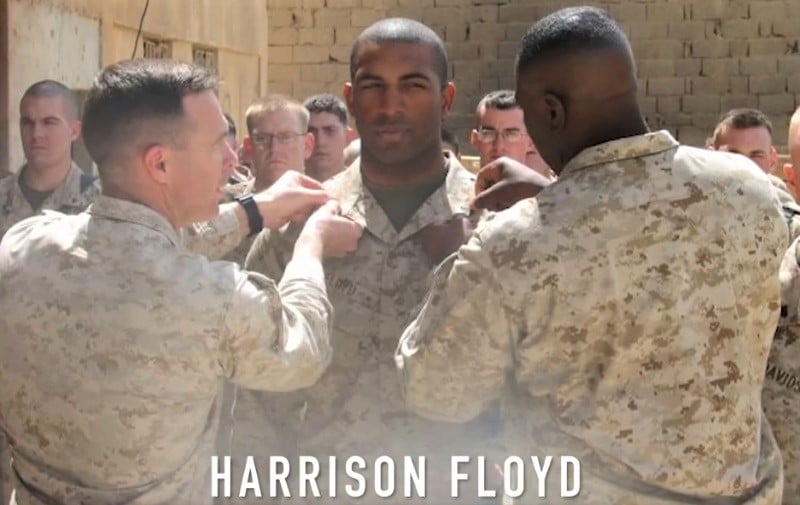 Carolyn Bourdeaux — a white Democrat who’s running against Harrison Floyd — accused this impressive black man of being aggressive and violent. (Gee, that doesn’t sound racist at all.)

“Violence has absolutely no place in our public discourse and I denounce this abhorrent video in the strongest possible terms,” Bourdeaux tweeted. “This message doesn’t represent GA values and for Harrison Floyd to enter this race by inciting violence is wrong.”

Floyd clapped back on Twitter, saying he’s not “going to shut up” because of her whining and hollow virtue-signaling.

I’ve got news for @Carolyn4GA7, I’m NOT going to shut up. #TeamFloyd #GA07 #GAPol pic.twitter.com/ioTupl4OHv

One person tweeted: “Harrison Floyd just threatened AOC with actual firepower. How is this acceptable?”

Harrison Floyd just threatened @aoc with actual firepower. How is this acceptable?

Another chimed in: “Harrison Floyd is the worse bamboozled black Republican trash I have seen in a good minute. The bamboozlement is strong with this clown.”

Harrison Floyd is the worse bamboozled black republican trash I have seen in a good minute. The bamboozlement is strong with this clown. #justgoaway #youlose #whyareyouevenhere #youmakeblkpeoplelookbad pic.twitter.com/kbV1cgjXgr

One when critic suggested that Floyd has brawn but no brains, another clapped back: “He got a B.A. and Masters from George Washington Univ (both w/honors) as well as a Certificate in Finance Leadership from Yale…. all in 4 1/2 years. I think he has both.”

He got a B.A. & Masters from George Washington Univ ( both w/ honors) as well as a Certificate in Finance Leadership from Yale…. all in 4 1/2 years. I think he has both.

Still another woman said: “Harrison Floyd, do not pull your ad. The last time I checked this was still AMERICA.”

Harrison Floyd, do not pull your ad, the last time I checked this was still AMERICA

Many Dems also disgusted by party’s embrace of socialism

Meanwhile, it’s not just Republicans who are outraged by the Democratic Party’s increasing move to the far-left. As BizPac Review reported, two-term Democrat Congresswoman Stephanie Murphy is disgusted by her party’s embrace of socialism.

Murphy, the first Vietnamese-American woman in Congress, says growing up in  socialist Vietnam gave her firsthand experience of the horrors of socialism.

Meanwhile, Venezuelans today are forced to dig through trash for their next meal after socialism destroyed their once-wealthy country.