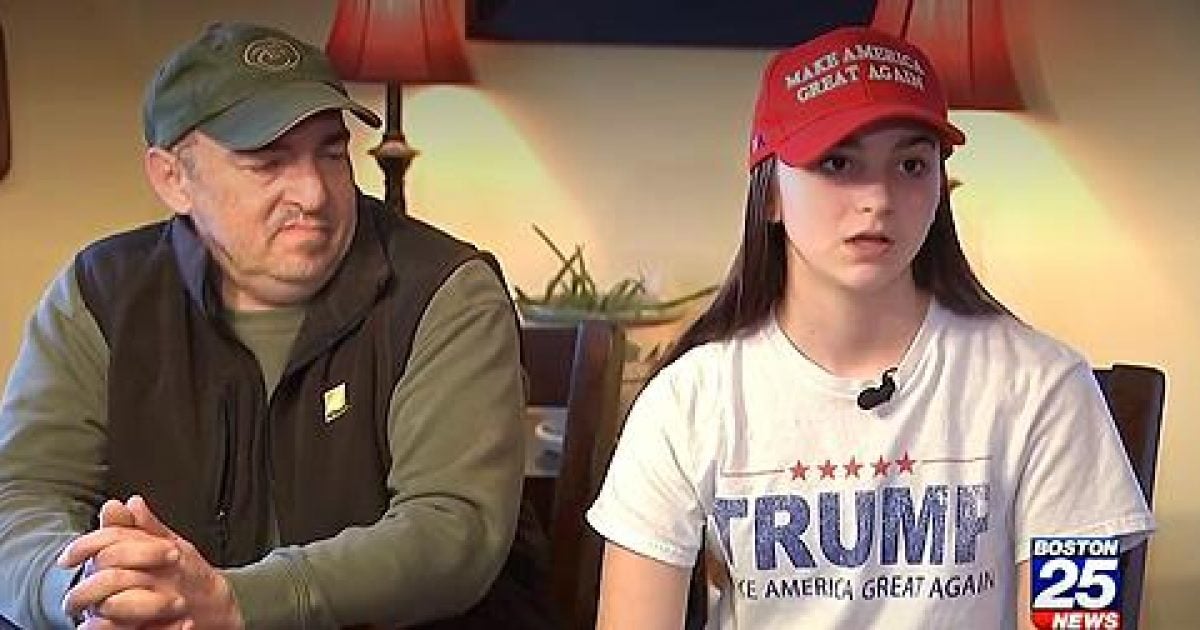 Given that “Make America Great Again” is the slogan of President Donald Trump, Epping High School freshman Ciretta Mackenzie figured the gear was a perfect match for the celebration.

But apparently, she thought wrong.

Epping High School freshman Ciretta Mackenzie chose to wear her MAGA gear on ‘America Day’ at school. She was asked to cover up her shirt by the principal, she feels she did not violate the dress code policy and believes her rights were violated @boston25 pic.twitter.com/aPTRbjXsuY

According to local station WFXT, upon arriving at school on Monday, Mackenzie was ordered by the school’s principal, Brian Ernest, to cover up her MAGA t-shirt and remove her MAGA hat. Why? Because both items allegedly violated the school’s dress code policy. Mackenzie says that’s false.

“If it said no political gear, I could understand why it was dress-coded, but it didn’t say that, so I feel like I’m obligated to have my own opinion and other people can have theirs,” she explained.

She and her father both believe that the real reason that Ernest had ordered her to remove her MAGA gear is that he disagrees with her pro-Trump political views.

“We don’t have to agree, that’s fine,” she continued, adding, “I hope just what comes out of it is … people need to understand that it’s OK to have different opinions.”

Unfortunately, many Americans both young and old don’t understand this concept, including apparently her principal, as well as some of her peers at Epping High School.

“Some kids are making [me] feel like I’m uneducated and a bad kid for believing what I want to believe and that’s not right,” Mackenzie said to station WFXT.

She was right. It’s not right to imply or say that someone is “uneducated” (or “toothless“) just because of his or her political beliefs. Many Americans, including impressionable children, believe otherwise because of the irresponsible rhetoric of both Democrat legislators and their media allies.

Ever since Trump entered the 2016 presidential race in 2015, his supporters have been disparaged as everything from “deplorables” to alcoholics, drug addicts, racists, homophobes, you name it. Given what Mackenzie’s peers hear on TV all the time, it’s no wonder they’ve adopted such bigoted views.

It’s also presumed that her young peers frequent social media. And it just so happens that social media is teaming with grown adults who also like to espouse such clear-cut bigotry.

For instance, note how some members of the left are responding to this story:

could hv worn her white hood n robe instead since they mean the same thing.

Fuck her! That’s what I think.

I think it’s clear that she shares the beliefs of her family and that she’s never even thought to think for herself and her own personal moral code. Hard to break from the mold, and not much acceptance comes alone with it. Even harder when it’s your family.

These Twitter users — grown adults who’re supposed to serve as role models to the youth — can be seen above accusing Mackenzie of being a member of the Ku Klux Klan, of being a snowflake, of being a dolt who’s “never even thought to think her herself” and of having an ignorant family.

These are the same sorts of far-left types who falsely accuse the president of bullying others when he stands up to unfair, inflammatory criticism from Democrats and their media allies.

Ernest reportedly issued a letter to the local community this week seemingly downplaying his actions.

“Since the event of April 8, there has been a multitude of responses, some of which have fact-based information and other responses less factual,” he wrote. “I have always been respectful and sincere in my approach to promote civil discourse and free speech/expression. I want our students to be free thinkers and be able to express their opinions in a respectful manner.”

His behavior — not to mention his refusal to apologize — suggests otherwise.

“The Epping School Board and Epping District’s position is that this event should not ever have taken place, and we are committed to the creation of a school environment that promotes open and free thought and dialogue,” she reportedly wrote.

Save for a few radically left-wing haters (including Principal Brian Ernest, it would seem), most social media users appear to agree that “this event should not ever taken place.”

Her rights were violated. Shame on that administration

I believe Ciretta’s rights were violated as the Principal applied his personal bias against her-In an attempt to not make other students feel uncomfortable, he opened the door for her to be uncomfortable-My advice: sue the principal & the school district for violating her rights

I now see it is true, sad state of affairs. I call NH home, and I am embarrassed to see that Epping High school has chosen the Liberal hate agenda over LIVE FREE or DIE!! Democrats need to grow up!!! The President won fare and square!!

But if it was a “Hope” shirt I am sure it would have been OK. I am so tired of people being offended by someone supporting our president. This is the real world, you might not like what people have to say but they have the right to say it. Learn to be an adult and deal.

In a statement to WFXT, Mackenzie’s dad suggested that even if the school’s dress code barred political gear, it would have still been wrong to make his daughter change clothes.

“We don’t want politics to be totally removed from school. It needs to be in school. … The way they went about it was remove everything. You don’t want that,” he argued.