Chicago Democrats did what you would expect them to do in the face of the Jussie Smollett embarrassment, both in the actions of the disgraced actor and prosecutors, who granted him a reprieve for allegedly staging his own hate crime — they played the race card.

But Democratic Congressman Bobby Rush, who has been in office over 26 years, took it even further, declaring that the Chicago police union is “the sworn enemy of black people” for not going along with the ruse, Fox News reported.

Rush, 72, was responding to the controversy surrounding Kim Foxx, the black State’s Attorney for Cook County, Illinois, and her office in the handling of the Smollett case, when he ripped Chicago’s Fraternal Order of Police for calling on Foxx to resign.

“Let’s be clear: Kim Foxx, her battle is with the FOP and all of their cohorts,” he said.

Kevin Graham, the president of the city’s FOP, appeared on Fox News last week to call on Foxx to resign, calling the decision to drop all charges against Smollett the “tip of the iceberg” when it comes to the prosecutor not pursuing felony charges. 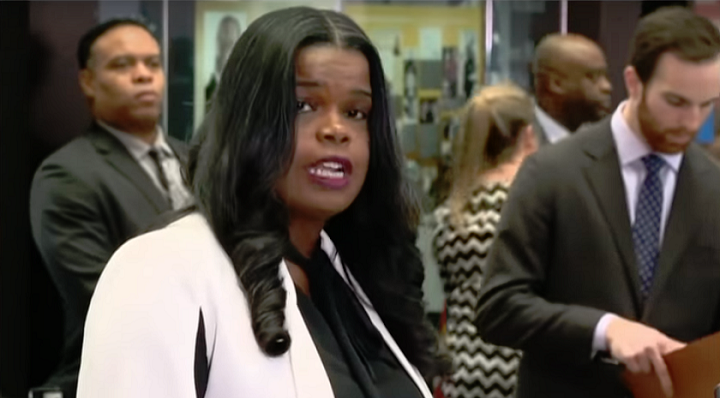 He said the police union took a formal vote to show their lack of support for Foxx.

“We’re saying: this is enough,” Graham said. “We’re asking for her to step down, the FOP in Chicago took a vote of no confidence and so did the police chiefs around Cook County.”

The union called on officials to denounce Rush’s “ignorant, offensive, malicious, and false statements” in a Facebook post on Saturday.

The post added: “These outrageous and irresponsible comments have demeaned each and every Chicago Police Officer, regardless of their race.”

Chicago Police Superintendent Eddie Johnson, an African-American, was furious over the decision to drop charges against Smollett, telling reporters Foxx’s office did not inform them ahead of making the announcement.

“At the end of the day it was Smollett who committed this hoax,” Johnson declared.

And let’s not forget that Tina Tchen, who served as then-first lady Michelle Obama’s chief of staff from 2011 to 2017, intervened on behalf of Jussie Smollett and family in the case, trading messages with Foxx about the alleged hate crime hoax before she decided to drop 16 felony counts against the actor.

Foxx’s office announced early on that the prosecutor had recused herself in the case, only to later say she did not “formally” recuse herself, explaining they used the term “colloquially,” for the sake of appearance.

Hundreds of protesters demonstrated outside Foxx’s downtown office last week, with claims there were white extremists in the crowd, the Chicago Tribune reported.

“It is as if the media cannot even tolerate the police exercising their own First Amendment rights and must find some way, any way, to condemn the police, even if it means tying us to some racist hate group few of us have even heard of,” the FOB vice president posted.

Not that Foxx was deterred from seizing on the opportunity.

“The injection of white nationalists in this conversation for me, I will tell you personally, I was afraid,” Foxx said Saturday.