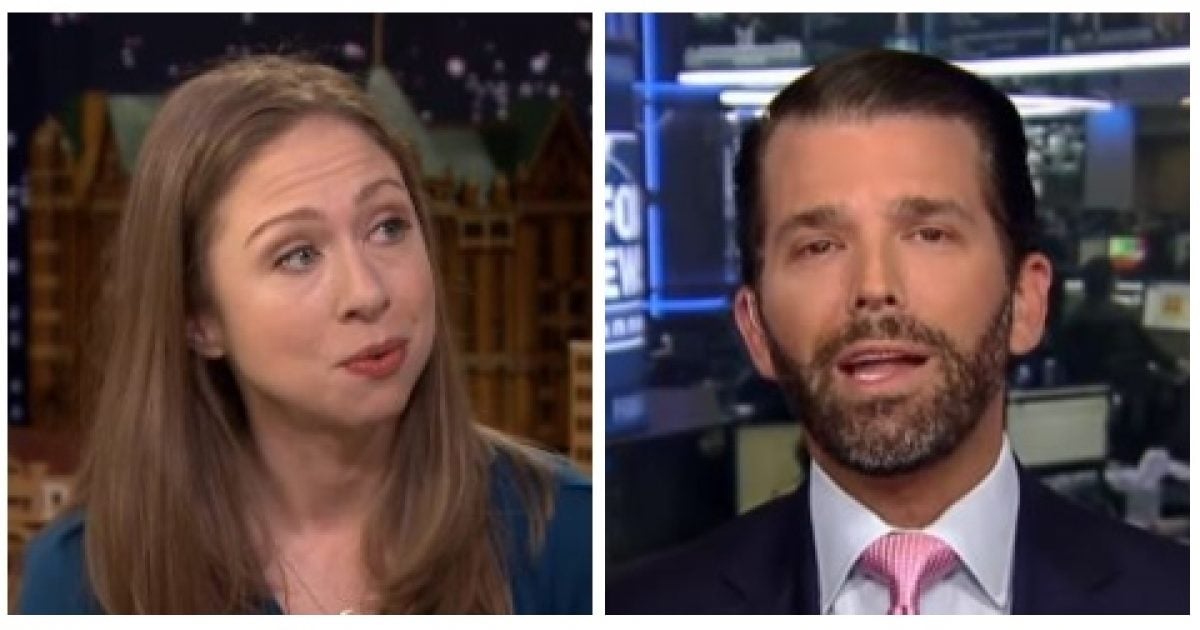 Donald Trump Jr. came to the defense of Chelsea Clinton following a confrontation in which the former first daughter was blamed for the New Zealand mosque shooting.

“It’s sickening to see people blame @ChelseaClinton for the NZ attacks because she spoke out against anti-Semitism,” the eldest son of President Trump tweeted Saturday.

It’s sickening to see people blame @ChelseaClinton for the NZ attacks because she spoke out against anti-Semitism. We should all be condemning anti-Semitism & all forms of hate. Chelsea should be praised for speaking up. Anyone who doesn’t understand this is part of the problem.

At a vigil held Friday for the victims of the massacre at two mosques in Christchurch, New Zealand which claimed the lives of 49 people, Clinton was lectured by New York University students over her previous remarks condemning anti-Semitic comments made by Rep. Ilhan Omar.

“I am so sorry you feel that way. It certainly was never my intention. I do believe words matter,” the pregnant daughter of former President Bill Clinton and former Secretary of State Hillary Clinton, calmly responded to the angry students cluelessly holding her accountable for the horrific tragedy.

Clinton had tweeted her “heartbroken” response to the massacre on Friday.

Heartbroken & horrified by the white nationalist terrorist attack during Jummah on the mosques and Muslim community in Christchurch. Keeping all affected by this tragedy in my heart and prayers. We need a global response to the global threat of violent white nationalism.

“Chelsea should be praised for speaking up,” Trump Jr. tweeted, defending Clinton’s condemnation of the remarks by Omar. “Anyone who doesn’t understand this is part of the problem.”

Minnesota Democrat Omar came under fire for her comments and tweets about the “dual loyalty” of congressional members on Israel, with her remarks on the Israel-Palestine conflict and on Israel itself drawing backlash from many, including top-ranking Democrats and her colleagues on the Foreign Affairs Committee.

The confrontation of Clinton and her handling of the tense incident went viral and prompted an outpouring of support for 39-year-old, soon-to-be mother of three. Many conservatives joined Trump Jr. in their support of Clinton and criticism of the students.

Let me get this straight. Because @ChelseaClinton dared criticize @Ilhan‘s anti-semitic comments, Chelsea is somehow responsible for the #NewZealandMosqueAttacks?!? https://t.co/D4sHy4CXRK

You deserve all the criticism in the world right now. https://t.co/hATiUWuLb7

Turning Point USA’s Candace Owens, who faced her own social media firestorm when the left bought into the New Zealand shooter’s ploy to blame her for the tragedy, commented on Clinton’s experience.

Agreed. It should go without saying but neither myself, @ChelseaClinton or Spyro the Dragon had anything to do with the tragedy in New Zealand.

Fox News’ Greg Gutfeld caught the underlying irony in the defense of Clinton by conservatives on Twitter.

when the left has led the right to staunchly defend Chelsea Clinton, then the left must be irretrievably lost.

@ChelseaClinton please note that the right is defending you. Something the left would never reciprocate

If the left is eating their own…let’s not get in the way.

I don’t care who I defend, wrong is wrong. Thanks for this @greggutfeld. We have to call out people no matter who they attack. @ChelseaClinton certainly did not deserve the ambush. I am simply tired of this type of political response.

She should not have to apologize for calling out anti-semitism. I cannot stand her, and cannot believe I am defending her, but we have way too many nuts in Congress now from far left to far right

This is what the Left created. It’s out of hand. They’re all spoiled children & will never be happy. They think anything they say/do is profound & worthy. The Left has no Order & no class. They’re just spoiled folks running amok w/scissors.

To be fair everyone regardless of political swing should be defending her.

I am proud to be associated with the right. We stand up and defend what is right and don’t play identity politics ??

What a world we live in.