Democrat Senator Elizabeth Warren is taking pandering to a whole ‘nother level. The 2020 presidential candidate is hoping that being photographed with her dog will make voters forget that she lied about being a Native American.

And now, Warren and the liberal media are being called out for shamelessly using her golden retriever to promote the “Elizabeth-Warren-is-likable” narrative.

Specifically, Politico was mocked for doing a “puff piece,” where it admitted that Warren is counting on her dog Bailey to “help humanize her.”

GOP strategist Andrew Surabian quipped: “The top story on Politico right now is literally a puff piece on Elizabeth Warren’s dog, but please lecture me on how the media is equally as tough on Democrats as they are Republicans.”

Donald Trump Jr: ‘You Have Issues’

Donald Trump Jr. observed: “When you need to make a social media account for your dog to “humanize yourself,” you might have some issues.”

When you need to make a social media account for your dog to “humanize yourself” you might have some issues. https://t.co/6VZAb0OwxA

There are about a zillion reasons why I love my sweetie Bruce, but I wanted to mention one: he’s always been my biggest supporter. When we got married, he gave up his teaching job in Connecticut to build a family with my kids and me in Houston. When I became a law professor at Harvard, he spent years traveling back and forth on weekends so we could make it work. And when it comes to taking on the big Wall Street banks and fighting for working people, Bruce has always thought that if I want people to listen, I should shout from the highest mountain I can find. Happy Valentine’s Day, Sweetie. I’m very lucky to have you by my side for all of life’s big adventures.

I’m pretty sure our #Warren2020 Official Good Boy had a great time in Lawrence last weekend.

Elizabeth Warren is hoping that being photographed with her dog will help her reap the “Halo Effect” that an adorable golden retriever would transfer onto her.

Like her pal — two-time failed presidential candidate Hillary Clinton — Warren is seen as a lying, shilling, unlikable person. It’s a dramatic turnaround from 2016, when many Democrats wanted Warren to be their party’s nominee over Hillary.

But that all changed when President Trump nicknamed her “Pocahontas” and called her out for exaggerating her “Native American” background. Trump did that in response to Warren’s repeated race-baiting attacks on him.

The fallout was fast and furious.

On March 3, CNN host David Axelrod — a former Obama aide and Hillary superfan — asked Warren why she claimed she was “American Indian” on her 1986 Texas Bar registration card.

Axelrod: “Why did you in 1986 fill out on your…application ‘American Indian’? Because obviously, that’s a very small part of your lineage. So why did you do it?” 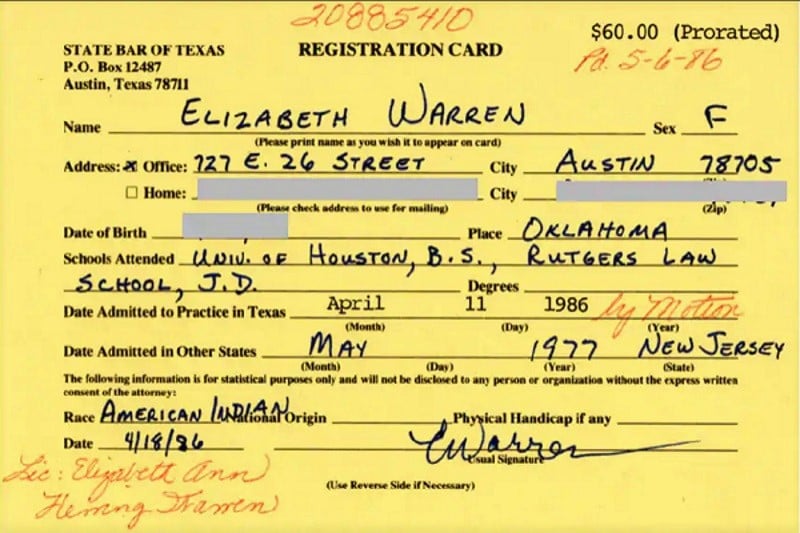 Warren had no defense: “Based on what I learned growing up, and the fact that I love my family, decades ago I sometimes identified as Native American.”

Axelrod added: “The universities kind of fudged and used you for their own purposes.”

Warren lied again: “It never had anything to do with my getting a job. Even so, I shouldn’t have done it. I’m not a person of color, I am not a citizen of a tribe…I think I have [learned from it].”

Harvard Bragged About Its ‘Native-American’ Hire

For leftists who claim that the president’s rebuke of Senator Warren is racist, it bears noting that an actual descendant of Pocahontas is a Trump supporter.

Actual descendant of Pocahontas: If she were alive today, ‘she’d be very proud of President Trump’ https://t.co/viDwRDIVAm pic.twitter.com/Si6KTYehev

Thomas Begay — one of the Navajo code talkers honored by President Trump in November 2017 — was asked if he was offended by the “Pocahontas” joke. Begay said hell no.