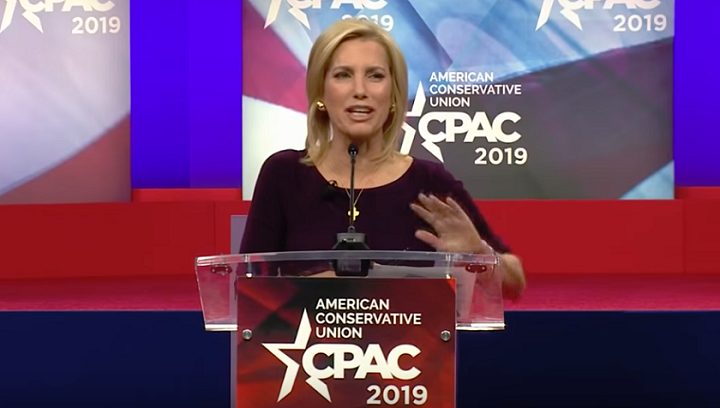 Talk about the pot calling the kettle black.

CNN White House Correspondent Jim Acosta and all around Trump antagonist Jim Acosta got his panties all bunched up over Fox News host Laura Ingraham exposing his narcissism while speaking at the 2019 Conservative Political Action Conference.

Taking to Twitter, Acosta called the opinion host a propagandist, though Ingraham would quickly prove she can give as good as she gets.

It all began when Acosta complained about President Trump not calling on him at a news conference in Hanoi after the summit between the president and North Korea dictator Kim Jong Un.

As usual, the CNN reporter who all but cheered for the president to fail in his efforts, played fast and loose with the truth during an on-air segment, suggesting Trump did not call on White House press corps journalists so he could avoid questions about former personal attorney Michael Cohen, who appeared before Congress this week.

“First of all, we have to point out the obvious,” Acosta said. “Which is the president steered clear largely during this news conference of the White House press corps and instead selected journalists at random from the other side of the room, where foreign journalists were seated.”

That assertion is not true and Acosta was just upset because HE wasn’t called on and Ingraham told the gathering of conservative politicos as much on Thursday — the very mention of his name drew loud boos from the CPAC audience.

With a little encouragement. Wink, wink.

“Jim Acosta of CNN. He’s a nice person,” Ingraham began. “He was complaining this morning on television — I know that’s not news — he was complaining that President Trump didn’t call on U.S. media at the summit presser and that he only called on the Russian and the Chinese journalists.”

“Well it turns out, a producer just told me, he called on ABC, The Washington Post, The New York Times, Bloomberg, and NPR. But he just didn’t call on Jim Acosta. The land of narcissism knows no bounds.“

Given the disposition of much of the U.S. media toward President Trump, Ingraham added, “Kind of interesting and kind of sad because he’d probably get a better shake from the Chinese and Russian journalists.”

This prompted Acosta to tweet/whine: Of course Laura Ingraham sides with the folks at Russian and Chinese State media. Those are her kind of people.”

Of course Laura Ingraham sides with the folks at Russian and Chinese State media. Those are her kind of people. #PropagandistsUnited https://t.co/2Yz7KYbhei

Ingraham fired back… with both barrels.

“Of course Jim @Acosta, who mischaracterized the Trump #Hanoi presser, can’t take a joke and reacts with invective. ‘[My] kind of people’ includes reporters who stick to the facts and don’t need to make themselves the center of every story. Try it sometime,” she answered.

Showing she had a little hashtag game, she added: #AmericaUnited.

Of course Jim @Acosta, who mischaracterized the Trump #Hanoi presser, can't take a joke and reacts with invective. "[My] kind of people" includes reporters who stick to the facts and don't need to make themselves the center of every story. Try it sometime. #AmericaUnited https://t.co/6WuKL4J6i8

During the hand off from Sean Hannity Thursday night, as Ingraham took the reins to begin her own show, she offered to give Acosta “dried seaweed and elixirs.”

“I think he’s having a hard time,” she deadpanned.

The response online to the spat between the rival network personalities began with the obvious: