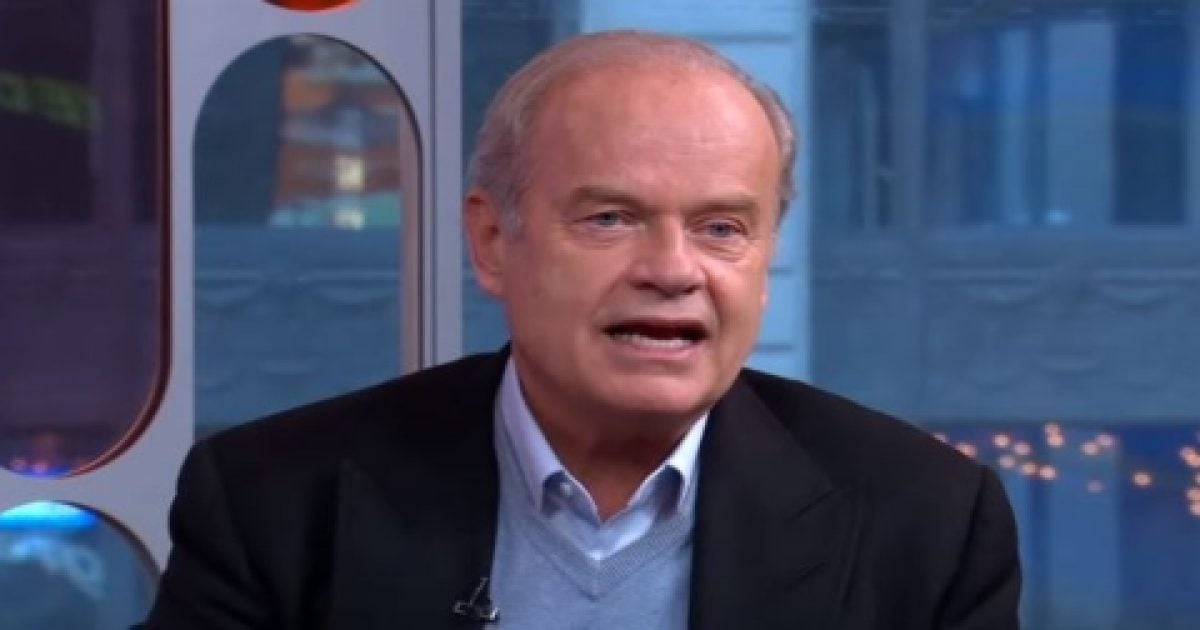 Actor Kelsey Grammer threw his liberal fans into a tailspin after openly discussing his support for President Donald Trump.

The 63-year-old actor, well known for his role in the TV sitcom “Fraiser,” took a dig at the left as he spoke about his support of Brexit and Trump during an interview with BBC Radio.

LISTEN | Legendary actor @KelseyGrammer speaks sense on Brexit and Trump and refuses to apologise for being a conservative. The far-left are already out to get him for daring to think for himself!

While admitting he isn’t a “big government guy,” Grammer acknowledged the presenter’s observation that it is “unusual” for him to be a Trump supporter in liberal Hollywood.

“I’m a conservative. I have been for a long time. I’m just not a big government guy,” Grammer said, straying off the topic of his performance in the English National Opera’s musical “Man of La Mancha.”

“I do overhear the talk about Brexit and stuff and I think, ‘Well, why are they voting again for it?'” Grammer went on, referring to the impending departure of the United Kingdom from the European Union. “I think, well couldn’t you vote once?”

“But that’s a bit like – we do this in America too these days,” he added. “It’s sort of like you keep voting until you get the result you want.”

It’s only bloody Frasier. In my radio studio. Meta. Got him to do a link and everything. We talked Trump, why he would vote for Brexit but most importantly – that Frasier is hopefully coming back but not as a radio host. His new profession? Running a dating agency. @bbc5live 10am pic.twitter.com/kzZLKOr21z

When asked if “controversies” surrounding Trump may have caused him to have any “change of mind,” Grammer replied that he was okay with the president’s policies.

“In terms of policy, I don’t have a lot of problems with what he’s doing. He’s a bit of a brat, I guess you could say,” he continued. “And that is astounding for people especially for people who come from the more liberal side of politics. They’re used to being the brats.”

Grammer went on to note how Trump’s ability to come back at his critics has been a surprise for some.

“They just never had anybody come back at them in the same way. We’ve witnessed in American politics the same basic language since Ronald Reagan,” he explained. “This is the first guy who fires back, so it’s really unpleasant and they thought he shouldn’t be elected anyway.”

The actor’s comments caused a crisis on social media where the left was disappointed by his conservative stance and shocking approval of Trump.

Kinda disappointing to hear about Kelsey Grammer right now, looked up to Fraser when I was a kid of some who was more intelligent than the average doing well for themselves. Now he’s just a git.

Finding out he’s a supporter of Trump and BREXIT was an awful shock. I can’t listen to him now, it makes me feel sick.

I used to quite like Frasier….
He’s in the studio promoting his upcoming west end show. Not sure declaring support for Trump and Brexit is the best way to do that..

Kelsey Grammer bids goodbye to his British fan base as he comes out as a Trump Supporter; pic.twitter.com/zFtHVW7evu

The bigots who have just stopped liking Kelsey Grammer because he thinks differently about some stuff than they do though… pic.twitter.com/QyTtxDSWve

And the mob is out again in full force today to vilify anyone with different political views. Todays subject: Kelsey Grammer, a pro-Trump, Brexiteer. pic.twitter.com/662cx6aVhI

Oh no. Kelsey Grammer holds different political beliefs to me. I better discard my Frasier boxset immediately and blow up my TV just in case Channel 4 shows a repeat.

So Kelsey Grammer speaks out in support of Trump and Brexit and the anti-everything self-righteous mob go into predictable meltdown whilst conveniently ignoring the fact that millions of ordinary people voted for both Trump and Brexit. But they apparently, know best… #fuckoff

Twitter reacting to Kelsey Grammer being a republican pic.twitter.com/SNli8ZenyB

BREAKING: Kelsey Grammer has a different political opinion than I do.

Kelsey Grammer, famous Republican, is a Republican.
The internet: pic.twitter.com/TigUrnTpUT

Grammer’s political views were no surprise, however, to anyone who was paying attention.

Who didnt know he was a staunch republican?

Fans of Grammer, who once told BBC Radio 4’s Desert Island Discs that being a Republican in Hollywood is like having a “target on your back,” couldn’t have been happier.

Just when I thought I couldn’t love Kelsey Grammer any more.