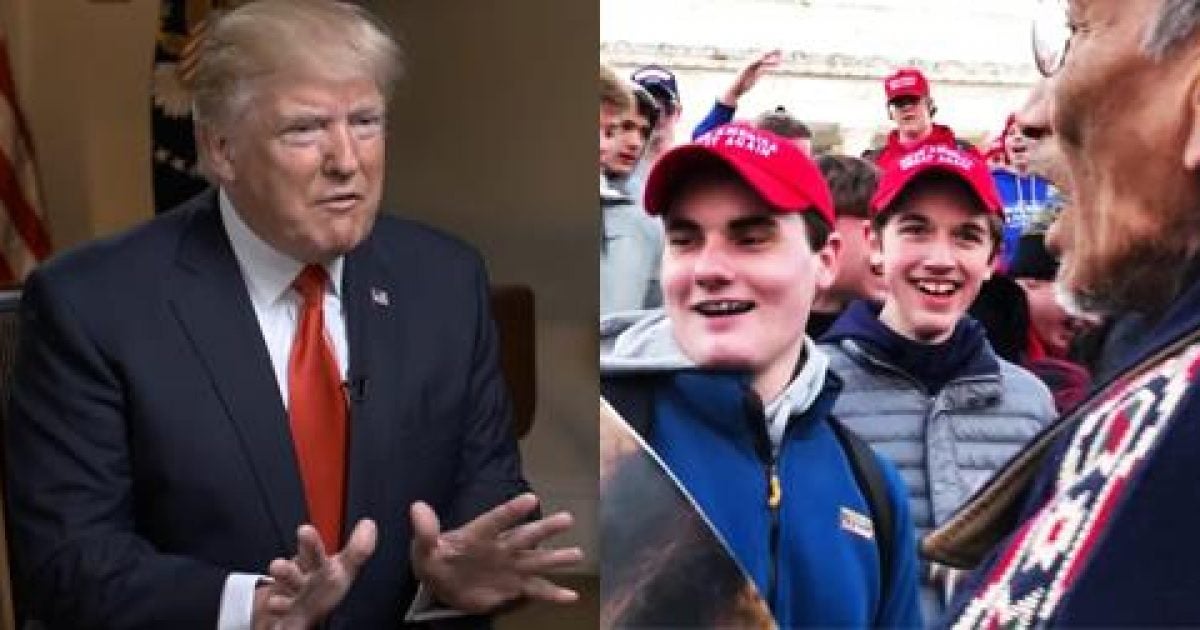 President Donald Trump weighed in on the Covington Catholic High School controversy in a tweet Monday evening, hours after word broke that the MAGA hat-wearing Covington students smeared by the media over what occurred at the Lincoln Memorial were considering taking legal action.

“‘New footage shows that media was wrong about teen’s encounter with Native American’ @TuckerCarlson,” he added, this time quoting from a segment of Fox News’ “Tucker Carlson Tonight.”

Looking like Nick Sandman & Covington Catholic students were treated unfairly with early judgements proving out to be false – smeared by media. Not good, but making big comeback! “New footage shows that media was wrong about teen’s encounter with Native American” @TuckerCarlson

Earlier Monday broke that the students were considering legal action, though it remains unclear whom they’d sue, given as the list of culprits is as long as the world record-holding Trans-Siberian Railway.

As noted by the president, the vast majority of the media rushed to smear Sandmann and his peers Saturday, falsely accusing them of harassing and mocking Philips and chanting “build the wall.”

Saturday evening on CNN, commentator S.E. Cupp lashed out at the purported “mob” of students, saying without evidence that they were “clearly … not getting a good education” and accusing their parents of being failures “because it makes little sense to angrily change ‘build the wall’ to a population with literally zero illegal immigrants who were here long before we were.”

Sunday morning on MSNBC, commentator Michael Steele likened the students to the KKK and Nazis.

“We’ve come a long, long way from the — of the days of dogs — police dogs and fire hoses and lynchings and those types of things but those activities take different forms today and they manifest themselves very differently,” he said. “The KKK, the Nazis, they aren’t running around in hoods and burning crosses. They’re getting tiki torches and wearing Izods and pullovers.”

This is just a small sliver of the media’s false reports and rhetoric, some of which were published on Twitter. Some also threatened the Covington kids with violence.

This is so toxic. pic.twitter.com/Y7rw4uELWg

“Where were the adults?” Really? Adults brought those MAGA children to the March for Life. Maintaining white supremacy and ending reproductive choice have long been part of the same fight. It is like that old Louis Jordan song. Like beans and cornbread, they go hand in hand.

A big part of toxic masculinity is teaching boys to bond over the shared humiliation of people they perceive to be vulnerable.

The list goes on for days, as do the apologies that began pouring in promptly after the real story emerged:

Hey guys. Seeing all the additional videos now, and I 100% regret reacting too quickly to the Covington story. I wish I’d had the fuller picture before weighing in, and I’m truly sorry.

Yesterday, we sent out a poorly worded tweet with this story. We have deleted that tweet. https://t.co/X2kzdhcK0f

What remains unclear is whether the students have a valid legal case. According to former New York City prosecutor Ronn Blitzer, it depends on a couple different factors.

“Statements of opinion are protected speech,” he noted Monday. “That means if someone merely gave their take on the actual facts, that would likely be okay. Presenting a factually inaccurate version of the events, however, is something different. Typically, to prove a defamation case, one needs to show that a statement of fact was false, defamatory, and caused harm.”

“Those who reasonably relied on the information that was out there, however, could be in the clear if they later made corrections, since defamation laws generally have a standard of negligence when it comes to private citizens. If they had no reason to believe that what they were saying was wrong, they may not be liable. Of course, once new information came to light, those who didn’t correct inaccurate accounts or continued to present them could be in trouble.”

The latter statement is key. Any mainstream media outlets that haven’t corrected their initial reports on the Lincoln Memorial incident could face serious legal repercussions.

Case in point, as noted by attorney Robert Barnes, who’s offered to represent the students for free:

I will represent the kids for free if they want to sue @maggieNYT for obvious libel. https://t.co/VmqVqIVNoe

There are dozens of students laughing and egging on the behavior. Will be interesting to see if anyone is actually expelled, as officials suggest is possible https://t.co/l7kjDOxiS7

Haberman, a “journalist” for The New York Times known for her egregiously irresponsible reporting, may want to consider lawyering up pronto.