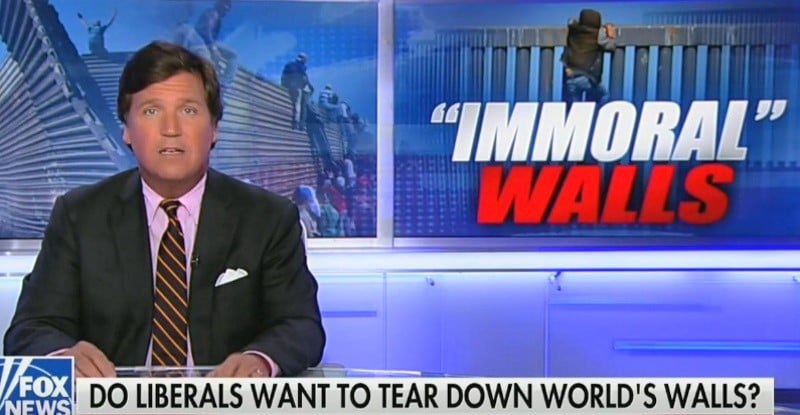 Fox News host Tucker Carlson urged Congresswoman Nancy Pelosi and other open-borders Democrats to practice what they preach. How? By tearing down the walls protecting their lavish mansions.

Tucker says this must be done because walls are “immoral,” according to the new leftist orthodoxy.

Obama, Pelosi and Soros Must Tear Down Their Walls

“Let’s concede that walls are, in fact, inherently immoral,” Carlson said on Tucker Carlson Tonight. “How do we respond once we have accepted that?”

“We can’t simply prevent Donald Trump from building a wall. That’s not enough. We have got to do something about the countless walls of wickedness that degrade and pollute America’s polar landscape.

For example, the wall that keeps poor people out of Barack Obama’s home in Washington. The wall that protects George Soros’ place in South Hampton.

The wall at the Pelosi compound in Napa Valley, not to mention the wall around Mark Zuckerberg’s estate in Hawaii. The gated communities of Brentwood, the walls and gardens of Brooklyn.

Level them all! All of them. Make them flat. In fact, do it tonight before an angry god turns us all to pillars of salt for ignoring his ‘anti-wall commandment.’

Speaker Pelosi, tear down these walls!”

Let’s Tear Down Israel and Jordan’s Walls Too

Carlson continued by saying why stop at tearing down all the “immoral” walls in the US? We should also tear down everyone’s walls all around the globe.

Once have you done that, turn the bulldozer of righteousness outward to the world.

Israel, for example, surrounded by walls on all sides. Does Nancy Pelosi know that? Would she withhold billions in military aid until those walls are gone? What’s a moral question now. What’s the answer?

How about Tunisia and Jordan? We helped pay for those countries’ walls. Will we pay to take them down? How much do we really care about our souls?

We contacted the Speaker today to find out. She didn’t reply. Neither did the other Democrats we called.

It turns out they have no plan to eliminate anyone else’s walls and certainly not their own. They just don’t want a wall to protect America. They don’t think our country deserves that.”

NY Times Activist: US Should Get Rid of Borders

Tucker then noted that the New York Times recently published an op-ed by an open-borders columnist named Farhad Manjoo. Manjoo, who’s of Indian descent, was born in South Africa and emigrated to California in the late 1980s. He says the United States should get rid of borders completely.

“Just yesterday, the New York Times ran a piece by a man called Farhad Manjoo. He demanded US get rid of borders entirely.

It’s not our right to keep them out. It’s only our obligation to pay for it. That’s the Democrats’ position. They are telling us that God agrees with them.”

Flashback: When Barack Obama first moved into his posh Washington DC neighborhood in 2017, the first thing he did was to build a wall around it.

And this is how Nancy Pelosi responds to “refugees” who seek sanctuary on her lavish California estate: She calls the cops to have them “deported” off her property.