As the threat of a government shutdown looms amid ongoing disputes about the federal budget, Democrat Senator Chuck Schumer once again vowed to obstruct President Trump’s border wall.

“President Trump should understand that there are not the votes for the wall in the House or the Senate,” Schumer said on “Meet the Press.” “He is not going to get the wall in any form.”

Schumer said Democrats won’t give President Trump an inch to secure the US border, which would cut down on illegal drugs, human trafficking, MS-13 gang activity, and widespread abuse of the US welfare system.

We should not let a temper tantrum and threats push us in the direction of doing something that everybody knows is wrong.

If the President wants to debate the wall next year, he can. I don’t think he’ll get it. He shouldn’t use innocent workers as hostages to throw a bone to his base.”

“Throw a bone to his base?” Really?

White House senior adviser Stephen Miller said all Americans must support the border wall because our national sovereignty is at stake.

“This is a very fundamental issue,” Miller told CBS News. “At stake is the question of whether or not the United States remains a sovereign country. The Democrat Party has a simple choice: They can either choose to fight for America’s working class or to promote illegal immigration. You can’t do both.” 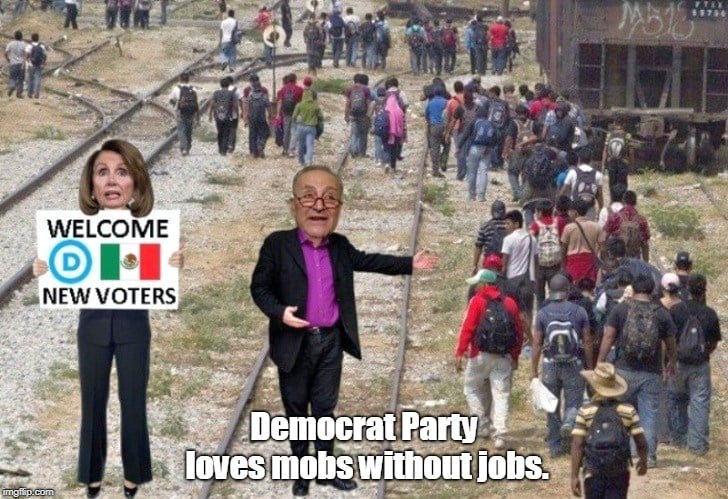 At the time, Trump said he would “be proud” to take responsibility for a government shutdown, because the wall is too important to put on the backburner again.

Meanwhile, they blithely ignore that illegal immigration costs US taxpayers more than $113 billion. Every. Single. Year.

Chuck Schumer and many Democrats supported immigration reform and enhanced border security — including a wall — as recently as 2009, when Schumer said: “Illegal immigration is wrong, plain and simple.”

Schumer also argued that the media and Democrats should not use euphemisms to downplay the illegality of illegal immigration:

“When we use phrases like ‘undocumented workers,’ we convey a message to the American people that their government is not serious about combating illegal immigration — which the American people overwhelmingly oppose. It is illegal and wrong and we have to change it.”

Fast-forward to the present, and the Democrats are suddenly championing open borders and mass illegal immigration. Why? First, to obstruct Trump. And second, to increase their voting bloc after they alienated the middle class and increasing numbers of minority voters, who feel used and betrayed by the Democrat Party.

David Rubin, the former mayor of Shiloh, Israel, urged the United States to build a wall to protect its borders, saying Israelis are thrilled with their wall because it has slashed their illegal immigration down to ZERO.

Rubin said many Israelis initially complained about the wall — the same way American liberals do today — but they’re happy now because illegal immigration has vanished.

“Some of the Israeli left were complaining and even accusing the Israeli government of racism, but now, nobody is complaining,” Rubin said. “Everybody is happy that we don’t have illegal immigration.”

Trump may declare national emergency to build wall. Sounds like a great plan, but is it legal?