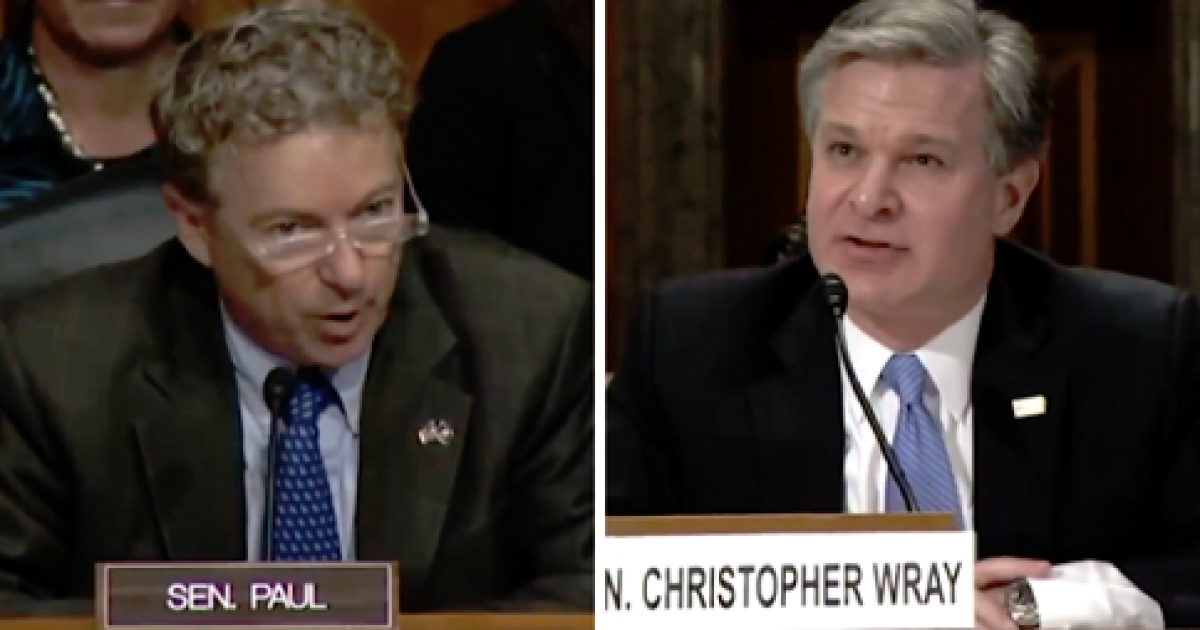 Federal Bureau of Investigation Director Chris Wray did not answer when asked if the FBI or the National Security Agency is currently collecting President Donald Trump’s phone conversations.

“Do you think that it’s possible that the president’s conversations with international leaders are in the [Foreign Intelligence Surveillance Act] database?” Paul asked.

“I’m not sure there’s anything I could speak to in this setting,” the FBI director said.

Paul responded to say the Washington Post reported about two years ago there were 1,500 times when then-President Obama “was minimized meaning that, yes, you are gathering up so much information – you, the NSA, the intelligence community – that actually the president’s conversations are caught up in there.”

After their exchange, the libertarian-minded Paul took to Twitter to call for reforms on how intelligence agencies collect data, suggesting that if the president is not safe from “bad actors,” none of us are.

“The FBI Director just testified in the US Senate. I asked him if @realDonaldTrump phone conversations are getting collected in the FISA database. He wouldn’t answer. Is NSA or FBI listening in on our President? We know bad actors exist within intel community. REFORM NEEDED NOW,” he tweeted.

🚨 The FBI Director just testified in the US Senate. I asked him if @realDonaldTrump phone conversations are getting collected in the FISA database. He wouldn't answer. Is NSA or FBI listening in on our President? We know bad actors exist within intel community. REFORM NEEDED NOW

Paul would also ask if members of Congress are in the FISA database from when they conduct international calls.

“Well, senator, I am quite confident that we are conducting ourselves in a manner consistent with the law and the Constitution that’s subject to extensive oversight,” Wray said. “I don’t know that I can speak to every hypothetical about whether there have been [such] situations.”

After asking the same question about journalists and businessmen, Paul brought up fired FBI agent Peter Strzok’s name and “his girlfriend,” a reference to ex-FBI lawyer Lisa Page, as he addressed his concerns.

“You’ve had people bringing their politics to work,” he told Wray. “The concern of us who want more control over what you do and how you look at data is, as Madison said, ‘men are not angels,’ that’s why we have the Constitution.”

“That’s why we ask you to get a warrant,” the Republican lawmaker continued. “The information you’ve gathered in the foreign database is not constitutional in the sense that it’s gathered with no bar, there is no warrant, there is no constitutional matter to that data. And yet, you’re going to then use it on domestic crime. That has been our complaint for years and years and years.”