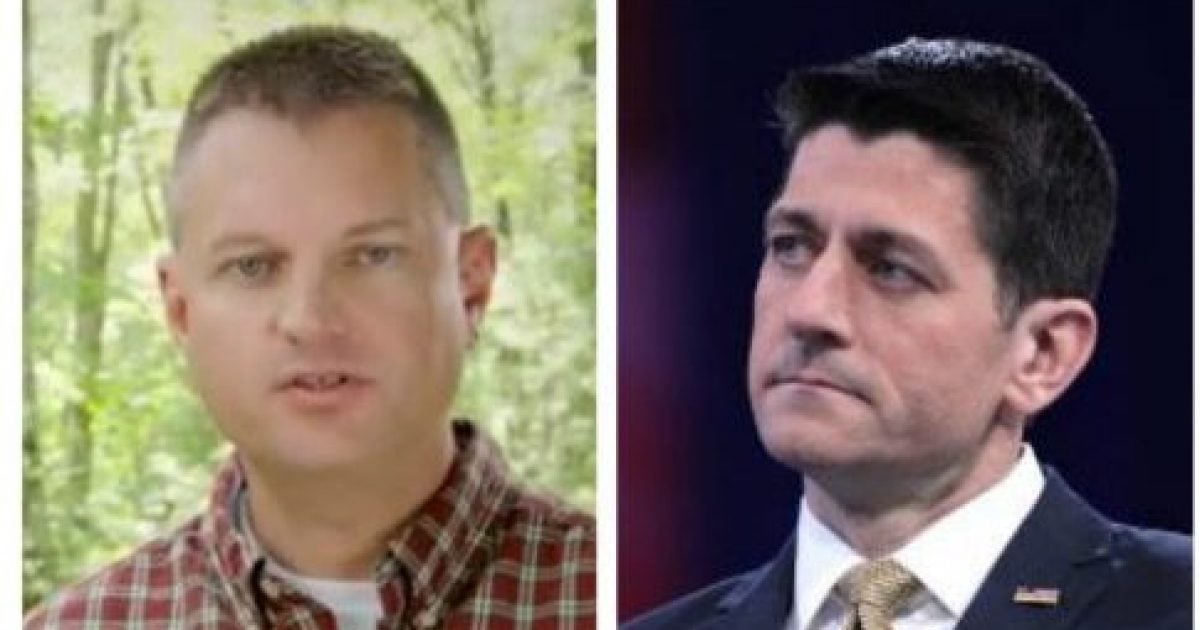 A Wisconsin political ad has sparked a family feud with a Democratic candidate’s mother coming to his defense and blasting House Speaker Paul Ryan.

While Milwaukee Police Officer James Bryce never mentions his brother’s name in the video ad, the candidate’s arrest record and a past tweet about police are featured during the 30-second clip in which Bryce calls out “cop-hating rhetoric,” sharing how he has been to three cops’ funerals in two years.

“When people refer to police officers as terrorists, that hits a little close to home,” James Bryce said in the ad. “I don’t think people want to be represented by someone who’s shown contempt for those in law enforcement. That’s one of the many reasons why I’m voting for Bryan Steil for Congress.”

The video was funded by the Congressional Leadership Fund, a group affiliated with House Speaker Paul Ryan who  announced earlier this year that he would not be seeking re-election to the Wisconsin seat which Democrat Randy Bryce and Republican Bryan Steil are now vying for.

Nancy Bryce demanded that Steil remove the attack ad, slamming the Republican group for using her sons as political “tools” in a scathing letter, according to the Journal Sentinel.

“I’m used to my sons getting into disagreements with each other — every mom is. And I understand that my boys see the world differently when it comes to politics,” she wrote.

“There is now a group of people from Washington who consider it a good idea to pit my boys against each other for their own political gain. But they didn’t consider a mother’s pain at seeing her children used as tools in a political fight, splashed with millions of dollars of ads across the airwaves,” she added.

David Keith, Bryce’s campaign manager, noted that the mother was upset over the ad but added that despite their different political views, the brothers were together on a family vacation recently.

“We’re waiting for Bryan Steil to see if he agrees with destroying someone’s family or not,” Keith said.

Steil did not directly answer a question from FOX6 News on whether the Congressional Leadership Fund should take down the ad.

“I’m not focused on third-party groups. I’m focused on my campaign, what I can offer and discussing the issues,” he said.

“Bryan Steil, demand this ad be taken off the air. This goes too far,” Bryce’s mother wrote in her letter. “However the election turns out, politics should not be handled like this.”

Bryce added that she was proud of her children’s “independent, albeit different, world views.”

“Unfortunately, some political operatives see it as a chance to exploit those differences for their own benefit,” she said in the letter which also noted how “proud” she is of Randy, a veteran and cancer survivor.

“I am also proud to be the wife of a law enforcement officer, and I am proud of the way we raised all our children. And when Randy told me he was running for Congress, I was so proud and eager to support him,” she wrote.

The mother’s passionate letter declared she would not allow anyone to take “cheap shots” at her family.

“I might be getting up in years, but I still have some fight in me, and I’m not going to let these people take cheap shots at my boys. I think it might help for people to know the truth,” she wrote. “Randy and James’ father was a police officer, and Randy is proud to come from a family of law enforcement officials. He also stands for justice and fairness, and speaks up when he sees a wrong being committed.”

Michael Byerly, a spokesman for the Congressional Leadership Fund, disagreed.

“This ad explains everything Wisconsin voters need to know about the race. Randy Bryce is unfit to serve in Congress,” he said, according to the Journal Sentinel. Besides his nine arrests, Bryce has also come under fire for taking years to pay off debts like delinquent child support owed to his ex-wife.

But Nancy Bryce directed her wrath at the Republican Party, and pointed a finger at Rep. Paul Ryan.

“I am disappointed and, frankly, disgusted that we are at a point where the Republican Party is so focused on sowing division in our families and communities, with such little regard for the truth,” she wrote. “Shame on this ‘super PAC’ for running these ads, shame on its leader Paul Ryan for funding them, and shame on people of good conscience who choose to sit idly by and watch this pain inflicted upon a family in the name of partisan politics.”