Democrats want to show that they’re the “Party For Women” by barraging Senator Susan Collins’ staffers (many of whom are female) with abusive phone calls, emails, and letters threatening rape and assault if Collins votes to approve the confirmation of Supreme Court nominee Brett Kavanaugh.

Collins is a Republican who is pro-choice and is considered a swing vote who can be pressured by her predominantly liberal Maine constituency. As a result, all six of Collins’ offices in Maine have been bombarded with vulgar, abusive, and threatening phone calls, letters, emails, and visitors, News Center Maine reported.

One caller told a 25-year-old female staffer that he hoped she “would be raped and impregnated.”

Another caller left a sickening voicemail saying: “If you care at all about women’s choice, vote ‘no’ on Kavanaugh. Don’t be a dumb b*tch. F*** you also.” 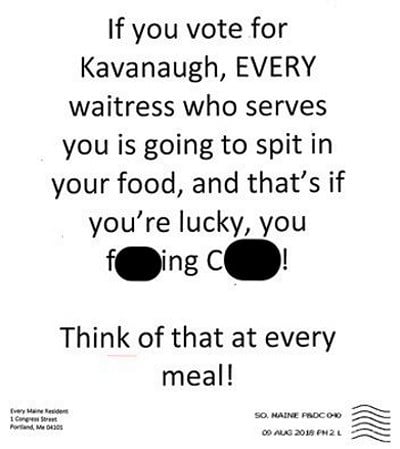 In an August 9 letter sent to Collins’ Portland, Maine, office, the writer made this threat: “If you vote for Kavanaugh, EVERY waitress who serves you is going to spit in your food, and that’s if you’re lucky, you f***ing c***!”

Liberal protesters also mailed 3,000 coat hangers to one of Collins’ offices (a reference to back-alley abortions). Even more alarming is that protesters showed up last weekend at Senator Collins’ private home in Bangor, Maine, and demonstrated outside.

Collins is also being blackmailed by a left-wing activist who raised $1 million in a crowd-funding campaign. The anti-Trump “resistance” activist told Collins that if she votes to confirm Kavanaugh, he will give the money to whoever challenges her Senate seat in 2020.

Senator Collins responded by saying she will not give in to threats or bribes. “This quid-pro-quo fundraising campaign appears to be the equivalent of an attempt to bribe me,” she said. “Attempts at bribery or extortion will not influence my vote at all.”

As BizPac Review previously reported, liberals have pulled out all the stops to obstruct the nomination of Brett Kavanaugh, including paying protesters to disrupt his Senate confirmation hearing last week.

Kavanaugh was already confirmed back in 2006 by many of the same Democrats who are opposing his SCOTUS nomination now, when he was appointed a federal appeals judge.

All these histrionics are useless anyway because Republicans have the numbers in the Senate to confirm Kavanaugh right now. So good job, libs!