To the delight of many patriots, President Trump invited 200 bikers in from the rain to hang out with him at the Trump National Golf Club in Bedminster, New Jersey, on Saturday.

The “Bikers for Trump” arrived to show their support for the president, and Trump seemed appreciative with his unconventional gesture of hospitality. While the bikers likely went home to relay a great story to their friends and family, the media has been busy picking apart anything they could find to try to nail Trump for the event.

Lo and behold, the biker patch with a sexist theme. Shocked and surprised? Hardly, but the Washington Post zeroed in on a photo of Trump taken with a biker who wore a patch that upon close inspection said, “I Love Guns … & Titties.”

In one of the most pathetic photos I've ever seen, Trump poses and mugs like a jackass with a biker wearing a patch that says "I ♥ GUNS & TITTIES". pic.twitter.com/92YcvR1qyX

Off-color to be certain, but these are bikers we’re talking about and anyone who might pretend to be shocked is either living under rock or is feigning their dismay.

Anne Gearan of WaPo reported that admin. staff members usually vet guests that meet with the president to prevent “any embarrassments,” but it was unclear if the procedure had taken place.

This wasn’t the only offending patch that was picked out after photos of the event became available.

Another one reportedly read “This is America. We eat meat, we drink beer and we speak [expletive] English,” according to WaPo. Yet another patch read, “Terrorist Hunting Permit.”

No doubt, the shout out to the NRA that can be seen above the sexist patch didn’t help endear the bikers to the liberal media.

My brain: Trump has nothing in common with bikers.

Trump's brain: I totally understand the bikers through this sweet patch. pic.twitter.com/XuD8WNi48T

Andy Ostroy, a self-described political junkie and fan of “female filmmakers” was particularly upset with the patches.

Can you f**king imagine how Repubs' heads would be exploding if #Obama had stood at the WH with a bunch of biker thugs wearing patches that bragged about killing people and "liking titties?" The evangelicals must be very proud today… #Trump #Charlottesville pic.twitter.com/VmamID13RY

That is a ridiculous comment – Obama wouldn’t step near a biker rally.

And the patch controversy has taken on a life of its own on social media. Below a Twitter user accuses Trump of covering up a Confederate patch. The tweet has thousands of gullible retweets and likes, even though there isn’t any proof:

No other president would entertain these criminal, racist, misogynist bikers. Jackets are littered with patches expressing these views. If you look close, you will see Trump covering the confederate patch for the photo #AMJoy #Maddow #TheLastWord pic.twitter.com/awMRq5Cxqf

Meanwhile, a simple screen grab shows that the biker’s patch does not appear to be “Confederate” related. 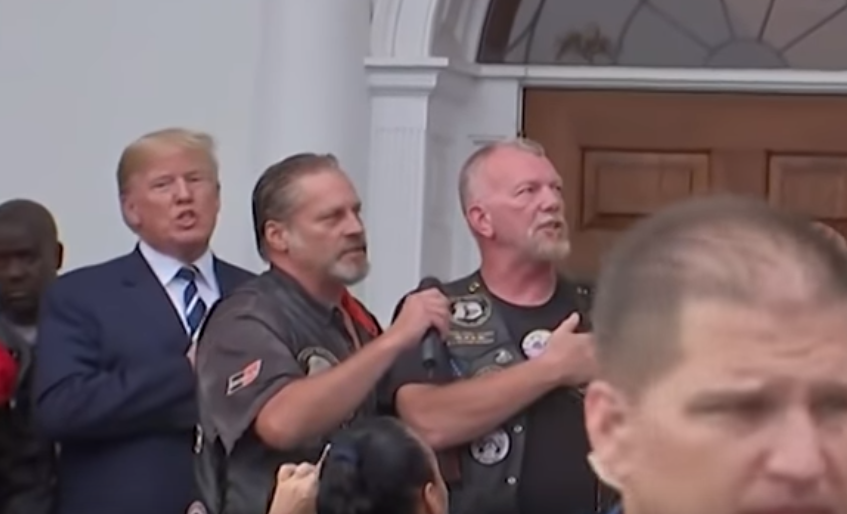 In fact, it was reportedly a Harley racing patch, but too late, the damage was done, as noted by the “apology” that received a mere sprinkling of ‘likes’ and retweets.

I just realized it but as you said the rest is correct. My eyes, are going. My new readers are 50% stronger than my last ones. ☹️