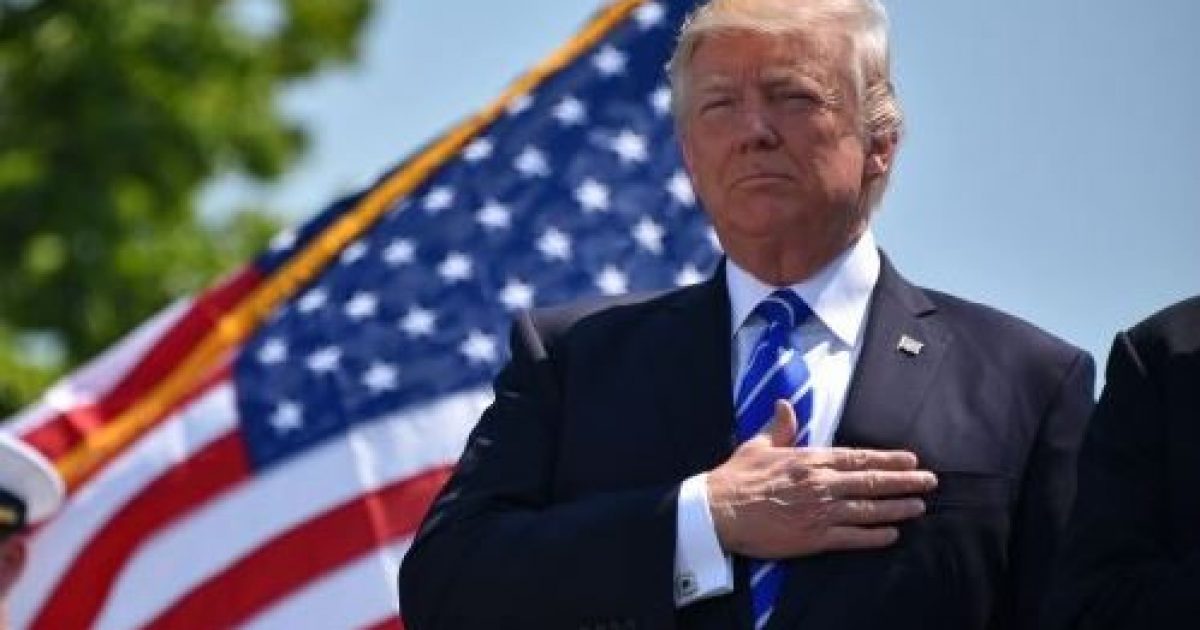 President Donald Trump “can’t believe” the debate over NFL players who protest during the national anthem is “alive and well” and offered his own solution to the issue.

The president took to Twitter to criticize the latest policy from the National Football League and to call for commissioner Roger Goodell to take some action.

“The NFL National Anthem Debate is alive and well again – can’t believe it! Isn’t it in contract that players must stand at attention, hand on heart?” Trump tweeted on Friday, reigniting his criticism of the NFL and suggesting his own penalties for protesting players.

Although players are not required to “stand at attention, hand on heart,” as the president noted,  NFL owners did vote back in May that any players who wished to protest had to remain in the locker room during the national anthem.

The policy prompted the NFL Players Association to file a grievance against the league, claiming the athletes’ rights were being infringed upon. The new anthem rule was scheduled to take effect for the 2018 season.

Trump’s tweet came just one day after a report by the Associated Press on the preliminary team policy of the Miami Dolphins which said anthem protests could lead to fines as well as suspensions. The report lead to backlash which prompted a statement by the team as well as one by the NFL and NFL Players Association.

“In order to allow this constructive dialogue to continue,” the statement read, according to The Daily Caller, “we have come to a standstill agreement on the N.F.L.P.A.’s grievance and on the N.F.L.’s anthem policy. No new rules relating to the anthem will be issued or enforced for the next several weeks while these confidential discussions are ongoing.”

And it seems likely Trump will continue to comment on the decisions by the teams and the owners when it comes to respecting the national anthem and the American flag.

Thanks for your thoughts, but we’ll take it from here. https://t.co/j7TQ4vhcJz

Giants co-owner Steve Tisch also criticized the president’s comments, saying he has “no understanding” of the reason for the protests.

“He has no understanding of why they take a knee or why they’re protesting,” Tisch told the Hollywood Reporter, adding that he hopes the president finds other things to worry about by the time the 2018 season kicks off.

“Hopefully, he’ll have much more going on that he’s going have to deal with and should deal with and must deal with than worrying about what NFL players do,” Tisch said. “When the new season starts, I hope his priorities are not criticizing the NFL and telling owners what to do and what not to do.”

But for patriotic Americans, the issue is an important one and they backed the president’s sentiments on Twitter.

This is a winning political issue for Trump and his base as midterms approach. Incredible the NFL has bungled this issue so badly that it is still going on three years after it started. https://t.co/t1njWQfwVA

What have the players done this off season? Kneeling hasn’t done and won’t do jack. It’s so disrespectful no one even remembers why they’re doing it. Go to your state capitol and talk to lawmakers. I could respect that. Kneeling and doing nothing is so much easier though

Go for it man,.,., just start another fight and watch ticket sales drop. We are already sick of your attitudes towards President Trump. Notice Tampa bay is NOT financing the new Rays Stadium???? coming attractions for NFL. No Tax Payer money.. all gone.

@realDonaldTrump & the American People know full well what your interpretation of the kneeling stunt is all about. NFL however, refuses to see that we, your fans, view it as disrespect of those who have died in defense of our country…So, we will continue to #BoycottTheNFL ??

The NFL has no understanding of their fan base, can’t blame Trump for that.