A black man walked into Starbucks and demanded free coffee as “reparations” in response to the recent incident in Philadelphia, where two black men were arrested after attempting to use the restroom at an outlet without making a purchase.

But it doesn’t appear that reparations is what the man, identified as vlogger Bryan Sharpe, is really out for? Instead, Sharpe appears to be mocking how ridiculous the hypersensitivity over race is in post-Obama America.

“I heard y’all was racist, so I came to get my free coffee,” Sharpe tells a young white barista, when he reaches the counter.

He instantly gets a sympathetic response, with the young lady eager to prove she’s hip to the new scene.

“Not our store!” she declares, before saying she has been following the Philadelphia story on social media. 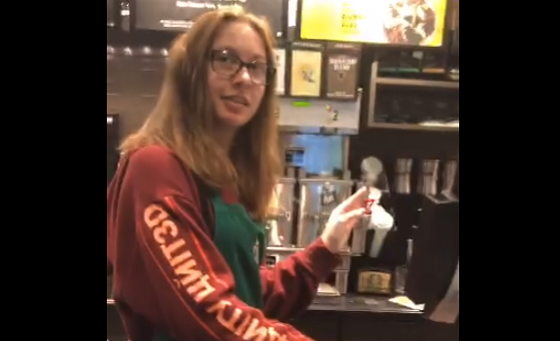 “I heard you guys don’t like black people, so I came to get my Starbucks reparations voucher,” Sharpe tells her.

“Is that a real thing?” the barista asks, before agreeing to serve him a free coffee.

“Yea, I need a free coffee,” Sharpe tells her, after assuring her it is a real thing — it is not.

“Gotta get my reparations for being black in America,” he adds. “Black lives matter!”

There’s a young boy with Sharpe, witnesses the whole thing. What message he takes away from it all is unclear.

“Black privilege gets me free coffee. I love racism,” Sharpe says toward the end. “Only in America.”

Sharpe has a number of videos criticizing liberals on his page, insisting “the evil left controls us all,” according to The Blaze.

He spoke with the conservative news outlet after his stunt went viral. And it turns out, that’s just what it was — a stunt.

“Racism is a business,” he said. “Thanks to the ridiculousness of BLM activists, it’s the new publicity stunt — and I think I just proved it.”

As for the aforementioned hypersensitivity, The Blaze noted that after the incident in Philadelphia, Starbucks plans to close 8,000 stores on May 29 to provide racial-bias training to its employees.

For what it’s worth, the two men were arrested after refusing to leave the store when not granted access to the restroom — the employees were following company policy that the facility is for paying customers only. But for the color of their skin…