Ben Shapiro’s critical view of the ABC sitcom “Roseanne” and its portrayal of Trump voters earned him a jab from the show’s star.

The show’s reboot returned to huge television ratings this week after a two decade absence, re-introducing the main character played by Roseanne Barr whom audiences learned is a “deplorable” who voted for President Trump. Barr got a personal call from the president after at least 18.2 million viewers tuned in on the night of the show’s return.

The Daily Wire’s Shapiro argued that, in fact, there was a clear reason for the success of the episode.

There is a reason the critics love the “Roseanne” reboot, and it’s not because the reboot respects Trump voters. (/1)

It’s because the reboot recasts Trump voters as social Leftists who just disagree about economics. It turns conservatives into populists. (/2)

He went on to argue that the reboot does not accurately portray the Trump voter, but is “a Hollywood fantasy of what Trump voters are.”

The whole premise of “Roseanne” is that this pro-abortion, pro-LGBT woman who is happy to watch her grandson wear girls’ clothing voted Trump — because she’s blue collar. That isn’t an accurate depiction of Trump voters. (/3)

It’s actually a Hollywood fantasy of what Trump voters are: people who agree with Hollywood elites on values, but just disagree on economics because they’re old white factory workers. (/4)

Shapiro’s take on the show resulted in a wave on commentary on Twitter.

I like Ben Shapiro, but he understands zippo about working class Americans.

And even caught the attention of Barr who called Shapiro “all hat and no cattle.” Tweets continued to debate Shapiro’s points and criticize his remarks.

No gratitude at all.

What the hell is Ben’s deal??? I can’t stand that he hates Trump.

I think @benshapiro is flat out lying.

Here’s a clip. @therealroseanne is being brave and embracing a social dialogue. pic.twitter.com/YBEGBfEnz3

Reactions to Shapiro’s conclusions reverberated on Twitter as many agreed that the episode was just right.

And this is why the show actually doesn’t bring the country together or unify us. There are real, significant cultural differences that drive votes. We’re not one economic program away from unity. That’s Hollywood flattering itself. (/6)

It is hilarious watching a never Trumper (Ben Shapiro) try and explain who the Trump supporters are. Roseanne’s depiction of a Trump supporter is very realistic. We are all different but we love our country and we want a POTUS who loves his country and wants to #MAGA.

The win for the new show is getting people across the Political spectrum to have a civil discussion about everything going on in America.

The show was great! Ben just gets too lost in being a pundit 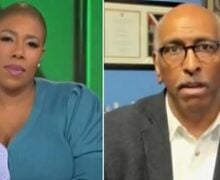