Conservative commentator Ben Shapiro issued a stern warning to Republicans, saying the 2018 midterm elections could get “very, very ugly” for the GOP if they don’t get their acts together and focus on winning.

“In the seven special elections held in 2017, the average shift from 2016 results was D+16,” Shapiro tweeted Tuesday night. “Tonight, it’s D+20. 2018 will be very, very ugly unless something cataclysmic happens for GOP.”

The editor-in-chief of the Daily Wire made the observations while analyzing the Pennsylvania special election, where Democratic upstart Conor Lamb narrowly beat GOP candidate Rick Saccone a surprisingly tough race.

Saccone struggled in a district where Trump had trounced Hillary Clinton by 20 points. Naturally, Democrats blamed Trump for Saccone’s poor performance, and gleefully gloated that this is a sign of things to come for the 2018 midterms.

Meanwhile, liberals forget that Democrats lost more than 1,030 seats during Barack Obama’s tenure, and they never blamed him for it. 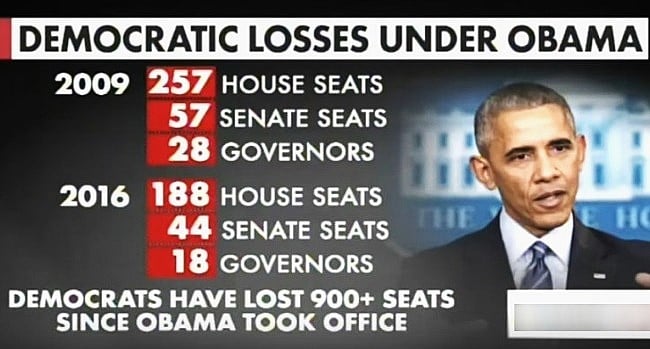 Shapiro said Republicans should be doing better than this in special elections since they have the wind at their back, namely, a strong economy.

Worth noting: all the normal factors should be cutting in GOP favor, outside of being the party in power. The economy is good, and we have no serious foreign crises. Which says that the popularity of the president is a serious factor in Democratic turnout.

Shapiro also dismissed comments saying Lamb did well because he used the “wolf in sheep’s clothing” tactic of running as a veiled Republican in a red-leaning district.

Lamb is a gun owner who enthusiastically supports the Second Amendment and favors Trump’s tariffs. He also distanced himself from Far-Left leaders in his own party, like Nancy Pelosi. These are the stances that appeal to voters in his district.

Shapiro said the GOP is in trouble if they’re able to groom candidates like Conor Lamb, who’s shrewd enough to figure out how to win in Trump-leaning districts. “If Democrats are smart enough to run non-Pelosi types in red districts, that will exacerbate the GOP wipeout,” he said.

And as @ezraklein notes, there are 118 Republican-held seats that went for Trump by fewer points than PA-18. The vast majority will go Republican, of course. But Dems only need 24.

If Democrats win 24 seats in the 2018 midterms, they will take control of the House.

While the scenario Ben Shapiro paints is dismal, the fact is, the Lamb-Saccone race only underscores what President Trump’s victory over Hillary spotlighted, which is that candidates matter.

In the Georgia special election this summer, Republican Roy Moore was beaten by Doug Jones because Moore was a mediocre candidate embroiled by scandal. Keep in mind that Trump did not endorse Moore in the primaries; he backed his opponent, Luther Strange.

In yesterday’s Pennsylvania race, dullard Saccone took on a young, telegenic, energetic newcomer. The contrast between the two candidates could not have been more stark.

In this instance, a Lamb victory isn’t bad news for President Trump because Lamb supports key aspects of the Trump agenda, namely, protecting the Second Amendment and tariffs.

Moreover, Trump has been obstructed by both Democrats and members of his own party, so getting rid of non-supportive Republicans (“draining the swamp”) may not be a bad thing for his presidency.

Having control of both the Senate and the House of Representatives has really not helped Trump because “Republicans” like John McCain, Jeff Flake, and Susan Collins have openly criticized him and opposed his agenda.

So the real question for Republicans is: Do they care more about obstructing Trump or defeating Democrats? The choice is theirs.

Trump will remain unaffected by midterm election outcomes because he has been singlehandedly fighting for his pro-America agenda from Day One. And that’s not going to change no matter what happens in the congressional game of musical chairs. So bring it.

“When people treat me badly or unfairly or try to take advantage of me, my general attitude, all my life, has been to fight back very hard. The risk is you’ll make a bad situation worse.

But my experience is that if you’re fighting for something you believe in — even if it means alienating some people along the way — things usually work out for the best in the end.” (Donald Trump quote from The Art of the Deal.)