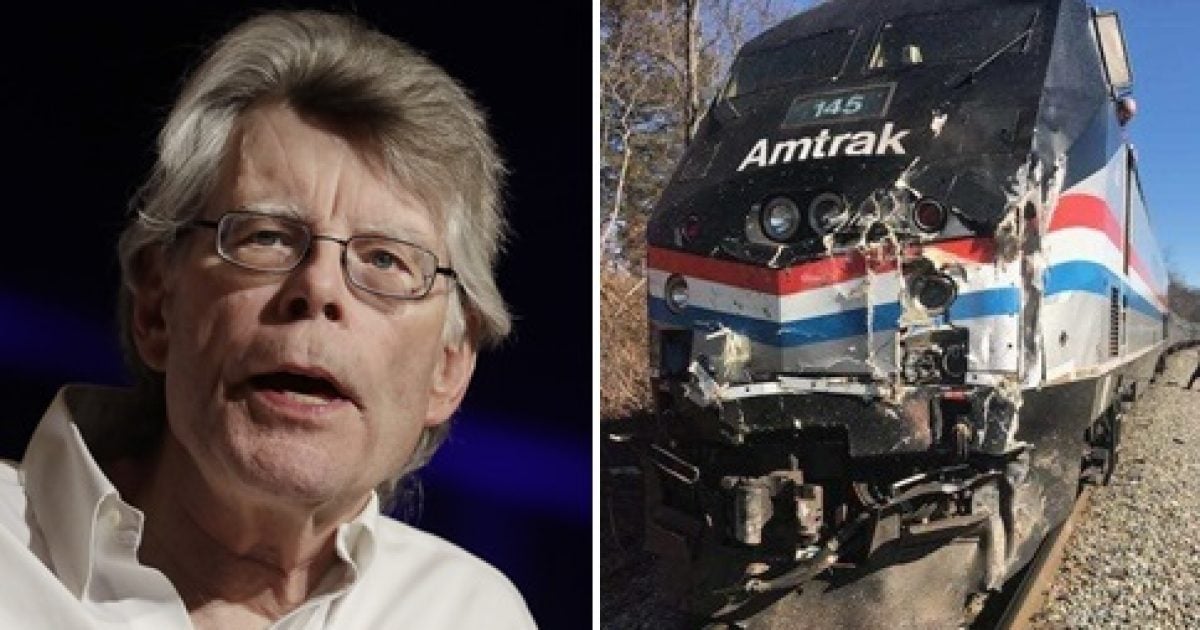 Some people really need to think before they tweet.

Novelist Stephen King received backlash on Twitter after a tweet in which he described Wednesday’s fatal train crash carrying Republican congressmen to a party retreat “karma.”

A trainload of Republicans on their way to a pricey retreat hit a garbage truck. My friend Russ calls that karma.

“A trainload of Republicans on their way to a pricey retreat hit a garbage truck,” King wrote on Thursday. “My friend Russ calls that karma.”

The Amtrak train was transporting the lawmakers to a GOP retreat focused on planning the 2018 legislative agenda when it collided with a garbage truck in West Virginia.

Prominent Republicans, including House Speaker Paul Ryan (WI) and Sen. Jeff Flake (AZ), were on board at the time of the crash.

The passenger of the truck, 28-year-old Christopher Foley, died from his injuries, WTVR reported.

There was a fatality in that wreck. But, yeah, laugh it up.

You think a train crashing & killing someone is a good thing & it’s “karma”, as your prior tweet stated, I think it indicates a severely fucked-up mind. pic.twitter.com/wDegBiSYwX

What do you suppose the family of the truck driver that was killed calls it?

Later on Thursday, the “It” author called his “karma” tweet “thoughtless.”

A rather thoughtless tweet from me concerning the train-truck crash, for which I apologize (if one is necessary). It should be pointed out, too, that those Republican politicians, who can be heartless when they vote, immediately got out to help.

“A rather thoughtless tweet from me concerning the train-truck crash, for which I apologize (if one is necessary). It should be pointed out, too, that those Republican politicians, who can be heartless when they vote, immediately got out to help.”

Rep. Roger Marshall (R-KS), an obstetrician, was on the scene providing first aid to the injured.

The train hit a garbage truck, they're asking for doctors on the trains to help. Right now Dr. Marshall is helping people who are injured.

King has been a frequent critic of President Trump. Last year, he mocked the president’s accusation that the FBI spied on him

Not only did Obama tap Trump's phones, he stole the strawberry ice cream out of the mess locker.

It was since reported that the FBI obtained a FISA warrant to perform surveillance on at least one Trump associate, former adviser Carter Page.

Also on Thursday, King fit a jab at President Trump’s taxes in between his tweets about the train crash.

Molly, aka the Thing of Evil, discovers Donald Trump's tax returns. Wants to know what "bark-ruptcies" are. pic.twitter.com/8qOcS2y9Mp

Even after his apology, King, continued to be criticized.

Too little too late, SK. You’re off my list. ashamed to be fellow alum of UMAINE.

Worst “apology” ever. I think as a writer and a human being, you could have done better.

Too late! Your real thoughts came through. Throwing your books in the trash. “People” like you are why I THANK GOD that I left the democrap party in 1983. Get help!

Write books more, Tweet less. Many people, me included, love your books and we voted for President Trump and for GOP most of the time. Tweet was so heartless and unnecessary.

Well, yes, an apology IS necessary.

“if one is necessary”. Nice non-apology, Speed bump.