President Trump received stellar reviews on his first SOTU address, wowing both Republicans and Independents with his tough but optimistic speech.

A whopping 97% of Republicans approved of Trump’s State of the Union address, while a stunning 72% of Independents did, according to a CBS News poll. 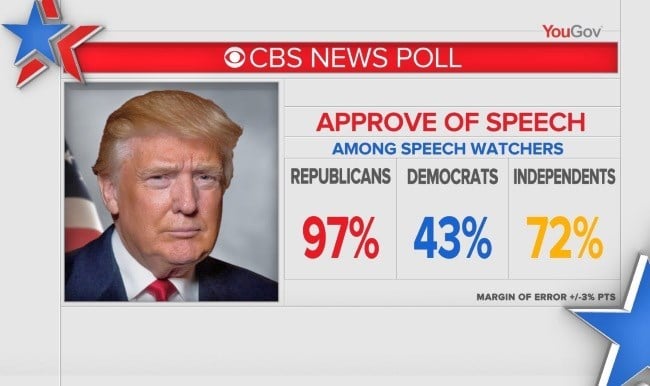 Among Democrats, a surprising 43% approved of the SOTU address, which drew a full 30 minutes of applause inside the House Chamber.

Meanwhile, 3 in 4 Americans approved of President Trump’s State of the Union address, while just one-quarter disapproved. Of the 1,178 Americans polled by CBS News, 8 in 10 felt the president was trying to unite the country, rather than divide it.

Some 65% said Trump’s SOTU address made them feel proud, while just 21% (probably bitter liberals) said the speech made them angry.

Overall, it was an excellent result, and one President Trump can be very happy with. The Trump State of the Union address was the most tweeted-about in history (Twitter launched in 2008).

Fox News’ Brit Hume said “it will be interesting to see how it polls in a couple of days when the sample includes people who didn’t watch the speech but heard about it from the [anti-Trump] media.”

This is interesting. It will also be interesting to see how it polls in a couple of days when the sample includes people who didn’t watch the speech but heard about it from the media. https://t.co/lgiJRuDCAu

Radio host Dana Loesch was surprised by the overwhelming approval the SOTU got from Independents, tweeting: “Whoa.” She added: “This was a strong speech by POTUS.”

This was a strong speech by POTUS and had the right tone. #sotu

Twitter had some hilarious reactions to the SOTU. Many viewers remarked that Congressman Joe Kennedy III appeared to be drooling when he gave the Democratic rebuttal.

"Let the attention be on [Trump's] slobbering self."
–@NancyPelosi, pre speech, instructing the dems on how to react to the #SOTU  speech

Ms. Pelosi, I only observed one person "slobbering"–and it wasn't @realDonaldTrump pic.twitter.com/VfXQCgJuAm

Marco Rubio had dry-mouth during his #SOTU response in 2013.

House Minority Leader Nancy Pelosi raised eyebrows for apparently playing with her dentures while scowling in the audience.

“Nancy Pelosi is playing with her dentures again and not applauding when Trump calls for unity between the two parties,” conservative commentator Mark Dice quipped.

Another Twitter user noted: “Between Nancy Pelosi’s dentures barely hanging on and joe Kennedy’s spittle mouth, is proof that trump’s pro America speech sent the democrats into a fit of rabies-like symptoms.”

Then, there’s the laundry list of pro-America things Democrats refused to applaud:

This powerful image of a North Korean defector raising his crutches in defiance of Kim Jong Un’s brutal regime brought both Democrats and Republicans to their feet.

Ji Seong-ho’s triumphant gesture captured both his unvanquished spirit and the unshakable resolve of the American people.

The powerful image of a young man, lifting his crutches in defiance of a North Korean regime that once tortured him. I will never forget this moment.

Speaking of North Korea, one viewer pointed out: “The Warmbiers. Obama did nothing for Otto. At least Trump brought him home.”

President Trump summed up the evening best when he said: “My duty, and the sacred duty of every elected official in this chamber, is to defend Americans, to protect their safety, their families, their communities, and their right to the American Dream.  Because Americans are dreamers too.”

.@POTUS: “My duty, and the sacred duty of every elected official in this chamber is to defend Americans…because Americans are dreamers too.” #SOTU https://t.co/bSKVTnBRxv pic.twitter.com/6KeAWWBQBH