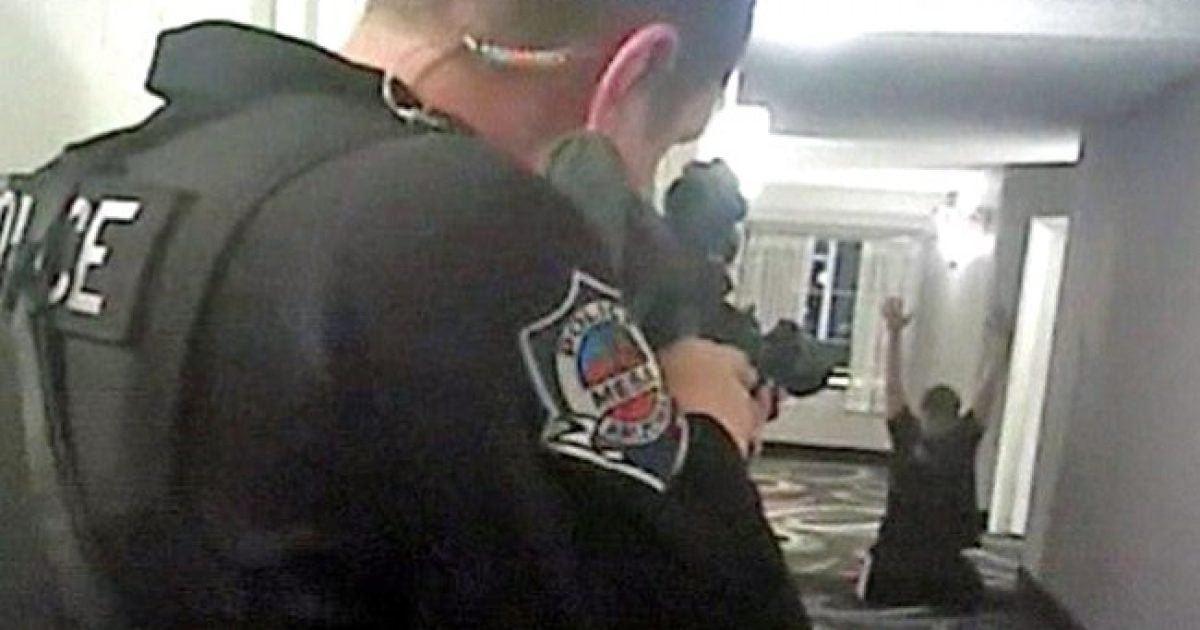 Americans are horrified after seeing a video of Arizona cop Philip Brailsford fatally shooting unarmed Daniel Shaver in a hotel hallway as Shaver begs for his life.

“I’m sorry. Please do not shoot me,” Shaver, 26, sobbed shortly before his body gets riddled with bullets.

In the graphic viral video (see below), Brailsford is heard telling Shaver to lie on the ground without moving.

Shaver obeys, but is gunned down moments after he appears to move his hand. That’s when Brailsford opens fire at Shaver, whose dead body slumps over after being shot multiple times.

In January 2016, six police officers responded to a call at La Quinta Inn and Suites in Mesa, Arizona, after guests reported seeing a man with a gun in the window of a fifth-floor room.

No gun was found on Shaver’s dead body, but two air rifles were found in his room. Prosecutors said Shaver, a married father of two, used the pellet rifles as part of his job as a pest-control worker.

On December 8, a jury acquitted Philip Brailsford, 27, of second-degree murder after concluding that he reacted the way any other police officer would have under similar circumstances.

At trial, Brailsford claimed he feared for his life and thought Shaver was reaching for a gun. His acquittal has angered many Americans, who felt the damning video proved he reacted with excessive force.

There were no protests or riots following Brailsford’s acquittal, perhaps because the victim was white. Shaver’s killing contradicts the liberal media narrative promoted by “activists” like Colin Kaepernick that police officers are racists who only target black men. Where was Shaver’s “white privilege?”

Daniel Shaver’s widow and parents have filed wrongful death lawsuits against the city of Mesa. Attorneys not affiliated with the lawsuits told BizPac Review the plaintiffs will likely get millions in damages.